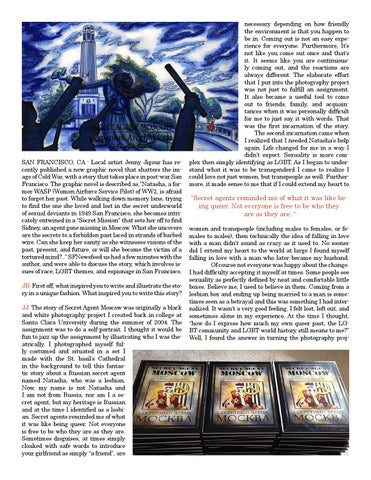 SAN FRANCISCO, CA - Local artist Jenny Jigour has recently published a new graphic novel that shatters the image of Cold War, with a story that takes place in post-war San Francisco. The graphic novel is described as,”Natasha, a former WASP (Women Airforce Service Pilot) of WW2, is afraid to forget her past. While walking down memory lane, trying to find the one she loved and lost in the secret underworld of sexual deviants in 1949 San Francisco, she becomes intricately entwined in a “Secret Mission” that sets her off to find Sidney, an agent gone missing in Moscow. What she uncovers are the secrets to a forbidden past laced in strands of barbed wire. Can she keep her sanity as she witnesses visions of the past, present, and future, or will she become the victim of a tortured mind?..” SFNewsfeed.us had a few minutes with the author, and were able to discuss the story, which involves issues of race, LGBT themes, and espionage in San Francisco. JB: First off, what inspired you to write and illustrate the story in a unique fashion. What inspired you to write this story? JJ: The story of Secret Agent Moscow was originally a black and white photography project I created back in college at Santa Clara University during the summer of 2004. The assignment was to do a self-portrait. I thought it would be fun to jazz up the assignment by illustrating who I was theatrically. I photographed myself fully costumed and situated in a set I made with the St. basil’s Cathedral in the background to tell this fantastic story about a Russian secret agent named Natasha, who was a lesbian. Now, my name is not Natasha and I am not from Russia, nor am I a secret agent, but my heritage is Russian and at the time I identified as a lesbian. Secret agents reminded me of what it was like being queer. Not everyone is free to be who they are as they are. Sometimes disguises, at times simply cloaked with safe words to introduce your girlfriend as simply “a friend”, are

necessary depending on how friendly the environment is that you happen to be in. Coming out is not an easy experience for everyone. Furthermore, It’s not like you come out once and that’s it. It seems like you are continuously coming out, and the reactions are always different. The elaborate effort that I put into the photography project was not just to fulfill an assignment. It also became a useful tool to come out to friends, family, and acquaintances when it was personally difficult for me to just say it with words. That was the first incarnation of the story. The second incarnation came when I realized that I needed Natasha’s help again. Life changed for me in a way I didn’t expect. Sexuality is more complex then simply identifying as LGBT. As I began to understand what it was to be transgenderd I came to realize I could love not just women, but transpeople as well. Furthermore, it made sense to me that if I could extend my heart to

“Secret agents reminded me of what it was like being queer. Not everyone is free to be who they are as they are. “ women and transpeople (including males to females, or females to males), then technically the idea of falling in love with a man didn’t sound as crazy as it used to. No sooner did I extend my heart to the world at large I found myself falling in love with a man who later became my husband. Of course not everyone was happy about the change. I had difficulty accepting it myself at times. Some people see sexuality as perfectly defined by neat and comfortable little boxes. Believe me, I used to believe in them. Coming from a lesbian box and ending up being married to a man is sometimes seen as a betrayal and this was something I had internalized. It wasn’t a very good feeling. I felt lost, left out, and sometimes alone in my experience. At the time I thought, “how do I express how much my own queer past, the LGBT community and LGBT world history still means to me?” Well, I found the answer in turning the photography proj-