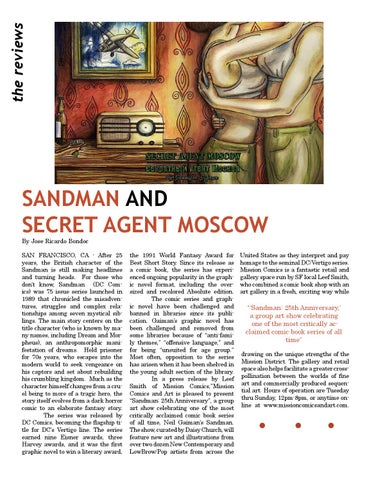 SAN FRANCISCO, CA - After 25 years, the British character of the Sandman is still making headlines and turning heads. For those who don’t know, Sandman (DC Comics) was 75 issue series launched in 1989 that chronicled the misadventures, struggles and complex relationships among seven mystical siblings. The main story centers on the title character (who is known by many names, including Dream and Morpheus), an anthropomorphic manifestation of dreams. Held prisoner for 70s years, who escapes into the modern world to seek vengeance on his captors and set about rebuilding his crumbling kingdom. Much as the character himself changes from a cruel being to more of a tragic hero, the story itself evolves from a dark horror comic to an elaborate fantasy story. The series was released by DC Comics, becoming the flagship title for DC’s Vertigo line. The series earned nine Eisner awards, three Harvey awards, and it was the first graphic novel to win a literary award,

the 1991 World Fantasy Award for Best Short Story. Since its release as a comic book, the series has experienced ongoing popularity in the graphic novel format, including the oversized and recolored Absolute edition. The comic series and graphic novel have been challenged and banned in libraries since its publication. Gaiman’s graphic novel has been challenged and removed from some libraries because of “anti-family themes,” “offensive language,” and for being “unsuited for age group.” Most often, opposition to the series has arisen when it has been shelved in the young adult section of the library. In a press release by Leef Smith of Mission Comics,”Mission Comics and Art is pleased to present “Sandman: 25th Anniversary”, a group art show celebrating one of the most critically acclaimed comic book series of all time, Neil Gaiman’s Sandman. The show, curated by Daisy Church, will feature new art and illustrations from over two dozen New Contemporary and LowBrow/Pop artists from across the

United States as they interpret and pay homage to the seminal DC/Vertigo series. Mission Comics is a fantastic retail and gallery space run by SF local Leef Smith, who combined a comic book shop with an art gallery in a fresh, exciting way while

“‘Sandman: 25th Anniversary,’ a group art show celebrating one of the most critically acclaimed comic book series of all time” drawing on the unique strengths of the Mission District. The gallery and retail space also helps facilitate a greater crosspollination between the worlds of fine art and commercially produced sequential art. Hours of operation are Tuesday thru Sunday, 12pm-8pm, or anytime online at www.missioncomicsandart.com.