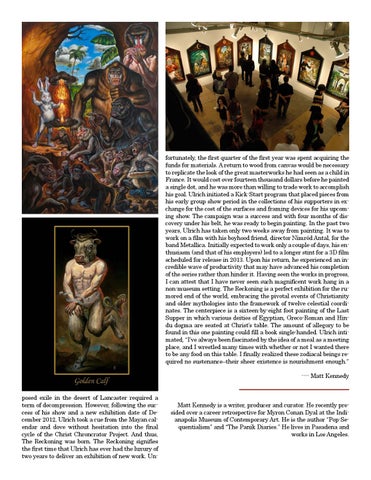 fortunately, the first quarter of the first year was spent acquiring the funds for materials. A return to wood from canvas would be necessary to replicate the look of the great masterworks he had seen as a child in France. It would cost over fourteen thousand dollars before he painted a single dot, and he was more than willing to trade work to accomplish his goal. Ulrich initiated a Kick-Start program that placed pieces from his early group show period in the collections of his supporters in exchange for the cost of the surfaces and framing devices for his upcoming show. the campaign was a success and with four months of discovery under his belt, he was ready to begin painting. In the past two years, Ulrich has taken only two weeks away from painting. It was to work on a film with his boyhood friend, director Nimród Antal, for the band Metallica. Initially expected to work only a couple of days, his enthusiasm (and that of his employers) led to a longer stint for a 3D film scheduled for release in 2013. Upon his return, he experienced an incredible wave of productivity that may have advanced his completion of the series rather than hinder it. Having seen the works in progress, I can attest that I have never seen such magnificent work hang in a non-museum setting. the reckoning is a perfect exhibition for the rumored end of the world, embracing the pivotal events of Christianity and older mythologies into the framework of twelve celestial coordinates. the centerpiece is a sixteen-by-eight foot painting of the Last Supper in which various deities of Egyptian, Greco-roman and Hindu dogma are seated at Christ’s table. the amount of allegory to be found in this one painting could fill a book single-handed. Ulrich intimated, “I’ve always been fascinated by the idea of a meal as a meeting place, and I wrestled many times with whether or not I wanted there to be any food on this table. I finally realized these zodiacal beings required no sustenance–their sheer existence is nourishment enough.” ---- Matt Kennedy posed exile in the desert of Lancaster required a term of decompression. However, following the success of his show and a new exhibition date of December 2012, Ulrich took a cue from the Mayan calendar and dove without hesitation into the final cycle of the Christ Chroncrator Project. And thus, the reckoning was born. the reckoning signifies the first time that Ulrich has ever had the luxury of two years to deliver an exhibition of new work. Un-

Matt Kennedy is a writer, producer and curator. He recently presided over a career retrospective for Myron Conan Dyal at the Indianapolis Museum of Contemporary Art. He is the author “Pop-Sequentialism” and “the Panik Diaries.” He lives in Pasadena and works in Los Angeles.