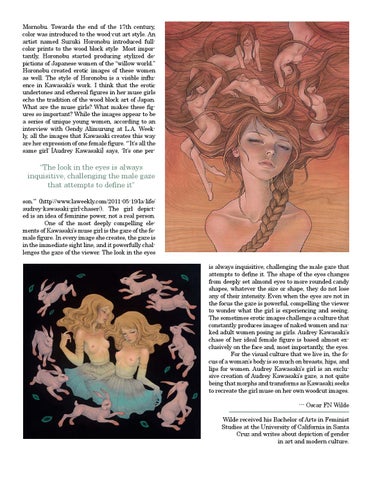 “the look in the eyes is always inquisitive, challenging the male gaze that attempts to define it” son.’” (http://www.laweekly.com/2011-05-19/la-life/ audrey-kawasaki-girl-chaser/). the girl depicted is an idea of feminine power, not a real person. One of the most deeply compelling elements of kawasaki’s muse girl is the gaze of the female figure. In every image she creates, the gaze is in the immediate sight line, and it powerfully challenges the gaze of the viewer. the look in the eyes is always inquisitive, challenging the male gaze that attempts to define it. The shape of the eyes changes from deeply set almond eyes to more rounded candy shapes, whatever the size or shape, they do not lose any of their intensity. even when the eyes are not in the focus the gaze is powerful, compelling the viewer to wonder what the girl is experiencing and seeing. the sometimes erotic images challenge a culture that constantly produces images of naked women and naked adult women posing as girls. audrey kawasaki’s chase of her ideal female figure is based almost exclusively on the face and, most importantly, the eyes. For the visual culture that we live in, the focus of a woman’s body is so much on breasts, hips, and lips for women. audrey kawasaki’s girl is an exclusive creation of audrey kawasaki’s gaze, a not quite being that morphs and transforms as kawasaki seeks to recreate the girl muse on her own woodcut images. --- Oscar FN Wilde Wilde received his Bachelor of arts in Feminist Studies at the University of California in Santa Cruz and writes about depiction of gender in art and modern culture.