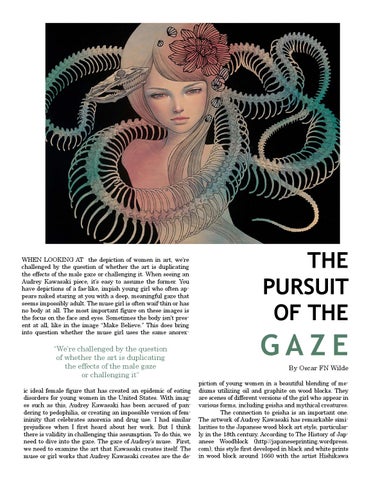 WheN lOOkiNg at the depiction of women in art, we’re challenged by the question of whether the art is duplicating the effects of the male gaze or challenging it. When seeing an audrey kawasaki piece, it’s easy to assume the former. You have depictions of a fae-like, impish young girl who often appears naked staring at you with a deep, meaningful gaze that seems impossibly adult. the muse girl is often waif-thin or has no body at all. The most important figure on these images is the focus on the face and eyes. Sometimes the body isn’t present at all, like in the image “Make Believe.” this does bring into question whether the muse girl uses the same anorex-

“We’re challenged by the question of whether the art is duplicating the effects of the male gaze or challenging it” ic ideal female figure that has created an epidemic of eating disorders for young women in the United States. With images such as this, audrey kawasaki has been accused of pandering to pedophilia, or creating an impossible version of femininity that celebrates anorexia and drug use. i had similar prejudices when I first heard about her work. But I think there is validity in challenging this assumption. to do this, we need to dive into the gaze. the gaze of audrey’s muse. First, we need to examine the art that kawasaki creates itself. the muse or girl works that audrey kawasaki creates are the de-

The PursuiT of The

piction of young women in a beautiful blending of mediums utilizing oil and graphite on wood blocks. they are scenes of different versions of the girl who appear in various forms, including geisha and mythical creatures. the connection to geisha is an important one. the artwork of audrey kawasaki has remarkable similarities to the Japanese wood block art style, particularly in the 18th century. according to the history of Japanese Woodblock (http://japaneseprinting.wordpress. com), this style first developed in black and white prints in wood block around 1660 with the artist hishikawa