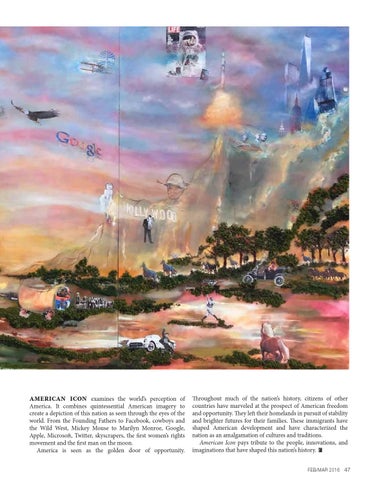 American Icon examines the world’s perception of America. It combines quintessential American imagery to create a depiction of this nation as seen through the eyes of the world. From the Founding Fathers to Facebook, cowboys and the Wild West, Mickey Mouse to Marilyn Monroe, Google, Apple, Microsoft, Twitter, skyscrapers, the first women’s rights movement and the first man on the moon. America is seen as the golden door of opportunity.

Throughout much of the nation’s history, citizens of other countries have marveled at the prospect of American freedom and opportunity. They left their homelands in pursuit of stability and brighter futures for their families. These immigrants have shaped American development and have characterized the nation as an amalgamation of cultures and traditions. American Icon pays tribute to the people, innovations, and imaginations that have shaped this nation’s history. FEB/MAR 2016 47