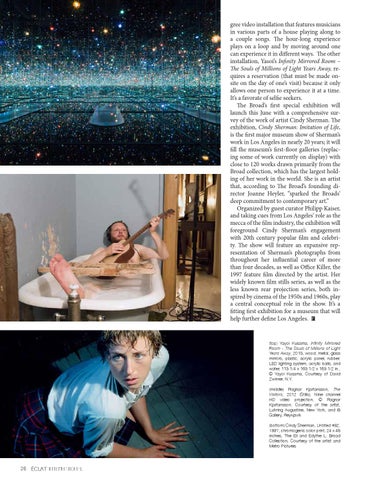 gree video installation that features musicians in various parts of a house playing along to a couple songs. The hour-long experience plays on a loop and by moving around one can experience it in different ways. The other installation, Yasoi’s Infinity Mirrored Room – The Souls of Millions of Light Years Away, requires a reservation (that must be made onsite on the day of one’s visit) because it only allows one person to experience it at a time. It’s a favorate of selfie seekers. The Broad’s first special exhibition will launch this June with a comprehensive survey of the work of artist Cindy Sherman. The exhibition, Cindy Sherman: Imitation of Life, is the first major museum show of Sherman’s work in Los Angeles in nearly 20 years; it will fill the museum’s first-floor galleries (replacing some of work currently on display) with close to 120 works drawn primarily from the Broad collection, which has the largest holding of her work in the world. She is an artist that, according to The Broad’s founding director Joanne Heyler, “sparked the Broads’ deep commitment to contemporary art.” Organized by guest curator Philipp Kaiser, and taking cues from Los Angeles’ role as the mecca of the film industry, the exhibition will foreground Cindy Sherman’s engagement with 20th century popular film and celebrity. The show will feature an expansive representation of Sherman’s photographs from throughout her influential career of more than four decades, as well as Office Killer, the 1997 feature film directed by the artist. Her widely known film stills series, as well as the less known rear projection series, both inspired by cinema of the 1950s and 1960s, play a central conceptual role in the show. It’s a fitting first exhibition for a museum that will help further define Los Angeles.