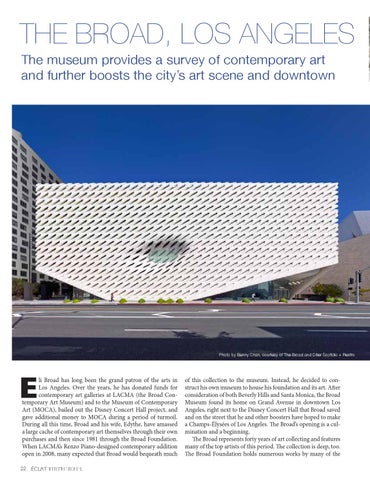 THE BROAD, LOS ANGELES The museum provides a survey of contemporary art and further boosts the city’s art scene and downtown

Photo by Benny Chan, courtesy of The Broad and DIller Scofidio + Renfro

li Broad has long been the grand patron of the arts in Los Angeles. Over the years, he has donated funds for contemporary art galleries at LACMA (the Broad Contemporary Art Museum) and to the Museum of Contemporary Art (MOCA), bailed out the Disney Concert Hall project, and gave additional money to MOCA during a period of turmoil. During all this time, Broad and his wife, Edythe, have amassed a large cache of contemporary art themselves through their own purchases and then since 1981 through the Broad Foundation. When LACMA’s Renzo Piano-designed contemporary addition open in 2008, many expected that Broad would bequeath much

of this collection to the museum. Instead, he decided to construct his own museum to house his foundation and its art. After consideration of both Beverly Hills and Santa Monica, the Broad Museum found its home on Grand Avenue in downtown Los Angeles, right next to the Disney Concert Hall that Broad saved and on the street that he and other boosters have hoped to make a Champs-Élysées of Los Angeles. The Broad’s opening is a culmination and a beginning. The Broad represents forty years of art collecting and features many of the top artists of this period. The collection is deep, too. The Broad Foundation holds numerous works by many of the