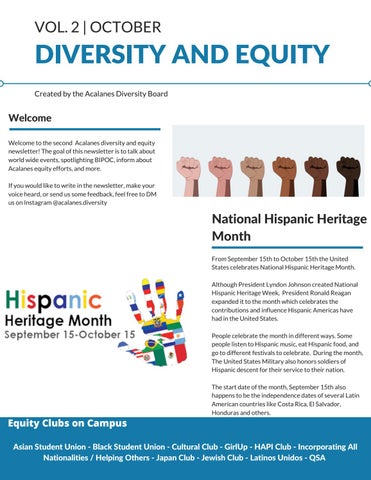 DIVERSITY AND EQUITY Created by the Acalanes Diversity Board

Welcome Welcome to the second Acalanes diversity and equity newsletter! The goal of this newsletter is to talk about world wide events, spotlighting BIPOC, inform about Acalanes equity efforts, and more. If you would like to write in the newsletter, make your voice heard, or send us some feedback, feel free to DM us on Instagram @acalanes.diversity

Highlighting Albert John Luthuli Through his work as president-general of the African National Congress (ANC), Albert John Luthuli fought for civil rights for millions of people during apartheid in South Africa. As an advocate for equality and peace among all men, Luthuli connected the bridge between the culture of South Africa and the religious culture of Europe. Much like Nelson Mandela’s, Luthuli’s struggle against racial discrimination came with setbacks and arrests; none of which ended his battle for civil rights.To acknowledge his fight against apartheid, Luthuli was awarded the Nobel Peace Prize in 1961. In 1948, the policy of apartheid was adopted by the National Party in South Africa. Apartheid, meaning “apartness” in Afrikaans, was a series of laws created to separate the people of South Africa and limit their freedom. Through the Race Classification Act, people were forced to take a test to classify them into different races disregarding their heritage or country of origin. The Mixed Marriages Act prohibited interracial marriage. To separate South Africans even further, the Group Areas Act forced certain people of certain races to live in certain neighborhoods.

In response to apartheid, Luthuli led nonviolent campaigns to protest discriminatory laws through his position at the ANC. The government quickly sought to impede his leadership by banning him from his public meetings for two years. Throughout his years as president-general, he was banned on a total of four occasions. His fourth ban forced him to permanently leave his home. Though these attempts to minimize his leadership, Luthuli continued to fight for human rights.

Luthuli was awarded the Nobel Peace Prize in 1961 for his struggle against racial discrimination. His autobiography, “Let my people go”, was published in 1962, and tells of his journey as an activist. Not long after, Luthuli was nominated president for the South African Colored People’s Congress. The National Union Family Day theme announced of African Students named him honorary By James Lopez president. In addition, his name appeared on human rights petitions presented to the UN. As a A parent-teacher man of hope Parent-teacher conferences and peace, Luthuli quotes, “may the conference, parent-teacher supplement information day come soon, when thethe people of the world will interview or parents' conveyed by reporteffectively cards by stamp rouse themselves, and together evening, is a short meeting focusing oninstudents' specific out any or threat to peace whatever quarter of conference between the strengths and weaknesses in the world it may be found.” parents and teachers of individual subjects and students to discuss children's generalizing the level of interhttps://www.nobelprize.org/prizes/peace/1960/lutul progress at school and find curricular skills and i/biographical/ solutions to academic or competences. behavioral problems. https://luthulimuseum.org.za/achievementsnobel-

For more information about Albert John Luthuli visit these sites:

History- The Birmingham Children's Crusade The Children’s Crusade was a peaceful protest in Birmingham, Alabama that took place on May 2, 1963. On this day, thousands of African American children marched on the streets to protest segregation. Bermingham was one of the most segregated cities at the time, and one of the many black students that lived there and went to the Children’s Crusade was Gwendolyn Webb. Although Webb was just 14 at the time she vividly remembers all of the signs that controlled her life growing up. Webb recalls her young self wanting to "know what the different tastes of the water was. Why was it white water, and colored water when all of it looked the same coming through the spout?” One of Martin Luther King Jr. associates, Rev. James Bevel set up and helped recruit for the march. During the march, thousands of children walked in protest of segregation. However, police soon came to stop the march. Children endured water pressure hitting them, being bitten by dogs, and rough treatment from the police. The police arrested many children whom spent days in jails before their parents could get them. Months after the march, President John F. Kennedy proposed the Civil Rights Act of 1964 that banned discrimination. Although, Kennedy was assassinated before he could sign it, President Lyndon Johnson succeeded him and signed the act, effectively banning segregation.

National Coming Out Day By the Queer Straight Alliance Club National Coming Out Day is October 11! This day works to increase awareness of the LGBTQ+ community and their identities, as well as celebrate everyone in the community, regardless of whether they’re in the closet or not. Coming out, or coming out of the closet, is when a member of the LGBTQ+ community reveals to someone that they are not straight or not their assigned gender at birth. Coming out is often a scary experience, and a lot of people fear not being accepted, or worse, being kicked out of their home or becoming subject to verbal and physical abuse. What should you do when someone comes out to you? Primarily, you should let them talk as much or a little as they want; some people may want to tell you all about how they discovered their sexuality or gender, and others might want to say “I’m ___” and be done with it. Match their energy: if they’re excited, be excited with them! If they are subdued, be subdued in your response. You should voice your acceptance and work to be a safe person for them to talk to. If someone comes out to you, they trust you enough to tell you a very personal thing, and you must take care of that information. Ask the person who came out who else knows and how secret this is, and respect their wishes with who else they are okay with knowing this information. Finally, independently from that conversation, educate yourself on the LGBTQ+ community and how to be a good ally to them. National Coming Out Day is a celebration of all people’s coming out stories and a moment in so many LGBTQ+ people’s lives. 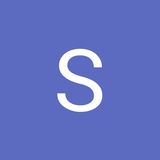