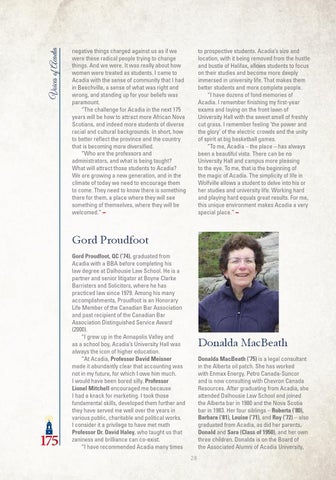 negative things charged against us as if we were these radical people trying to change things. And we were. It was really about how women were treated as students. I came to Acadia with the sense of community that I had in Beechville, a sense of what was right and wrong, and standing up for your beliefs was paramount. “The challenge for Acadia in the next 175 years will be how to attract more African Nova Scotians, and indeed more students of diverse racial and cultural backgrounds. In short, how to better reflect the province and the country that is becoming more diversified. “Who are the professors and administrators, and what is being taught? What will attract those students to Acadia? We are growing a new generation, and in the climate of today we need to encourage them to come. They need to know there is something there for them, a place where they will see something of themselves, where they will be welcomed.” –

to prospective students. Acadia’s size and location, with it being removed from the hustle and bustle of Halifax, allows students to focus on their studies and become more deeply immersed in university life. That makes them better students and more complete people. “I have dozens of fond memories of Acadia. I remember finishing my first-year exams and laying on the front lawn of University Hall with the sweet smell of freshly cut grass. I remember feeling ‘the power and the glory’ of the electric crowds and the unity of spirit at big basketball games. “To me, Acadia – the place – has always been a beautiful vista. There can be no University Hall and campus more pleasing to the eye. To me, that is the beginning of the magic of Acadia. The simplicity of life in Wolfville allows a student to delve into his or her studies and university life. Working hard and playing hard equals great results. For me, this unique environment makes Acadia a very special place.” –

Gord Proudfoot Gord Proudfoot, QC (’74), graduated from Acadia with a BBA before completing his law degree at Dalhousie Law School. He is a partner and senior litigator at Boyne Clarke Barristers and Solicitors, where he has practiced law since 1979. Among his many accomplishments, Proudfoot is an Honorary Life Member of the Canadian Bar Association and past recipient of the Canadian Bar Association Distinguished Service Award (2000). “I grew up in the Annapolis Valley and as a school boy, Acadia’s University Hall was always the icon of higher education. “At Acadia, Professor David Meisner made it abundantly clear that accounting was not in my future, for which I owe him much. I would have been bored silly. Professor Lionel Mitchell encouraged me because I had a knack for marketing. I took those fundamental skills, developed them further and they have served me well over the years in various public, charitable and political works. I consider it a privilege to have met math Professor Dr. David Haley, who taught us that zaniness and brilliance can co-exist. “I have recommended Acadia many times

Donalda MacBeath Donalda MacBeath (’75) is a legal consultant in the Alberta oil patch. She has worked with Enmax Energy, Petro Canada-Suncor and is now consulting with Chevron Canada Resources. After graduating from Acadia, she attended Dalhousie Law School and joined the Alberta bar in 1980 and the Nova Scotia bar in 1983. Her four siblings – Roberta (’80), Barbara (’81), Louise (‘71), and Roy (’72) – also graduated from Acadia, as did her parents, Donald and Sara (Class of 1950), and her own three children. Donalda is on the Board of the Associated Alumni of Acadia University, 28

As Acadia University celebrates its 175th anniversary, we bring you stories and recollections of our people. This is the second in a three-part series. Enjoy. 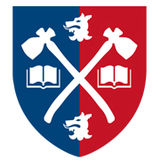