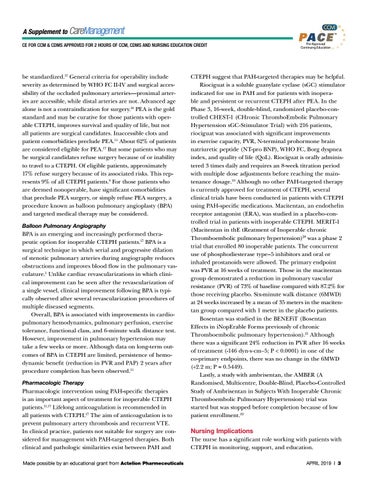 A Supplement to CareManagement CE FOR CCM & CDMS APPROVED FOR 2 HOURS OF CCM, CDMS AND NURSING EDUCATION CREDIT

be standardized.17 General criteria for operability include severity as determined by WHO FC II-IV and surgical accessibility of the occluded pulmonary arteries—proximal arteries are accessible, while distal arteries are not. Advanced age alone is not a contraindication for surgery.18 PEA is the gold standard and may be curative for those patients with operable CTEPH, improves survival and quality of life, but not all patients are surgical candidates. Inaccessible clots and patient comorbidities preclude PEA.11 About 62% of patients are considered eligible for PEA.17 But some patients who may be surgical candidates refuse surgery because of or inability to travel to a CTEPH. Of eligible patients, approximately 17% refuse surgery because of its associated risks. This represents 9% of all CTEPH patients.9 For those patients who are deemed nonoperable, have significant comorbidities that preclude PEA surgery, or simply refuse PEA surgery, a procedure known as balloon pulmonary angioplasty (BPA) and targeted medical therapy may be considered. Balloon Pulmonary Angiography

BPA is an emerging and increasingly performed therapeutic option for inoperable CTEPH patients.17 BPA is a surgical technique in which serial and progressive dilation of stenotic pulmonary arteries during angiography reduces obstructions and improves blood flow in the pulmonary vasculature.1 Unlike cardiac revascularizations in which clinical improvement can be seen after the revascularization of a single vessel, clinical improvement following BPA is typically observed after several revascularization procedures of multiple diseased segments. Overall, BPA is associated with improvements in cardiopulmonary hemodynamics, pulmonary perfusion, exercise tolerance, functional class, and 6-minute walk distance test. However, improvement in pulmonary hypertension may take a few weeks or more. Although data on long-term outcomes of BPA in CTEPH are limited, persistence of hemodynamic benefit (reduction in PVR and PAP) 2 years after procedure completion has been observed.11 Pharmacologic Therapy

Pharmacologic intervention using PAH-specific therapies is an important aspect of treatment for inoperable CTEPH patients.11,17 Lifelong anticoagulation is recommended in all patients with CTEPH.17 The aim of anticoagulation is to prevent pulmonary artery thrombosis and recurrent VTE. In clinical practice, patients not suitable for surgery are considered for management with PAH-targeted therapies. Both clinical and pathologic similarities exist between PAH and Made possible by an educational grant from Actelion Pharmeceuticals

CTEPH suggest that PAH-targeted therapies may be helpful. Riociguat is a soluble guanylate cyclase (sGC) stimulator indicated for use in PAH and for patients with inoperable and persistent or recurrent CTEPH after PEA. In the Phase 3, 16-week, double-blind, randomized placebo-controlled CHEST-1 (CHronic ThromboEmbolic Pulmonary Hypertension sGC-Stimulator Trial) with 216 patients, riociguat was associated with significant improvements in exercise capacity, PVR, N-terminal prohormone brain natriuretic peptide (NT-pro BNP), WHO FC, Borg dyspnea index, and quality of life (QoL). Riociguat is orally administered 3 times daily and requires an 8-week titration period with multiple dose adjustments before reaching the maintenance dosage.19 Although no other PAH-targeted therapy is currently approved for treatment of CTEPH, several clinical trials have been conducted in patients with CTEPH using PAH-specific medications. Macitentan, an endothelin receptor antagonist (ERA), was studied in a placebo-controlled trial in patients with inoperable CTEPH. MERIT-1 (Macitentan in thE tReatment of Inoperable chronic Thromboembolic pulmonary hypertension)20 was a phase 2 trial that enrolled 80 inoperable patients. The concurrent use of phosphodiesterase type–5 inhibitors and oral or inhaled prostanoids were allowed. The primary endpoint was PVR at 16 weeks of treatment. Those in the macitentan group demonstrated a reduction in pulmonary vascular resistance (PVR) of 73% of baseline compared with 87.2% for those receiving placebo. Six-minute walk distance (6MWD) at 24 weeks increased by a mean of 35 meters in the macitentan group compared with 1 meter in the placebo patients. Bosentan was studied in the BENEFiT (Bosentan Effects in iNopErable Forms previously of chronic Thromboembolic pulmonary hypertension).21 Although there was a significant 24% reduction in PVR after 16 weeks of treatment (-146 dyn·s·cm−5; P < 0.0001) in one of the co-primary endpoints, there was no change in the 6MWD (+2.2 m; P = 0.5449). Lastly, a study with ambrisentan, the AMBER (A Randomised, Multicentre, Double-Blind, Placebo-Controlled Study of Ambrisentan in Subjects With Inoperable Chronic Thromboembolic Pulmonary Hypertension) trial was started but was stopped before completion because of low patient enrollment.22

Nursing Implications The nurse has a significant role working with patients with CTEPH in monitoring, support, and education. APRIL 2019 | 3 A special supplement brought to you by ACCM and CareManagement with FREE CEs.

A special supplement brought to you by ACCM and CareManagement with FREE CEs.