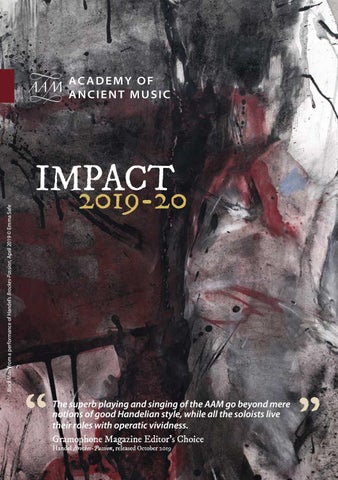 The superb playing and singing of the AAM go beyond mere notions of good Handelian style, while all the soloists live their roles with operatic vividness. Gramophone Magazine Editor’s Choice Handel Brockes-Passion, released October 2019

A message from our Chair

I am delighted to share with you an overview of the Academy of Ancient Music’s achievements during the 2019–20 season: a year that was memorable in many ways. We continued to achieve the highest possible standard in both performance and recordings before the unfortunate early conclusion of the season due to the coronavirus pandemic. Although this was – and continues to be – a very difficult time for AAM, we are grateful for the support of our wonderful audiences. There were many highlights this year as we sought to fulfil our mission to explore, preserve and reveal some of the glories of baroque and classical music. During the first part of the season, we continued to bring little-known works to public attention, firstly through the modern premiere of Dussek’s Messe Solemnelle and secondly, a performance of Eccles’ Semele, both of which were well-received and have been recorded for release in October 2020 and January 2021 respectively. Amongst our new albums on AAM Records, the highlight has to be Handel’s Brockes-Passion which received critical acclaim, achieving Gramophone magazine’s Editor’s Choice and the Sunday Times’ Album of the Week and also reached the top of the specialist classical charts. The new edition of the score and parts we have created has already been shared for another professional performance and our aim is that this will give the work a new lease of life. Investing in high-quality live-streaming of a number of our performances in recent years has proved invaluable in lockdown: while not being able to create music, through our #StreamingSundays initiative we have been able to continue to share our performances online to audiences worldwide. We have also continued to grow our audience on Spotify, with over a million monthly listeners. None of this would have been possible without our loyal supporters, whether individuals, trusts or foundations. Without AAM’s generous supporter family, we would not be able to survive this difficult and unprecedented time for the arts and continue our mission. We have also been acutely aware of the effects of the pandemic on our brilliant musicians, and we are particularly grateful to everyone who has supported our Musicians’ Support Fund, which has put additional funding directly into the pockets of our musicians at this challenging time. From all of us at AAM: thank you for your support, and we hope to see you in the near future as we safely and sustainably return to the concert hall.

CONCERTS Highlights in 2019-20 included: Opening our season with Dussek’s Messe Solemnelle and the Overture and Incidental Music to Beethoven’s Egmont, featuring soprano Chen Reiss and narrator Stephen Fry. An extended tour of our new programme Rejoice, featuring music by Bach, Handel, Purcell and Corelli performed by rising star soprano Rowan Pierce and AAM principal trumpet David Blackadder. Our Cambridge season opener, the programme later featured in a USA mini-tour to Los Angeles and San Francisco in December 2019. A string of acclaimed concerts with violin superstar Viktoria Mullova and young countertenor James Hall, with three UK concerts and a tour of Germany and the Netherlands. A landmark performance and recording of Eccles’ English opera Semele with director Julian Perkins, Cambridge Handel Opera Company and Cambridge Early Music in November. This was the centrepiece of an important research project to prepare, perform, record and share the first professional recording of the work on period instruments. A criticallyacclaimed success, the album is due out in early 2021. The continuation of our hugely successful partnership with internationally renowned vocal ensemble VOCES8, headlined by two sold-out performances of Handel’s Messiah in London and Cambridge, with a further 400,000 viewers watching the performance on Facebook and YouTube. Beginning 2020 with baritone Benjamin Appl and director Masato Suzuki performing Bach’s sacred cantatas, followed in February by sensational French lutenist Thomas Dunford and a tour of Nuremberg and Istanbul with soprano Chen Reiss and conductor Christoph Altstaedt. Sopranos Mary Bevan and Jennifer France joining director Laurence Cummings in March for a programme of Handel arias and virtuoso works, before our season ended in Leeds Town Hall with soprano Soraya Mafi and trumpeter David Blackadder. The creation of digital concert initiatives following the unexpected conclusion of our concert activity in March. Our #StreamingSundays and #SpotifySundays programmes brought audiences full-concert performances and curated recordings, free-of-charge, every weekend, merging the concert hall with the living room during lockdown.

We need the kind of spine-tingling performances you give to keep our spirits bright!

RECORDINGS Our season opening gala performance of JL Dussek’s Messe Solemnelle crowned several years of research and preparation in bringing this extraordinary work to disc. Discovered by AAM’s Music Director Richard Egarr and recorded in the weeks leading up the performance, this landmark album is released in October 2020.

October 2019 saw the release of Handel Brockes-Passion , presenting the main work across two CDs, plus a third disc of additional material, including alternative versions and a partial English translation by Handel’s contemporary Charles Jennens. The accompanying 220-page full-colour booklet includes the original Kurrentschrift text from the manuscript, the sung German libretto, a new translation, images of manuscripts, performance advertisements from the 1700s, scholarly essays and extensive further information about the work and its historical context. The reviews have been tremendous (’... the best in scholarly, interdisciplinary, performancerelated research.’ Opera Today) and the album quickly topped the specialist classical charts.

In November 2019, we embarked on the first recording by a professional ensemble of John Eccles’ Semele with Cambridge Handel Opera Company, Cambridge Early Music, director Julian Perkins and an outstanding cast of soloists. Composed 30 years before Handel’s well-known setting, Eccles’ work sadly faded into obscurity and went unperformed for nearly 250 years. Far more than just a brilliant, inventive setting of William Congreve’s libretto, Semele demonstrates the development of English opera after Purcell, and provides a tantalising glimpse of what the genre might have become, if not for the arrival of Italian opera seria. Containing scholarly essays, leading baroque artists’ depictions of the story of Jupiter and Semele, Stephen Fry’s modern re-telling of the story, autograph manuscript images of Eccles’ score, full libretto texts and much more, this 2-CD, deluxe hardback presentation with 180+ page full-colour book is due to be released in January 2021.

Due for release in spring 2021, our upcoming album of Pergolesi Stabat Mater and Handel Il Duello Amoroso features director Christian Curnyn, soprano Keri Fuge, and countertenor Tim Mead. A masterpiece by one of the eighteenth century’s finest composers, Pergolesi’s Stabat Mater was written when he was just twenty-four, only two years before he passed away. A little-recorded cantata, Handel’s stylish and beautiful Il Duello Amoroso (from 1708, Rome), depicts a lovers’ quarrel between shepherd and shepherdess.

We recorded an album of Beethoven arias with director Richard Egarr and soprano Chen Reiss, released in May 2020 on Onyx Classics. The reviews have been phenomenal: ‘Chen Reiss has made here an important and revelatory contribution to the 250th anniversary of Beethoven’s birth’ (BBC Music Magazine ); ‘This original program, superbly constructed... is a beautiful tribute to the presence of women in Beethoven’s work... the Academy of Ancient Music, under the attentive baton of Richard Egarr, is an ideal setting for this magniﬁcent voice.’ (Crescendo Magazine)

Sir Stephen Cleobury’s final recording – JS Bach’s monumental St Matthew Passion – was released in late May 2020 featuring soloists James Gilchrist, Matthew Rose, the Choir of King’s College Cambridge and the Academy of Ancient Music. A fitting tribute to Sir Stephen’s close association with AAM over many years, reviews were excellent, with The Sunday Times lauding it as ‘a fine account from King’s College, Cambridge’ and BBC Music Magazine highlighting that ’Cleobury steers an assured path between our traditional responses to the St Matthew Passion and one which reﬂects developing performance practices, vocal and instrumental, over the past half century.’

2019-20 in numbers We gave 26 concerts in 18 different UK and European venues to an estimated 10,000 people before activity was unfortunately curtailed, with an estimated 4 million more joining us over radio. Our social media following continued to grow, amassing over 45,000 followers on Facebook, 8,000 followers on Twitter, 16,000 subscribers on YouTube and 2,500 followers on Instagram. We are the most listened-to period instrument ensemble online, surpassing 1 million monthly listeners and 35 million streams of AAM’s recordings in the past year on Spotify, with 50% of those listening under the age of 35. We ambitiously increased our livestream activity, broadcasting a total of 6 concerts on Facebook to over 600,000 viewers, with our Christmas Messiah concert with VOCES8 accumulating nearly 300,000 views within weeks of its release. We launched our #StreamingSundays broadcast series on YouTube, streaming a total of 12 concerts as we grew our audience by 570% compared to the previous measured quarter. 1/3 of our subscribers are now under 30 years old. Our #StreamingSundays film of Handel’s Messiah with VOCES8 has reached over 130,000 viewers since its YouTube premiere in early summer, with 4x more exposure than our next most popular video over that time. Our AAMplify education and outreach programme was curtailed this year, however we still reached 143 schoolchildren, 23 teachers and 38 music students.

Our 2019-20 season was an extraordinary one for the Academy of Ancient Music, with ravishing praise from critics, audiences and guest artists alike, packed auditoriums and concert halls, and millions of listeners joining us from around the world online to share in our artistic activity. Whilst our activity sadly was brought to an untimely end, the generous support and encouragement from our audiences helped carry us through these difficult times. You have helped make all of this possible, and we sincerely thank you for your generous support. 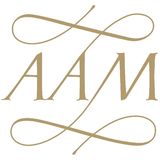