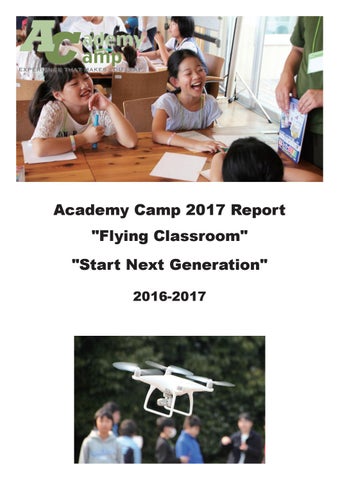 Introduction Academy Camp started as a series of camps for children in Fukushima, the Japanese prefecture most affected by the year 2011 Great East Japan Earthquake/Tsunami and TEPCO Fukushima Daiichi Nuclear Disaster. The initial passion behind the creation of the camp still lives in our heart. But today, we are also worried about the situations surrounding children&#39;s learning in Japan, because technological and social situations are beginning to change drastically. â&amp;#x20AC;&amp;#x153;No one has ever changed the world by doing what the world has told them to do.â&amp;#x20AC;? This is a statement by a teen-age entrepreneur, Mr. Eddy Zhong. In many areas and fields, we see lots of emerging young talents like him. Plus, the world itself as we know today is in a rapid process of changing, through new technology such as artificial intelligence and robots. This is the beginning of the next generations. Children living today are part of such new generations, and they will be the ones in charge of the future of human race. What we can do, we think, is to support those children to go forward into the unknown future where they can lead us through the rapid changes, and make sure that the next generations will never repeat the tragedy we have regrettably allowed to happen to them. That is the reason why we continue to hold this series of camps with lots of fun and learning. - Who&#39;s Academy Camp? We are a group of university faculty members, camp directors, members of non-profits supporting children, and student and other volunteers who support our activities. We have been continuing to hold camps for children, especially for those in Fukushima to provide them with extreme playing and learning opportunities. https://academy-camp.org - Activities in FY2017 In 2017, we held three camps, one in March and two in August. The March camp was about science of flying objects, and called Academy Camp 2017 Spring &quot;Flying Classroom&quot;. The August camps were about digital fabrication and deep learning, and called Academy Camp 2017 Summer &quot;Start Next Generation&quot;. All camps were located in Shonan Fujisawa Campus, Keio University, in Fujisawa City, Kanagawa Prefecture. This document reports what we did in these three camps. Please enjoy the records of wonderful days for children supported by you and young force of students.

Academy Camp 2017 Spring &quot;Flying Classroom&quot; Has anyone told you that &quot;nobody really knows why airplanes can fly&quot;? It is a kind of urban legends. But according to NASA, in fact, in many cases, explanations of the theory of flying are inaccurate. Today, we have a correct scientific model to which the reality seems to conform. Therefore, we have no trouble designing and manufacturing airplanes in practice. However, the scientists would love to continue to refine the model to know the theory of flying more deeply. &quot;Science&quot; is to challenge where there is no complete answer yet. In this camp, in order for children to do such science, we have made many challenges through controllable flying objects, from paper planes to drones. Camp Chairs - Kenji Saito - Representative Director, Academy Camp - Senior Researcher, Keio Research Institute at SFC, Keio University - Masaki Minami - Director, Academy Camp - Project Assistant Professor, Keio University

26 members and sub-leaders (participants) gathered at Fukushima, Koriyama and ShinShirakawa stations travelled with leaders (student volunteers), and arrived at SFC (Shonan Fujisawa Campus), Keio University, in the afternoon. After the orientation and team building session that involved designing paper planes to satisfy some conditions, we learnt the theory of lift considered to be correct utilizing materials by NASA, referring to some common misunderstandings. After that, we tried to verify the correct current theory using paper planes.

On the second day, Masaki Minami (Keio University), a drone specialist and a director of Academy Camp, supervised children learning how to fly drones. First, they tried to make a small drone stay steady in the air, and those who passed this trial could then fly a larger drone. They made plans for shooting video from drones, and in the end, we had four interesting videos using drones. Later, we announced that we would hold a contest for paper objects designed specifically to either 1) fall staright, 2) stay in the air for a long time, or 3) go far in the air, and participants started working on their projects in groups.

We tested the outcomes of their projects by dropping them from the second floor of a university building, and then made our challenges from the third floor. It was amazing to see how much children can achieve in such a short period. We had lunch and the closing session, and members went back home safely to conclude the 2-night, 3-day camp.

Academy Camp 2017 Summer &quot;Start Next Generation&quot; We have already mentioned in the introduction section of this report that children living today are part of new generations, and they will be the ones in charge of the future of human race. In this camp, we hoped for those next-generation participants to make challenges toward living through the future, by experiencing new common-sense technology such as digital fabrication and artificial intelligence, and by communicating with the researchers and students who create and use such technology. Camp Chairs - Kenji Saito - Representative Director, Academy Camp - Senior Researcher, Keio Research Institute at SFC / Lecturer, Faculty of Environment and Information Studies, Keio University - Masaki Minami - Director, Academy Camp - Project Assistant Professor, Keio University

We started with improvising; our friends 6-dim+, a group of actors specialized in improvisation, led the orientation of the camp. What participants experienced there was to &quot;decide&quot;. There is no script, and they needed to go one step forward towards unknown future, thinking what others would want to do. That is exactly like the situation where those nextgeneration people have been put in reality. 6-dim+ also gave the children a chance to participate in their live performance. Thanks to them, the first day ended with much laughter and lots of smiles.

On the second day, we went to FabCafe Tokyo at Shibuya to experience 3D scanning and printing, laser-cutting and making adhesive tapes with children&#39;s original designs. One of the lecturers, Ms. Sugihara from Happy Printers (Harajuku), told us that fab is to make you ideas take form. Yes, let&#39;s make children&#39;s ideas take form, and let them make anything they want, where what they want really depends on what kind of society they want to make for the future.

On the 3rd day, we did &quot;digital orienteering&quot; as an excursion in Enoshima-Kamakura area, in which they had to take pictures with the same compositions at the same places as the photos they were shown before they started the orienteering, without being told where these photos were shot. The children did a great job exploring the neighborhood of Fujisawa City. In Gokurakuji Sation, one of spots a photo was taken, they encountered people who sold popsicles, and took a photo together. Their excursion seemed to have been full of such encounters.

On the final day, they all considered what they want to become when they will be age 28. Age 28 was how old HIKAKIN, a Japanese youtuber, was as of when this camp was held. He would not have dreamed of his being a youtuber when he was a child. Therefore, nobody would have a correct answer. Yet, the next-generation participants would go a step forward towards their unknown future.

Again, inspired by the statement &quot;No one has ever changed the world by doing what the world has told them to do.&quot; by a teen entrepreneur, we tried to put across the message &quot;DO NOT OBEY&quot; through the camp, because AI and robots would do much better job doing what they are told to do when the participants of this camp grow up. In this camp, too, improvisation artists 6-dim+ led the orientation. Their message seemed to urge children to make decisions towards unknown future, which, for the time being, is expected that only human would remain able to do.

Again, in the &quot;digital orienteering&quot; excursion in Enoshima-Kamakura area, they had to take pictures with the same compositions at the same places as the photos they were shown before they started the orienteering, without being told where these photos were shot. The photos were of &quot;Godzilla&#39;s landing&quot;, &quot;Gokurakuji Station&quot; and &quot;Kamen Rider ExAid&quot;. For Gokurakuji, the photo was taken in 1986, and they had to compare it with today&#39;s technology and policy. The participants actually made an interview at the station, which was beyond our expectation. They did really great with other photos, too.

On the third day, students from Future University Hakodate visited us to let children experience game design through making characters based on someone they knew. Then Dr. Doi, a researcher from Preferred Networks, Inc. came to let children create a neural network that can only distinguish between dogs and cats (so whatever image is shown to it, it can only tell whether it looks like a dog or a cat), and also let them think about &quot;The Trolley Problem&quot; that led them to some deep thinking of their senses of ethics and artificial intelligences. That night, after reviewing their views of themselves when they will become age 28 (which they wrote down on the first day), we did a treasure hunt at the university campus.

On the final day, the children and the university-student staff all considered what they want to be when they will become age 28. unknown future must lie in front of the children. After the two camps. we have received an overwhelming number of messages from parents thanking for the camps, and we sense that many parents are now worried and anxious about the unknown future of their children.

Afterword Looking back Academy Camp 2017 Kenji Saito Representative Director, Academy Camp With all your support and hard work by our volunteer friends including students of colleges and universities, we could safely conduct three camps during this fiscal year, and they have been, overall, positively recognized. We sing a lot during camps, and instead of &quot;Gan-Gan&quot;, our &quot;anthem&quot;, we challenged to sing the theme song of TV animation &quot;Clarence&quot; in English throughout this year&#39;s summer camp. Let me quote the whole lyrics here: &quot;I don&#39;t care what you say! / Gonna do what I want all day! / &#39;Cause I&#39;m king of the world!&quot; I tried to put forward the message &quot;DO NOT OBEY&quot; at the closing of the summer camps. I also said something like &quot;if you ever have something you really want to do, just grit your teeth and go forward.&quot; They would never need to blindly follow rules. Artificial intelligence and robots would do a much better job in following rules. In a sense, human values may lie where you do not follow rules. Like said, &quot;no one has ever changed the world by doing what the world has told them to do.&quot; I would like to thank everyone who supported Academy Camp during this fiscal year. Thank you for all you have done and all you will do for the children in Fukushima and Academy Camp.

We have sent out our December gifts to some of participants of this summer camp somehow it took us so long to produce 3D figures of them from the data they 3D-scanned by themselves. By the way, don&#39;t these figures look like a reunion of the camp?

* After camps, we receive overwhelming messages of gratitude from parents. After the &quot;Flying Classroom&quot;, for example, one parent told us that their boy wanted to learn more about drones, and began his research on the web. Another parent told us that their boy tried to explain her enthusiastically the correct theory of lift. We are glad that our camp seems to have worked as a good introduction to stimulate the children&#39;s curiosity.

- On Donation Academy Camp is funded and supported by participation fees from participants and staff, contributions from lecturers, grants, and your precious donations. We really appreciate your support. To donate : GlobalGiving (US and UK) - https://www.globalgiving.org/projects/academy-camp/ 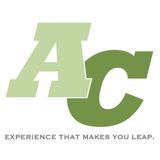