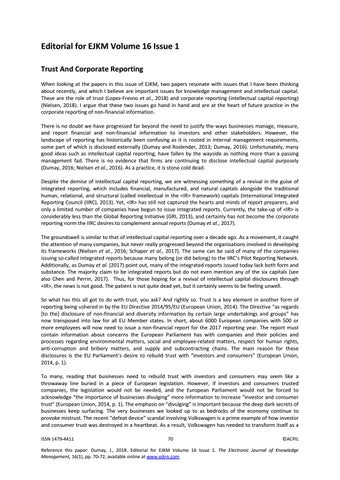 Editorial for EJKM Volume 16 Issue 1 Trust And Corporate Reporting When looking at the papers in this issue of EJKM, two papers resonate with issues that I have been thinking about recently, and which I believe are important issues for knowledge management and intellectual capital. These are the role of trust (Lopez-Fresno et al., 2018) and corporate reporting (intellectual capital reporting) (Nielsen, 2018). I argue that these two issues go hand in hand and are at the heart of future practice in the corporate reporting of non-financial information. There is no doubt we have progressed far beyond the need to justify the ways businesses manage, measure, and report financial and non-financial information to investors and other stakeholders. However, the landscape of reporting has historically been confusing as it is rooted in internal management requirements, some part of which is disclosed externally (Dumay and Roslender, 2013; Dumay, 2016). Unfortunately, many good ideas such as intellectual capital reporting, have fallen by the wayside as nothing more than a passing management fad. There is no evidence that firms are continuing to disclose intellectual capital purposely (Dumay, 2016; Nielsen et al., 2016). As a practice, it is stone cold dead. Despite the demise of intellectual capital reporting, we are witnessing something of a revival in the guise of integrated reporting, which includes financial, manufactured, and natural capitals alongside the traditional human, relational, and structural (called intellectual in the <IR> framework) capitals (International Integrated Reporting Council (IIRC), 2013). Yet, <IR> has still not captured the hearts and minds of report preparers, and only a limited number of companies have begun to issue integrated reports. Currently, the take-up of <IR> is considerably less than the Global Reporting Initiative (GRI, 2013), and certainly has not become the corporate reporting norm the IIRC desires to complement annual reports (Dumay et al., 2017). The groundswell is similar to that of intellectual capital reporting over a decade ago. As a movement, it caught the attention of many companies, but never really progressed beyond the organisations involved in developing its frameworks (Nielsen et al., 2016; Schaper et al., 2017). The same can be said of many of the companies issuing so-called integrated reports because many belong (or did belong) to the IIRC’s Pilot Reporting Network. Additionally, as Dumay et al. (2017) point out, many of the integrated reports issued today lack both form and substance. The majority claim to be integrated reports but do not even mention any of the six capitals (see also Chen and Perrin, 2017). Thus, for those hoping for a revival of intellectual capital disclosures through <IR>, the news is not good. The patient is not quite dead yet, but it certainly seems to be feeling unwell. So what has this all got to do with trust, you ask? And rightly so. Trust is a key element in another form of reporting being ushered in by the EU Directive 2014/95/EU (European Union, 2014). The Directive “as regards [to the] disclosure of non-financial and diversity information by certain large undertakings and groups” has now transposed into law for all EU Member states. In short, about 6000 European companies with 500 or more employees will now need to issue a non-financial report for the 2017 reporting year. The report must contain information about concerns the European Parliament has with companies and their policies and processes regarding environmental matters, social and employee-related matters, respect for human rights, anti-corruption and bribery matters, and supply and subcontracting chains. The main reason for these disclosures is the EU Parliament’s desire to rebuild trust with “investors and consumers” (European Union, 2014, p. 1). To many, reading that businesses need to rebuild trust with investors and consumers may seem like a throwaway line buried in a piece of European legislation. However, if investors and consumers trusted companies, the legislation would not be needed, and the European Parliament would not be forced to acknowledge “the importance of businesses divulging” more information to increase “investor and consumer trust” (European Union, 2014, p. 1). The emphasis on “divulging” is important because the deep dark secrets of businesses keep surfacing. The very businesses we looked up to as bedrocks of the economy continue to provoke mistrust. The recent “defeat device” scandal involving Volkswagen is a prime example of how investor and consumer trust was destroyed in a heartbeat. As a result, Volkswagen has needed to transform itself as a ISSN 1479-4411

company to regain that trust. The scandal cost CEO Martin Winterkom his job, and in the days after the scandal broke, shares in Volkswagen dropped from US$160 to a little over US$110, wiping out billions in shareholder value. Volkswagen also faced costs for recalling all vehicles and billions in fines (Snyder & Jones, 2015). In 2017 so far, VW has reached settlements and paid fines of over US$22 billion in the US with more still to come. The penalties Europe will impose are still looming (Ewing & Boudette, 2017). In an attempt to recover from the scandal with a move away from diesel towards battery-powered vehicles, VW announced in November 2016 that it would shed over 30,000 jobs, including 23,000 in Germany. (McHugh, 2016). Thus, investors, consumers, employees, their families, and anyone closely associated with Volkswagen has suffered. With scandals like Volkswagen, it is no wonder that trust in companies to do the right thing is suffering. But how real is this trust deficit? According to the latest Edelman trust-barometer report, people in Europe are generally distrustful of the four pillars of society – government, the media, non-government organisations, and of course, business.i According to the Edelman report, trust is scored on a 1 to 100 scale with 100 as the highest level of trust. In the survey, all European countries had scores below 50, except the Netherlands (54), which had a neutral score that closely borders on the realm of distrust. Countries like Spain (47), Italy (43), Germany (41), France (40), Poland (39), the UK (39), and Ireland (38) have a populous who do not trust the institutions they rely on as foundations of society and the economy. However, with trust so low, how can investors and consumers have trust in companies who continue to reel from one scandal after another? The EU Directive is a demonstrable example of how business, investors, consumers, and the EU Parliament is trying to rebuild the last shreds of trust in the establishment. However, the EU Directive does not endorse any particular framework for divulging more information, leaving it up to individual companies to choose their preferred methods of disclosure (Frank Bold, 2017). In the rush to comply with the Directive, frameworks such as integrated reporting and the GRI seem the likely candidates for a revival in divulging non-financial information through reporting (Dumay et al., 2017). In that race, the GRI appears to be the prime candidate since it has already published guidance on how to use the GRI to comply with the EU Directive (GRI and Global Sustainability Standards Board, 2017); such detailed guidance is not available for <IR>. For researchers in knowledge management and intellectual capital, this presents an opportunity to investigate the systems and processes companies in the EU will use or need to change to comply with the Directive. Will companies simply make slight changes to their output to comply, considering that most large companies already use the GRI? Will it just be “business as usual” as has happened in other jurisdictions when a new reporting requirement becomes mandated (Dumay and Hossain, Forthcoming)? I hope that EJKM readers will explore these changes and contribute to the needed debates in academia, practice, and society to try to rebuild trust in the very institutions that should be bedrocks in our lives.