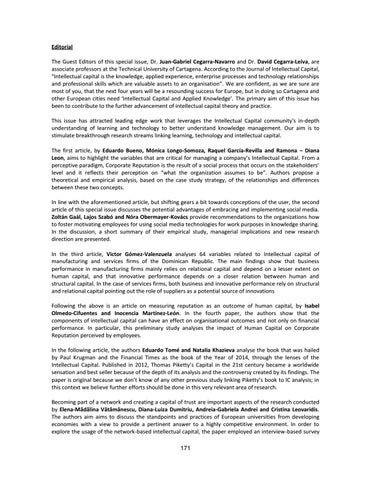 Editorial The Guest Editors of this special issue, Dr. Juan-Gabriel Cegarra-Navarro and Dr. David Cegarra-Leiva, are associate professors at the Technical University of Cartagena. According to the Journal of Intellectual Capital, "Intellectual capital is the knowledge, applied experience, enterprise processes and technology relationships and professional skills which are valuable assets to an organisation”. We are confident, as we are sure are most of you, that the next four years will be a resounding success for Europe, but in doing so Cartagena and other European cities need ‘Intellectual Capital and Applied Knowledge’. The primary aim of this issue has been to contribute to the further advancement of intellectual capital theory and practice. This issue has attracted leading edge work that leverages the Intellectual Capital community's in-depth understanding of learning and technology to better understand knowledge management. Our aim is to stimulate breakthrough research streams linking learning, technology and intellectual capital. The first article, by Eduardo Bueno, Mónica Longo-Somoza, Raquel García-Revilla and Ramona – Diana Leon, aims to highlight the variables that are critical for managing a company’s Intellectual Capital. From a perceptive paradigm, Corporate Reputation is the result of a social process that occurs on the stakeholders’ level and it reflects their perception on “what the organization assumes to be”. Authors propose a theoretical and empirical analysis, based on the case study strategy, of the relationships and differences between these two concepts. In line with the aforementioned article, but shifting gears a bit towards conceptions of the user, the second article of this special issue discusses the potential advantages of embracing and implementing social media. Zoltán Gaál, Lajos Szabó and Nóra Obermayer-Kovács provide recommendations to the organizations how to foster motivating employees for using social media technologies for work purposes in knowledge sharing. In the discussion, a short summary of their empirical study, managerial implications and new research direction are presented. In the third article, Victor Gómez‐Valenzuela analyses 64 variables related to Intellectual capital of manufacturing and services firms of the Dominican Republic. The main findings show that business performance in manufacturing firms mainly relies on relational capital and depend on a lesser extent on human capital, and that innovative performance depends on a closer relation between human and structural capital. In the case of services firms, both business and innovative performance rely on structural and relational capital pointing out the role of suppliers as a potential source of innovations Following the above is an article on measuring reputation as an outcome of human capital, by Isabel Olmedo-Cifuentes and Inocencia Martínez-León. In the fourth paper, the authors show that the components of intellectual capital can have an effect on organisational outcomes and not only on financial performance. In particular, this preliminary study analyses the impact of Human Capital on Corporate Reputation perceived by employees. In the following article, the authors Eduardo Tomé and Natalia Khazieva analyse the book that was hailed by Paul Krugman and the Financial Times as the book of the Year of 2014, through the lenses of the Intellectual Capital. Published in 2012, Thomas Piketty’s Capital in the 21st century became a worldwide sensation and best seller because of the depth of its analysis and the controversy created by its findings. The paper is original because we don’t know of any other previous study linking Piketty’s book to IC analysis; in this context we believe further efforts should be done in this very relevant area of research. Becoming part of a network and creating a capital of trust are important aspects of the research conducted by Elena-Mădălina Vătămănescu, Diana-Luiza Dumitriu, Andreia-Gabriela Andrei and Cristina Leovaridis. The authors aim aims to discuss the standpoints and practices of European universities from developing economies with a view to provide a pertinent answer to a highly competitive environment. In order to explore the usage of the network-based intellectual capital, the paper employed an interview-based survey 171

with 27 professors. As the findings showed, although acknowledged as a paramount competitive advantage, the network-based intellectual capital is yet to be properly capitalized. The issue ends with the article of Max Evans, Anthony Wensley and Ilja Frissen. They extend the findings above by examining the direct, relative, and collective effects of social and cognitive factors on organizational knowledge sharing factors. The authors present the results of a secondary data analysis, which examines whether perceived trustworthiness in co-workers acts as a mediating variable between the previously mentioned social/cognitive variables and knowledge sharing factors. Their results showed coworker trust as having the strongest statistical influence on each factor used to operationalize organizational knowledge sharing: willingness to share knowledge, willingness to use knowledge, and perceived receipt of useful information/knowledge. Dr. Juan-Gabriel Cegarra-Navarro and Dr. David Cegarra-Leiva Guest Editors