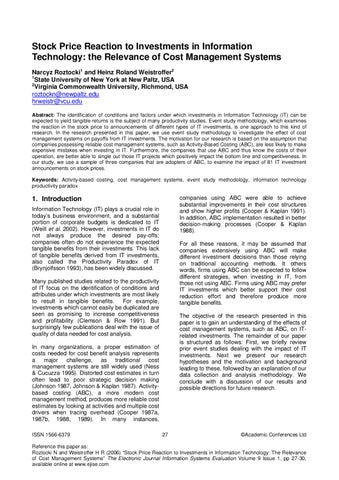 Stock Price Reaction to Investments in Information Technology: the Relevance of Cost Management Systems Narcyz Roztocki1 and Heinz Roland Weistroffer2 1 State University of New York at New Paltz, USA 2 Virginia Commonwealth University, Richmond, USA roztockn@newpaltz.edu hrweistr@vcu.edu Abstract: The identification of conditions and factors under which investments in Information Technology (IT) can be expected to yield tangible returns is the subject of many productivity studies. Event study methodology, which examines the reaction in the stock price to announcements of different types of IT investments, is one approach to this kind of research. In the research presented in this paper, we use event study methodology to investigate the effect of cost management systems on payoffs from IT investments. The motivation for our research is based on the assumption that companies possessing reliable cost management systems, such as Activity-Based Costing (ABC), are less likely to make expensive mistakes when investing in IT. Furthermore, the companies that use ABC and thus know the costs of their operation, are better able to single out those IT projects which positively impact the bottom line and competitiveness. In our study, we use a sample of three companies that are adopters of ABC, to examine the impact of 81 IT investment announcements on stock prices. Keywords: Activity-based costing, cost management systems, event study methodology, information technology productivity paradox

1. Introduction Information Technology (IT) plays a crucial role in today’s business environment, and a substantial portion of corporate budgets is dedicated to IT (Weill et al. 2002). However, investments in IT do not always produce the desired pay-offs; companies often do not experience the expected tangible benefits from their investments. This lack of tangible benefits derived from IT investments, also called the Productivity Paradox of IT (Brynjolfsson 1993), has been widely discussed.

For all these reasons, it may be assumed that companies extensively using ABC will make different investment decisions than those relying on traditional accounting methods. It others words, firms using ABC can be expected to follow different strategies, when investing in IT, from those not using ABC. Firms using ABC may prefer IT investments which better support their cost reduction effort and therefore produce more tangible benefits.

Many published studies related to the productivity of IT focus on the identification of conditions and attributes under which investments are most likely to result in tangible benefits. For example, investments which cannot easily be duplicated are seen as promising to increase competitiveness and profitability (Clemson & Row 1991). But surprisingly few publications deal with the issue of quality of data needed for cost analysis.

The objective of the research presented in this paper is to gain an understanding of the effects of cost management systems, such as ABC, on ITrelated investments. The remainder of our paper is structured as follows: First, we briefly review prior event studies dealing with the impact of IT investments. Next we present our research hypotheses and the motivation and background leading to these, followed by an explanation of our data collection and analysis methodology. We conclude with a discussion of our results and possible directions for future research.

2. Previous event studies of IT investment announcements A fundamental assumption in the field of finance is that in an efficient market, stock prices fully reflect all available information. Thus, when new, unexpected investment information is released, the stock prices adjust accordingly. If the content and implication of the released information are perceived as adding business value to the shareholders, the stock prices are expected to increase (Fama 1970, 1991, Fama et al. 1969). Recently, several studies of stock price reaction to IT investment announcements have been conducted, to investigate the fundamental question: “does IT matter?” (Carr 2003). Dos Santos et al. (1993) examined stock price reaction in the context of industry and innovation. With respect to industry, the expectation was that IT would have a larger impact on financial firms than manufacturing firms, due to the information intensity of the financial industry. However their results could not confirm this. With respect to innovation, the assumption is that the introduction of new technology or technology enabled products will result in a competitive edge until the technology becomes routine within the industry. The results of the study did show positive excessive stock price returns for innovative IT investments. Im et al. (2001) examined stock price reaction in the context of industry, firm size and time period. They found no price reaction for larger firms, and positive price reactions for smaller firms. They also found that prices reacted more positively to newer announcements of IT investments than to older announcements. Chatterjee et al. (2002) investigated whether investments that target IT infrastructure rather than applications induce positive price reactions, which seemed to be confirmed by their analysis. Dehning et al. (2003) found positive, excessive returns to announcements of IT investments by firms making transformative investments.

4. Methodology 4.1 Data collection We started our selection of firms with a published list of early adopters of ABC (Gordon & Silvester 1999). In order to assure that these companies are still using ABC, we searched the Internet for press reports and other references about these companies and their usage of ABC. We then selected three companies where we can reliably assume that they still use ABC.

3. Hypotheses and motivation No previous event study has looked at the effect of cost management systems on excessive stock price reaction to IT investment announcements. Whereas traditional cost accounting systems lump costs into a few overhead pools or categories, with Activity-Based Costing (ABC), these categories are divided into scores of activities, and costs are allocated to each of these activities. While this approach requires more data collection, it also results in more accurate cost estimation. Our argument is that organizations possessing reliable cost managements systems, such as ABC, are less likely to make expensive mistakes

Next, for this selected group of ABC users we searched Lexis-Nexis database for announcements about IT-related investments. Each announcement was examined for its relevance and coded as “automate or “transform”, using the coding rule developed by Dehning et al. (2003). Six announcements did not fit into either category. Table 1 shows the number of announcements for each of the three companies,

and the number that were considered to refer to “automate” and to “transform” investments. Table 1: Number of Announcements Total Event s

6. Conclusions and discussion In this study, in order to examine the possible effect of cost management systems on investments in IT, we investigated the change in stock price of three companies known as early adopters of ABC. Analysis of our data suggests that even for companies using ABC, overall, investors do not associate IT investments with a substantial change in future cash flows, which is manifested in a lack of abnormal returns in the full sample. In other words, our findings indicate that the mere adoption of ABC in a company will not necessarily convince the investors that most investments in IT will generate business value.

However, our results also suggest that for companies using ABC, investors do associate automate IT investments with higher future cash flows, which can be seen in the positive abnormal returns for this kind of IT investments. In contrast, investors seem to expect transform IT

issue and much more research in this area is needed. The results of our study also provide further evidence that event study methodology, a common research tool in corporate finance and strategic management, is also very promising in the field of IT.

Finally, as in earlier event studies, we examined the stock market reaction to announcements related to IT investments and not to the outcomes of the projects which were announced. It is well known and documented that some investments will be realized and some are intended but not realized (Minzberg 1978). A future study could examine this issue.

7. Limitations and directions for future research One limitation related to our methodology is the lack of accounting for confounding news, which are not related to the IT investments but may have impact on stock prices. In spite of our efforts to identify and to exclude possibly contaminated announcements, it is always possible that such news did exist. In addition, we did not extensively study the timing of the announcements. It is, for example, possible that some of the announcements would receive a different investors’ reaction if a major competitor also just implemented a similar IT system.

Acknowledgements An earlier version of this paper was presented at the 11th European Conference on Information Technology Evaluation (ECITE 2004), Amsterdam, Netherlands, November 11-12, 2004. We are very grateful to the participants of this conference who provided helpful comments.

Stock Price Reaction to Investments in Information Technology: the Relevance of Cost Management...

The identification of conditions and factors under which investments in Information Technology (IT) can be expected to yield tangible return...

Stock Price Reaction to Investments in Information Technology: the Relevance of Cost Management...

The identification of conditions and factors under which investments in Information Technology (IT) can be expected to yield tangible return...