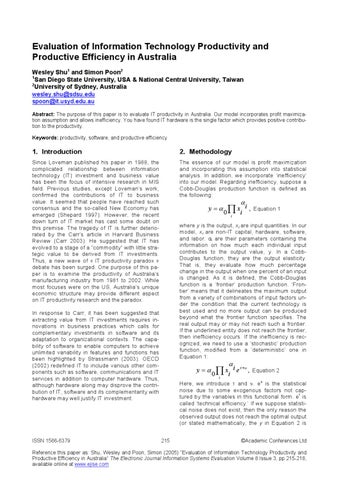 Evaluation of Information Technology Productivity and Productive Efficiency in Australia Wesley Shu1 and Simon Poon2 1 San Diego State University, USA & National Central University, Taiwan 2 University of Sydney, Australia wesley.shu@sdsu.edu spoon@it.usyd.edu.au Abstract: The purpose of this paper is to evaluate IT productivity in Australia. Our model incorporates profit maximization assumption and allows inefficiency. You have found IT hardware is the single factor which provides positive contribution to the productivity. Keywords: productivity, software, and productive efficiency

Since Loveman published his paper in 1988, the complicated relationship between information technology (IT) investment and business value has been the focus of intensive research in MIS field. Previous studies, except Loveman’s work, confirmed the contributions of IT to business value. It seemed that people have reached such consensus and the so-called New Economy has emerged (Shepard 1997). However, the recent down turn of IT market has cast some doubt on this premise. The tragedy of IT is further deteriorated by the Carr’s article in Harvard Business Review (Carr 2003). He suggested that IT has evolved to a stage of a “commodity” with little strategic value to be derived from IT investments. Thus, a new wave of « IT productivity paradox » debate has been surged. One purpose of this paper is to examine the productivity of Australia’s manufacturing industry from 1981 to 2002. While most focuses were on the US, Australia’s unique economic structure may provide different aspect on IT productivity research and the paradox.

The essence of our model is profit maximization and incorporating this assumption into statistical analysis. In addition, we incorporate ‘inefficiency’ into our model. Regarding inefficiency, suppose a Cobb-Douglas production function is defined as the following:

where y is the output, xi are input quantities. In our model, xi are non-IT capital, hardware, software, and labor. αi are their parameters containing the information on how much each individual input contributes to the output value, y. In a CobbDouglas function, they are the output elasticity. That is, they evaluate how much percentage change in the output when one percent of an input is changed. As it is defined, the Cobb-Douglas function is a ‘frontier’ production function. ‘Frontier’ means that it delineates the maximum output from a variety of combinations of input factors under the condition that the current technology is best used and no more output can be produced beyond what the frontier function specifies. The real output may or may not reach such a frontier. If the underlined entity does not reach the frontier, then inefficiency occurs. If the inefficiency is recognized, we need to use a ’stochastic’ production function, modified from a ’deterministic’ one in Equation 1:

In response to Carr, it has been suggested that extracting value from IT investments requires innovations in business practices which calls for complementary investments in software and its adaptation to organizational contexts. The capability of software to enable computers to achieve unlimited variability in features and functions has been highlighted by Strassmann (2003). OECD (2002) redefined IT to include various other components such as software, communications and IT services in addition to computer hardware. Thus, although hardware along may disprove the contribution of IT, software and its complementarity with hardware may well justify IT investment.

Here, we introduce τ and υ. eυ is the statistical noise due to some exogenous factors not captured by the variables in this functional form. eτ is called ‘technical efficiency.’ If we suppose statistical noise does not exist, then the only reason the observed output does not reach the optimal output (or stated mathematically, the y in Equation 2 is 215

model, prices are exogenous variables in a competitive market and the quantities of the input and the output endogenous. That is, firms cannot change prices but they can adjust their input quantities based on the price changes to maximize their profits.

less than the y in Equation 1) is because of the technical efficiency measured in eτ. One can see thatυis iid N(0, συ), and eτ is bounded between 0 and 1. When eτ is 1, no technical inefficiency occurs. When it is zero, although impossible, the production is so inefficient that the input does not produce anything.

If the production function is deterministic, a simple FIML (Full Information Maximum Likelihood) method can be used. However, we have recognized inefficiency and FIML assumes no inefficiency exists. Thus, a model by Kumbharkar (1989) will be used. Following his model, we take Lagrangian of Equation 3 with respect to all input and output quantities since they are endogenous variables whom firms will adjust to maximize their profits, and leave the inefficiency in the forms of error terms. Thus, we will have the following simultaneous equations:

Another feature of our model is profit maximization. This has two implications. First, we need to incorporate such a business behavior into our model. Second, the input quantities are no longer ‘independent’ since it can be changed by firms to maximize their profits. Equation 3 is a profit maximization model:

where p is the price of y, wi are prices for capital xi. τ andυ are defined as in Equation 2. In this

In this model, inefficiency is divided into three categories: technical ( τ ), allocative ( u k , ul , and

input allocation result in the difference between the actual output and the optimal output, i.e., the output level delineated by the production frontier.

We assembled annual time-series data from the National Accounts Division of the Australian Bureau of Statistics (ABS) for the period over 22 years (1981-2002) for 12 industries covering the full spectrum of the Australian market sector. Industry estimates of value-added and data on productive capital stock, both expressed in constant 2000 dollars at 1-digit Australian and New Zealand Standard Industrial Classification (ANZSIC) level. Traditionally, productivity analyses have proceeded on the assumption that capital assets deliver economic services in proportion to the size of the installed capital stock (i.e. net of depreciation). Because different types of capital deteriorate at different rates unrelated to wealth depreciation, ABS provided us the volume of capital adjusted for efficiency losses according to the relevant agoefficiency, defined as the productive capital stock of each asset over time. Table 1 shows that capi-

Figure 2 Growth trend in log scale IT productive capital stock between 1981 and 2002 Figure 1 and Figure 2 show that the productive IT capital (IT hardware and IT software) grew rapidly in all industries in the market sector in the past 2 decades. However, some industries become more intensive IT users than others. Table 3: Share of IT productive stock in manufacturing industry

Over the 22 years covered by our data, the diffusion of IT into the fabric of Australian business

The definitions we use in this study for IT capital and non-IT capital is similar to Australian Productivity Commission’s research Report (Parham et al. 2001) in which IT capital consists of only two classes: (1) Computers under the category of “Other machinery and equipment”, and (2) Software (including pre-packaged, own-account, and customized). Because communication equipment is not separated from other machinery, it is included under the non-IT capital measure. Summary statistics of the variables are provided in Table 2 Data description of Australian national accounts at 1-digit ANZSIC level Variables Valueadded (q)

input. A simple observation can reveal that the degree of price drop may correlate the output elasticity. Compared to IT hardware, software does not show positive contribution, and it’s price level in 2002 is 18.52% of that in 1981. Non-IT capital and labor also does not show positive result and their price levels are 2.59 and 2.74 times respectively during the same period. Using Australian data and different methodology, this paper, echoes the previous research that IT shows positive contribution to productivity. Table 4: Parameter Estimation

4. Findings and conclusion Our findings reveal some interesting results. Table 4 shows the parameter estimation from our model. They represented the output elasticity as stated above. One obvious finding is the sign of the parameters. We can see the only input with statistically significant contribution to output is computer hardware. Although this result is surprising, it is within interpretation once we understand the Australia’s economic trend. As other countries, the IT prices dropped significantly during the years of 1981 to 2002. The IT average price, or the price deflator in 2002 is only 6.66% of that in 1981. Although the nominal IT expenditure already increased almost 200 times from 1981 to 2002, the real value, deflated by the price index, incremented more than 3,000 times. This has two implications. First, firms have realized the importance of IT as an input. Second, the significant price drop resulted in tremendous increase of IT

Evaluation of Information Technology Productivity and Productive Efficiency in Australia

The purpose of this paper is to evaluate IT productivity in Australia. Our model incorporates profit maximiza-tion assumption and allows ine...

Evaluation of Information Technology Productivity and Productive Efficiency in Australia

The purpose of this paper is to evaluate IT productivity in Australia. Our model incorporates profit maximiza-tion assumption and allows ine...