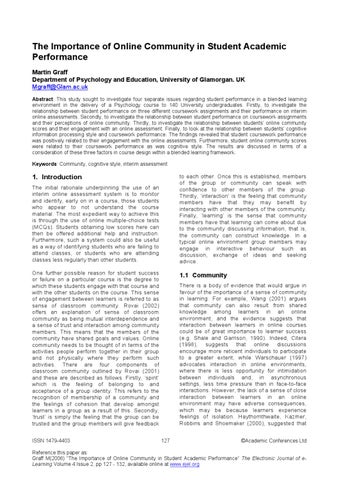 1. Introduction The initial rationale underpinning the use of an interim online assessment system is to monitor and identify, early on in a course, those students who appear to not understand the course material. The most expedient way to achieve this is through the use of online multiple-choice tests (MCQs). Students obtaining low scores here can then be offered additional help and instruction. Furthermore, such a system could also be useful as a way of identifying students who are failing to attend classes, or students who are attending classes less regularly than other students. One further possible reason for student success or failure on a particular course is the degree to which these students engage with that course and with the other students on the course. This sense of engagement between learners is referred to as sense of classroom community. Rovai (2002) offers an explanation of sense of classroom community as being mutual interdependence and a sense of trust and interaction among community members. This means that the members of the community have shared goals and values. Online community needs to be thought of in terms of the activities people perform together in their group and not physically where they perform such activities. There are four components of classroom community outlined by Rovai (2001) and these are described as follows. Firstly, ‘spirit’ which is the feeling of belonging to and acceptance of a group identity. This refers to the recognition of membership of a community and the feelings of cohesion that develop amongst learners in a group as a result of this. Secondly, ‘trust’ is simply the feeling that the group can be trusted and the group members will give feedback ISSN 1479-4403

1.1 Community There is a body of evidence that would argue in favour of the importance of a sense of community in learning. For example, Wang (2001) argues that community can also result from shared knowledge among learners in an online environment, and the evidence suggests that interaction between learners in online courses could be of great importance to learner success (e.g. Shale and Garrison, 1990). Indeed, Citera (1998), suggests that online discussions encourage more reticent individuals to participate to a greater extent, while Warschauer (1997) advocates interaction in online environments, where there is less opportunity for intimidation between individuals and, in asynchronous settings, less time pressure than in face-to-face interactions. However, the lack of a sense of close interaction between learners in an online environment may have adverse consequences, which may be because learners experience feelings of isolation. Haythornthwaite, Kazmer, Robbins and Shoemaker (2000), suggested that 127

the participants in their study who failed to make online connections with other learners in their group reported feeling isolated and more stressed than those who made more connections. It would seem therefore that a strong sense of community and interaction is also crucial in online learning environments.

2.2.2 Coursework assignments Three different types of assessment were utilised in this course. Theses were: 1. A short essay 800 words. 2. A critical evaluation of a psychology article. For this, students had to choose an article and write about the psychological implications of the article’s content from their knowledge of psychology. This was not meant to be an essay, but merely a commentary. 3. A long essay 1500 words.

2.3.2 Classroom community index (Rovai, 2002) The Classroom Community Index is a self-report instrument consisting of 40 items, requiring a response on a 5-point Likert-scale ranging from strongly agree to strongly disagree. Scores on the questionnaire range from 0 – 160, with low scores reflecting a weak sense of community and high scores reflecting a strong one. The questionnaire also features four subscales of spirit, trust, interaction and learning with 10 items measuring each and scores ranging from 0 to 40. Rovai (2002) reports a high degree of face validity of the instrument, in that the items appear to measure what is needed to assess community. Internal consistency estimates using Cronbach’s alpha as reported by Rovai (2001) reached .96 for the total scale, .90 for the spirit subscale, .84 for the trust subscale, .84 for the interaction subscale and .88 for the learning subscale.

2.3 Psychometric instruments 2.3.1 Cognitive styles index (Allinson and Hayes 1996) The Cognitive Styles Index (CSI) (Allinson and Hayes 1996) is a self-report test designed to measure the analyst-intuitive dimension of cognitive style. The term intuitive is used to describe an individual who makes judgements based on feelings and who adopts a global approach to processing information, whereas the term analytic describes an individual who makes judgements based on reason, and who focuses on specific detail when processing information. Analysts tend to be inward looking and self-reliant, whereas intuitives are more socially directed orientation and look more to others. The CSI contains 38 statements, to each of which a respondent must indicate a true/uncertain/false response. It has a theoretical maximum score of 76. Higher scores indicate a more analytical cognitive style and lower scores indicate a more intuitive style.

The psychometric properties of the CSI instrument are documented by Allinson and Hayes (1996). From a sample of 1000 participants, they report a mean score of 38.5. Furthermore, graphical inspection and a Kolmogorov-Smirnov ‘goodness of fit’ test suggest that the test scores are normally distributed. Test-retest reliability of the instrument is also sound (r = 0.90, p <0.001), and mean scores of 34.60 and 35.40 indicate no significant changes over time (t = 0.82, p > 0.05). Finally, internal consistency scores measured by Cronbach’s Alpha taken from seven independent samples range from .84 to .92. The construct validity of the CSI has also been reported by Allinson and Hayes (1996). They report statistically significant relationships between the CSI and scores on the Myers Briggs Type indicator. For example, the CSI correlated positively with the extroversion – introversion (r = 0.57, p < 0.001), dimension and correlated negatively with the sensing - intuitive (r = - 0.41, p ISSN 1479-4403

The relationship between community scores and MCQ engagement

The relationship between cognitive style and performance

group is essential for good performance. However, there would appear to be no relationship between classroom community scores and MCQ engagement. In line with studies, which show a relationship between cognitive style and academic performance, this study also illustrated such a relationship. Here analytics as defined by the Cognitive Styles Index performed best on assignment 3, with no difference in performance between learners of different cognitive styles in the other coursework elements. The consistent finding here is for a difference to be evident on assignment 3. As mentioned above, assignment 3 was a more substantial piece of work, and this may account for the difference observed here. A further possible interpretation is that differences in ability between students were beginning to become evident at the time they took the third assignment. However, it also possible that assignment 3 was an assignment, which differentiated between students on ability, and this, is something, which is worthy of further investigation.

4. Discussion This study sought to investigate several issues related to interim assessment and the results are discussed in the following. Firstly the results showed no relationship between performance on the coursework assignments and performance on the online MCQs. The MCQ categories were very narrow and this may account for the lack of any observable differences here. What is possibly more critical is the relationship between performance on the coursework assignments and engagement with the MCQ system. Here the results showed a difference in that students who attempted 4 or more of the six MCQ tests scored better on assignment 3 than those who attempted 3 or less MCQs. This would appear to suggest that students who perhaps engaged more with the course generally were likely to perform better in coursework. Why this is only true for coursework 3 is possibly because this coursework was a more substantial piece of work than the first two. This study also sought to look at the concept of classroom community, and the relationship between this and performance on coursework assignments. The results showed that students with a high spirit score on the community index performed better on coursework assignment 3. As described above, â&#x20AC;&#x2DC;spiritâ&#x20AC;&#x2122; is the feeling of belonging to and acceptance of a group identity. This refers to the recognition of membership of a community and the feelings of cohesion that develops amongst learners in a group as a result of this. It appears then that a feeling of belonging to a

5. Conclusion In conclusion, the general finding from this study showed several factors determined good performance on coursework assignments. These were engagement with the course in terms of the amount of online assessment attempted, classroom community, and cognitive style. It would therefore seem reasonable to consider these factors in the design of course material.

The Importance of Online Community in Student Academic Performance

This study sought to investigate four separate issues regarding student performance in a blended learning environment in the delivery of a P...

The Importance of Online Community in Student Academic Performance

This study sought to investigate four separate issues regarding student performance in a blended learning environment in the delivery of a P...