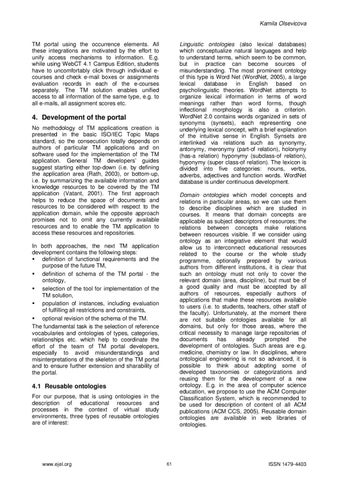 Linguistic ontologies (also lexical databases) which conceptualize natural languages and help to understand terms, which seem to be common, but in practice can become sources of misunderstanding. The most prominent ontology of this type is Word Net (WordNet, 2005), a large lexical database in English based on psycholinguistic theories. WordNet attempts to organize lexical information in terms of word meanings rather than word forms, though inflectional morphology is also a criterion. WordNet 2.0 contains words organized in sets of synonyms (synsets), each representing one underlying lexical concept, with a brief explanation of the intuitive sense in English. Synsets are interlinked via relations such as synonymy, antonymy, meronymy (part-of relation), holonymy (has-a relation) hyponymy (subclass-of relation), hyponymy (super class-of relation). The lexicon is divided into five categories: nouns, verbs, adverbs, adjectives and function words. WordNet database is under continuous development.

TM portal using the occurrence elements. All these integrations are motivated by the effort to unify access mechanisms to information. E.g. while using WebCT 4.1 Campus Edition, students have to uncomfortably click through individual ecourses and check e-mail boxes or assignments evaluation records in each of the e-courses separately. The TM solution enables unified access to all information of the same type, e.g. to all e-mails, all assignment scores etc.

Domain ontologies which model concepts and relations in particular areas, so we can use them to describe disciplines which are studied in courses. It means that domain concepts are applicable as subject descriptors of resources; the relations between concepts make relations between resources visible. If we consider using ontology as an integrative element that would allow us to interconnect educational resources related to the course or the whole study programme, optionally prepared by various authors from different institutions, it is clear that such an ontology must not only to cover the relevant domain (area, discipline), but must be of a good quality and must be accepted by all authors of resources, especially authors of applications that make these resources available to users (i.e. to students, teachers, other staff of the faculty). Unfortunately, at the moment there are not suitable ontologies available for all domains, but only for those areas, where the critical necessity to manage large repositories of documents has already prompted the development of ontologies. Such areas are e.g. medicine, chemistry or law. In disciplines, where ontological engineering is not so advanced, it is possible to think about adopting some of developed taxonomies or categorizations and reusing them for the development of a new ontology. E.g. in the area of computer science education, we propose to use the ACM Computer Classification System, which is recommended to be used for description of content of all ACM publications (ACM CCS, 2005). Reusable domain ontologies are available in web libraries of ontologies.

In both approaches, the next TM application development contains the following steps:  definition of functional requirements and the purpose of the future TM,  definition of schema of the TM portal - the ontology,  selection of the tool for implementation of the TM solution,  population of instances, including evaluation of fulfilling all restrictions and constraints,  optional revision of the schema of the TM. The fundamental task is the selection of reference vocabularies and ontologies of types, categories, relationships etc. which help to coordinate the effort of the team of TM portal developers, especially to avoid misunderstandings and misinterpretations of the skeleton of the TM portal and to ensure further extension and sharability of the portal.

Topic Maps, ISOIEC 13250 standard, are designed to facilitate the organization and navigation of large collections of information objects by...

Topic Maps, ISOIEC 13250 standard, are designed to facilitate the organization and navigation of large collections of information objects by...