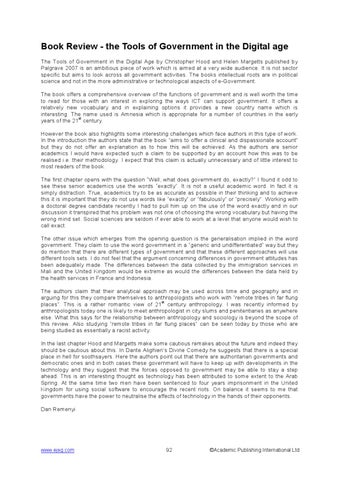 Book Review - the Tools of Government in the Digital age The Tools of Government in the Digital Age by Christopher Hood and Helen Margetts published by Palgrave 2007 is an ambitious piece of work which is aimed at a very wide audience. It is not sector specific but aims to look across all government activities. The books intellectual roots are in political science and not in the more administrative or technological aspects of e-Government. The book offers a comprehensive overview of the functions of government and is well worth the time to read for those with an interest in exploring the ways ICT can support government. It offers a relatively new vocabulary and in explaining options it provides a new country name which is interesting. The name used is Amnesia which is appropriate for a number of countries in the early st years of the 21 century. However the book also highlights some interesting challenges which face authors in this type of work. In the introduction the authors state that the book ”aims to offer a clinical and dispassionate account” but they do not offer an explanation as to how this will be achieved. As the authors are senior academics I would have expected such a claim to be supported by an account how this was to be realised i.e. their methodology. I expect that this claim is actually unnecessary and of little interest to most readers of the book. The first chapter opens with the question “Well, what does government do, exactly?” I found it odd to see these senior academics use the words “exactly”. It is not a useful academic word. In fact it is simply distraction. True, academics try to be as accurate as possible in their thinking and to achieve this it is important that they do not use words like “exactly” or “fabulously” or “precisely”. Working with a doctoral degree candidate recently I had to pull him up on the use of the word exactly and in our discussion it transpired that his problem was not one of choosing the wrong vocabulary but having the wrong mind set. Social sciences are seldom if ever able to work at a level that anyone would wish to call exact. The other issue which emerges from the opening question is the generalisation implied in the word government. They claim to use the word government in a “generic and undifferentiated” way but they do mention that there are different types of government and that these different approaches will use different tools sets. I do not feel that the argument concerning differences in government attitudes has been adequately made. The differences between the data collected by the immigration services in Mali and the United Kingdom would be extreme as would the differences between the data held by the health services in France and Indonesia. The authors claim that their analytical approach may be used across time and geography and in arguing for this they compare themselves to anthropologists who work with “remote tribes in far flung st places”. This is a rather romantic view of 21 century anthropology. I was recently informed by anthropologists today one is likely to meet anthropologist in city slums and penitentiaries as anywhere else. What this says for the relationship between anthropology and sociology is beyond the scope of this review. Also studying “remote tribes in far flung places” can be seen today by those who are being studied as essentially a racist activity. In the last chapter Hood and Margetts make some cautious remakes about the future and indeed they should be cautious about this. In Dante Alighieri’s Divine Comedy he suggests that there is a special place in hell for soothsayers. Here the authors point out that there are authoritarian governments and democratic ones and in both cases these government will have to keep up with developments in the technology and they suggest that the forces opposed to government may be able to stay a step ahead. This is an interesting thought as technology has been attributed to some extent to the Arab Spring. At the same time two men have been sentenced to four years imprisonment in the United Kingdom for using social software to encourage the recent riots. On balance it seems to me that governments have the power to neutralise the affects of technology in the hands of their opponents. Dan Remenyi

Book Review - the Tools of Government in the Digital age

The Tools of Government in the Digital Age by Christopher Hood and Helen Margetts published by Palgrave 2007 is an ambitious piece of work w...

Book Review - the Tools of Government in the Digital age

The Tools of Government in the Digital Age by Christopher Hood and Helen Margetts published by Palgrave 2007 is an ambitious piece of work w...