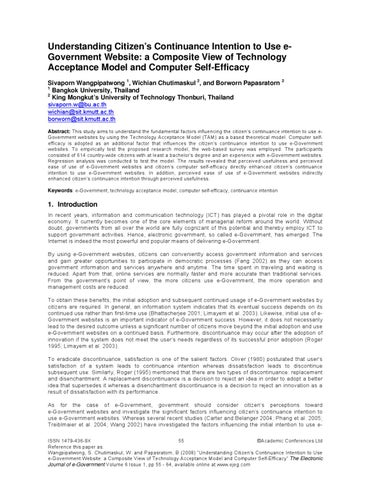 1. Introduction In recent years, information and communication technology (ICT) has played a pivotal role in the digital economy. It currently becomes one of the core elements of managerial reform around the world. Without doubt, governments from all over the world are fully cognizant of this potential and thereby employ ICT to support government activities. Hence, electronic government, so called e-Government, has emerged. The Internet is indeed the most powerful and popular means of delivering e-Government. By using e-Government websites, citizens can conveniently access government information and services and gain greater opportunities to participate in democratic processes (Fang 2002) as they can access government information and services anywhere and anytime. The time spent in traveling and waiting is reduced. Apart from that, online services are normally faster and more accurate than traditional services. From the government’s point of view, the more citizens use e-Government, the more operation and management costs are reduced. To obtain these benefits, the initial adoption and subsequent continued usage of e-Government websites by citizens are required. In general, an information system indicates that its eventual success depends on its continued use rather than first-time use (Bhattacherjee 2001; Limayem et al. 2003). Likewise, initial use of eGovernment websites is an important indicator of e-Government success. However, it does not necessarily lead to the desired outcome unless a significant number of citizens move beyond the initial adoption and use e-Government websites on a continued basis. Furthermore, discontinuance may occur after the adoption of innovation if the system does not meet the user’s needs regardless of its successful prior adoption (Roger 1995; Limayem et al. 2003). To eradicate discontinuance, satisfaction is one of the salient factors. Oliver (1980) postulated that user’s satisfaction of a system leads to continuance intention whereas dissatisfaction leads to discontinue subsequent use. Similarly, Roger (1995) mentioned that there are two types of discontinuance: replacement and disenchantment. A replacement discontinuance is a decision to reject an idea in order to adopt a better idea that supersedes it whereas a disenchantment discontinuance is a decision to reject an innovation as a result of dissatisfaction with its performance. As for the case of e-Government, government should consider citizen’s perceptions toward e-Government websites and investigate the significant factors influencing citizen’s continuance intention to use e-Government websites. Whereas several recent studies (Carter and Belanger 2004; Phang et al. 2005; Treiblmaier et al. 2004; Wang 2002) have investigated the factors influencing the initial intention to use eISSN 1479-436-9X 55 ©Academic Conferences Ltd Reference this paper as: Wangpipatwong, S. Chutimaskul, W. and Papasratorn, B (2008) “Understanding Citizen’s Continuance Intention to Use e-Government Website: a Composite View of Technology Acceptance Model and Computer Self-Efficacy” The Electronic Journal of e-Government Volume 6 Issue 1, pp 55 - 64, available online at www.ejeg.com

2. Theoretical developments The research model used to guide the study is shown in Figure 1. In the following, the meaning and the theories supporting the relationship are presented.

3. Research methodology 3.1 Participants The participants of this study were 614 citizens who hold a university degree and currently live in 46 provinces of 76 provinces across Thailand. The majority of the participants are living in the capital of Thailand (Bangkok) and vicinity (77.4%), followed by the central region (9.8%), the northern region (5.7%), the northeast region (3.6%), and the southern region (3.6%) as shown in Table 1. Table 1: Living region of participants Region Bangkok and vicinity Central North Northeast South

Note: Participants could tick all that apply.

3.2 Instrument development The surveyed items were adapted from previous studies. The items for measuring computer self-efficacy were adapted from Compeau and Higgins (1995). The items used to measure perceived usefulness and perceived ease of use were adapted from Technology Acceptance Model (TAM) with some modification to reflect the context of e-Government websites. The measures of continuance intention to use were adapted from the measures of intention to use of Technology Acceptance Model (TAM) with modification to reflect the intention to continue using e-Government websites. To measure perceived usefulness, perceived ease of use, citizenâ&#x20AC;&#x2122;s computer self-efficacy, and continuance intention to use, 5 items, 4 items, 3 items, and 3 items were used respectively. Each item was rated on a scale of 1 to 5 (Strongly Disagree to Neutral to Strongly Agree). A list of all items is provided in Table 4. Table 4: List of items in survey Construct Perceived Usefulness (PU)

Perceived Ease of Use (PEOU)

The questionnaire was originally designed in English and then translated into Thai for the survey. Afterwards, the Thai version of questionnaire was checked and translated back into English by an independent translator to ensure there was no loss of meaning during the translation as suggested by Zikmund (2003). The process showed there were no discrepancies between the two versions. In addition to the back-translation process, the validity and the reliability of the instrument were confirmed.

The validity of the questionnaire, the ability to measure what it is supposed to measure (Zikmund 2003), was strengthened through an extensive review of the literature and an agreement among professionals in both information technology and statistics areas. In addition, the pretest through 25 convenience samples was employed to determine if the intended audiences had any difficulty understanding the questionnaire and whether there were any ambiguous or biased questions. Based on the feedback of the pretest, one reverse word item was dropped since it caused confusion. To ensure that the measurement items are measuring the same construct, Cronbach’s alpha was employed to measure the internal consistency of multi-item scales. The results of the reliability analysis are presented in Table 5. As the table shows, the reliability analysis gave alpha coefficients exceeding .70 which are typically regarded as an acceptable reliability coefficient (Nunnaly 1978). Furthermore, the reliability analysis results show that the alpha coefficients would not be higher even though an individual item is removed from the scale. This implies that no items contributed to a low internal consistency. Therefore, items measuring the construct dimensions are acceptable and reliable. Table 5: Descriptive statistics of items and Cronbach’s Alpha Construct Mean Perceived Usefulness (PU) PU1 3.024 PU2 2.927 PU3 3.643 PU4 3.713 PU5 3.550 Perceived Ease of Use (PEOU) PEOU1 2.893 PEOU2 2.813 PEOU3 2.933 PEOU4 2.860 Computer Self-Efficacy (CSE) CSE1 4.469 CSE2 3.640 CSE3 3.389 Continuance Intention (CI) CI1 3.235 CI2 3.142 CI3 3.319

3.3 Data collection A web-based survey with a probability list-based method, which samples participants based on a list, was employed to collect data in order to eliminate costs, data coding time, and human-error, and to easily reach citizens in different geographic areas across the country. In addition, the bundled script program was used to check and advise participants, thereby ensuring that all items in the questionnaire were filled in completely and appropriately. To take steps toward ensuring the integrity of the data, the IP address of each participant and the time used for completing the survey were recorded. After the survey was uploaded to the server, the 3,600 invitations for participation, including a link to the website, were randomly emailed to an alumni mailing list of a variety of faculties (i.e. science, agriculture, engineering, pharmacology, liberal arts, business administration, information technology, and humanities) of five universities across five regions of Thailand. The selection of these five universities resulted from a threestage sampling. First, a stratified sampling was performed to cluster Thailand into five regions. Second, a simple random sampling was done to select a university corresponding to each of the five regions. Third, simple random sampling was employed to select some email addresses corresponding to each of the five selected universities. Sending the invitation emails to the alumni mailing list can guarantee that the participants have experience with the Internet and hence probably enable us to reach citizens who have some experience with e-Government websites. In addition, previous studies indicated that e-Government websites are particularly popular among those who have at least a college education (Larsen and Rainie 2002; Wangpipatwong et al. 2005b). Finally, 1,159 e-mail addresses turned out to be invalid and the invitation emails could not be delivered to the recipients. However, there were 2,441 valid e-mails that did reach the recipients.

Responses to the survey were collected for a two-month period. Respondents were screened according to whether they had experience with e-Government websites. Only those who had previous experience continued with the survey. Out of 799 responses, 614 responses indicated experience with e-Government websites. All these 614 responses were then used in the analysis after they were verified to be valid and complete without any unusual data or multiple responses. The number of valid responses conformed to finite population sampling formula (Yamane 1973), along with a 95% confidence level and a 5% precision level.

3.4 Data analysis A series of linear regression analyzes were performed to estimate the path coefficients (standardized regression weights, β). Together with the analysis, the assumptions of regression were examined. There were no problems associated with violations of the regression assumptions.

4. Analysis and results Table 6 contains the descriptive statistics and correlation matrix for all constructs in the research model. As can be seen from the matrix, there is a significant relationship between the continuance intention (CI) and the rest of constructs, although the relationship varies in strength from one construct to the next. Overall, the correlations provided confidence that the measures were functioning effectively. Table 6: Descriptive statistics and correlation matrix Construct PU PEOU CSE CI

on various computer and Internet applications to increase citizen familiarity with computer and information technologies. Before drawing definitive conclusion from these results, it is important to consider the study’s limitations and future research directions. First, although the response rate of this study can be considered high in terms of a web-based survey, the mixed-mode survey which uses several ways of data collection together with the choice of completion method may be employed to increase responses. Second, this study intends to elicit data from knowledgeable citizens who are ready for e-Government. However, there are other citizens who have lower levels of education, lower income, and weaker computer self-efficacy. To regard the digital divide, future research should elicit the data from those citizens who have lower levels of education, lower income, and also citizens who lack access to the Internet. The differences among these groups of citizens should be further explored. Third, the roles of other factors that may correlate with continuance intention were not examined in this study. Thereby, there may be a need to search for additional factors in order to improve the ability to predict the citizen’s continuance intention to use e-Government websites more accurately. To conclude, the results from this study suggest that TAM together with computer self-efficacy can be applied to understand the citizen’s continuance intention to use e-Government websites. Nevertheless, it is important to note that citizens place a different emphasis on the determinants of continuance intention. They focus primarily on perceived usefulness and perceived ease of use, but place less emphasis on computer self-efficacy.

Understanding Citizen's Continuance Intention to Use e-Government Website: a Composite View of...

This study aims to understand the fundamental factors influencing the citizen's continuance intention to use e- Government websites by using...

Understanding Citizen's Continuance Intention to Use e-Government Website: a Composite View of...

This study aims to understand the fundamental factors influencing the citizen's continuance intention to use e- Government websites by using...