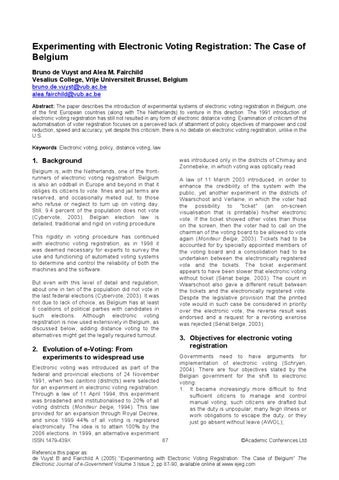 was introduced only in the districts of Chimay and Zonnebeke, in which voting was optically read.

1. Background Belgium is, with the Netherlands, one of the frontrunners of electronic voting registration. Belgium is also an oddball in Europe and beyond in that it obliges its citizens to vote: fines and jail terms are reserved, and occasionally meted out, to those who refuse or neglect to turn up on voting day. Still, 9.4 percent of the population does not vote (Cybervote, 2003). Belgian election law is detailed, traditional and rigid on voting procedure.

A law of 11 March 2003 introduced, in order to enhance the credibility of the system with the public, yet another experiment in the districts of Waarschoot and Verlaine, in which the voter had the possibility to "ticket" (an on-screen visualisation that is printable) his/her electronic vote. If the ticket showed other votes than those on the screen, then the voter had to call on the chairman of the voting board to be allowed to vote again (Moniteur Belge, 2003). Tickets had to be accounted for by specially appointed members of the voting board and a consolidation had to be undertaken between the electronically registered vote and the tickets. The ticket experiment appears to have been slower that electronic voting without ticket (Sénat belge, 2003). The count in Waarschoot also gave a different result between the tickets and the electronically registered vote. Despite the legislative provision that the printed vote would in such case be considered in priority over the electronic vote, the reverse result was endorsed and a request for a revoting exercise was rejected (Sénat belge, 2003).

This rigidity in voting procedure has continued with electronic voting registration, as in 1998 it was deemed necessary for experts to survey the use and functioning of automated voting systems to determine and control the reliability of both the machines and the software. But even with this level of detail and regulation, about one in ten of the population did not vote in the last federal elections (Cybervote, 2003). It was not due to lack of choice, as Belgium has at least 8 coalitions of political parties with candidates in such elections. Although electronic voting registration is now used extensively in Belgium, as discussed below, adding distance voting to the alternatives might get the legally required turnout.

2. Evolution of e-Voting: From experiments to widespread use

Governments need to have arguments for implementation of electronic voting (Schryen, 2004). There are four objectives stated by the Belgian government for the shift to electronic voting: 1. It became increasingly more difficult to find sufficient citizens to manage and control manual voting; such citizens are drafted but as the duty is unpopular, many feign illness or work obligations to escape the duty, or they just go absent without leave (AWOL);

Electronic voting was introduced as part of the federal and provincial elections of 24 November 1991, when two cantons (districts) were selected for an experiment in electronic voting registration. Through a law of 11 April 1994, this experiment was broadened and institutionalised to 20% of all voting districts (Moniteur belge, 1994). This law provided for an expansion through Royal Decree, and since 1999 44% of all voting is registered electronically. The idea is to attain 100% by the 2006 elections. In 1999, an alternative experiment ISSN 1479-439X

Reference this paper as: de Vuyst B and Fairchild A (2005) “Experimenting with Electronic Voting Registration: The Case of Belgium” The Electronic Journal of e-Government Volume 3 Issue 2, pp 87-90, available online at www.ejeg.com

voter must be seen as coming towards the voting station in his municipality. The vote also must be secret: Internet cannot guarantee this. As discussed previously, Belgium is rather strict and very detailed on voting law as it requires voting from its citizens (Cybervote, 2003). A proposal of 20 April 2000 (Sénat belge, 2000a), aimed at modifying the law to legitimise distance voting, however this proposal was not passed, among others because of the low take-up of Internet within Belgium and the Constitution- founded requirement to physically come to the voting station. Distance voting is location independent, which would require changes in Belgian voting law, possibly in the Constitution, to be enabled. The take-up of Internet is not an issue when examining Belgians abroad who want to vote, however, the voting law would need to be changed significantly to avoid the massive paperwork currently involved in voting on election day from outside the country, which results in few Belgians – possibly relieved to be free from the duty to vote – from taking up their right to vote.

4. Registration, but not distance voting The process of voting is similar to the traditional paper-based method. A vote is cast with an optical pen on a computer screen; the vote then is registered on a magnetic card, which the elector puts in an electronic ballot box. The votes are registered and recorded on a floppy disc and then counted electronically. Although innovative, the voting-process doesn't basically change: the voter still casts his vote at a polling station in the secrecy of the voting booth, the vote is registered on a (anonymous) physical (magnetic) card and the vote is not transferred online.

Parliament has seen certain benefits in automation by electronic voting (Doc. 50 0834/001), such as the end of manual tabulation, the speed of the distribution of the results, the simplification and modernisation of the voting procedure. The main criticism has been the reliability issue, and the lack of transparency with the registration of the magnetic cards being counted not seen by the voter, only by the software. This is a valid issue, as manual counting procedures appear more readily accepted by the low tech populace based on familiarity of historical procedure. This is one reason why local town halls were supposed to demonstrate voting machines prior to the election of June 2004.

Nevertheless, the system shows similarities with Internet voting, being the legal recognition of an electronic or digital voting system. The experience, both on legal as on practical level is useful for assessing the legal requirements for an Internet voting system. But Belgium never undertook, and is unlikely to undertake in the near future, any attempt to enable real distance voting. One of the reasons for this may be that the uptake of Internet connections in Belgium is behind in comparison to the rest of Europe. Belgium only has at present approximately one-third of its populace with access to Internet. Hence a proposal to vote by Internet excludes a vast portion of the population and would not be considered.

The Vrije Universiteit Brussel (VUB) published a study on electronic voting, which reports that the method did not influence the outcome of the elections, but did lower the number of abstentions, as it appears no longer possible to cast an invalid vote.

5. Conclusion and remarks This last remark leads to a general one: how much control has the citizen over the voting process? The voting board chairman hands a voter a magnetic card. The voter must trust that this card is not tampered with. When the voter confirms the vote on-screen, s/he must trust that his vote will be registered correctly on the card. The 2003 ticketing experiment cannot totally reassure this assumption. Counting no longer takes place: machines decode the diskettes that register the vote on the basis of the card that are inserted. Only the technicians of private contractors, not the chairmen of voting or counting boards, or any other official, are capable of checking the systems, a matter of concern also to the nine experts (that form the Collège d'Experts supervising the whole of the process) (Sénat belge, 1999; 2000b).

4.2 Assessment of objectives The first objective, that of a reduction of the number of citizens drafted to manage and control voting registration, was not reached. Instead of four citizens assisting the chairman, the number was increased to five, and the secretary of the voting board had to be assisted by an additional secretary with knowledge of IT (Moniteur Belge, 1998). Moreover, voting places did no longer close at 13:00 as in times of paper votes, but stayed open until 15:00, and in places where IT problems caused delays, closed much later. Those that were so unlucky to be drafted for their civic duty had, thus, to work longer than their predecessors. Counting operations were, however, drastically reduced, but no specific cost reduction figures could be gleaned from government data.

Perhaps the single most disturbing fact remains that while experiments continue, there is in Belgium no policy debate over electronic voting registrations objectives and accomplishments. This includes allegations of breaches of voting secrecy, and on the effectiveness of the system in terms of cost as well as in terms of sustainment of the democratic process.

The objective of cost reduction appears not to have been obtained either, although no precise figures have ever been released. The Ministry of the Interior estimated the cost of electronic voting registration to be around 80 eurocent, but this cost assumed an amortisation period of IT hardware over a ten year period – a rather incredible time period – and did perhaps not bring into bearing the cost of technical assistance and repairs. Independent studies therefore concluded that electronic voting registration was likely, and in reality, more costly than the traditional system of manual registration (Bourgeaux, 2001). Ticketing undertaken on 18 May 2003 may have led to further costs.

This lack of a policy debate is all the more odd as, after the 2000 elections, the debate on electronic voting registration in the U.S.A. has become heated (Editorial, 2004; Pogue, 2004) and as it has resulted in lawsuits to block or otherwise condemn the lack of transparency of and control over electronic voting registration and the demands for a ticket confirmation (Zeller, 2004; Pogue, 2004) that are so conspicuously absent in Belgium.

Electronic voting registration has led to more speedy announcements of voting results, as afternoon and evening counting boards were made superfluous.

In the long run, this lack of debate will hinder future e-voting development and may set Belgium up for a catastrophic happening, such as a massive failure of e-voting registration, and the resulting anger of, and dejection by, the citizenry for the democratic political machinery and its politicians. With one in four in Flanders voting last election for the ultra-right Flemish Nationalist party, the need for secure voting registration is key to sustaining an already struggling balance of democracy.

Technically, not many complaints are apparent: the College of Experts accounts for a mistake of 4096 priority votes in Schaarbeek which was likely the result of a spontaneous bit-inversion in the RAM of a PC (Bourgeaux, 2001). The results of the ticketing experiment in Waarschoot lead, however, to some doubts about overall accuracy, if one extrapolates the results of that experiment to the whole of electronic voting registration.

Experimenting with Electronic Voting Registration: The Case of Belgium

The paper describes the introduction of experimental systems of electronic voting registration in Belgium, one of the first European countri...

Experimenting with Electronic Voting Registration: The Case of Belgium

The paper describes the introduction of experimental systems of electronic voting registration in Belgium, one of the first European countri...