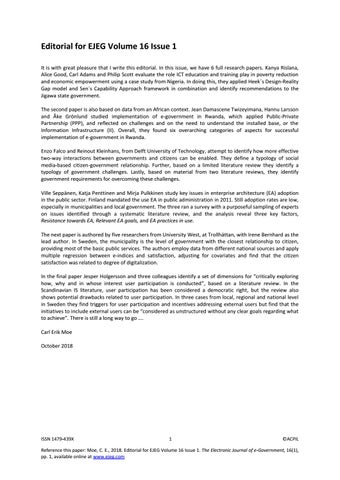 Editorial for EJEG Volume 16 Issue 1 It is with great pleasure that I write this editorial. In this issue, we have 6 full research papers. Kanya Rislana, Alice Good, Carl Adams and Philip Scott evaluate the role ICT education and training play in poverty reduction and economic empowerment using a case study from Nigeria. In doing this, they applied Heek´s Design-Reality Gap model and Sen´s Capability Approach framework in combination and identify recommendations to the Jigawa state government. The second paper is also based on data from an African context. Jean Damascene Twizeyimana, Hannu Larsson and Åke Grönlund studied implementation of e-government in Rwanda, which applied Public-Private Partnership (PPP), and reflected on challenges and on the need to understand the installed base, or the Information Infrastructure (II). Overall, they found six overarching categories of aspects for successful implementation of e-government in Rwanda. Enzo Falco and Reinout Kleinhans, from Delft University of Technology, attempt to identify how more effective two-way interactions between governments and citizens can be enabled. They define a typology of social media-based citizen-government relationship. Further, based on a limited literature review they identify a typology of government challenges. Lastly, based on material from two literature reviews, they identify government requirements for overcoming these challenges. Ville Seppänen, Katja Penttinen and Mirja Pulkkinen study key issues in enterprise architecture (EA) adoption in the public sector. Finland mandated the use EA in public administration in 2011. Still adoption rates are low, especially in municipalities and local government. The three ran a survey with a purposeful sampling of experts on issues identified through a systematic literature review, and the analysis reveal three key factors, Resistance towards EA, Relevant EA goals, and EA practices in use. The next paper is authored by five researchers from University West, at Trollhättan, with Irene Bernhard as the lead author. In Sweden, the municipality is the level of government with the closest relationship to citizen, providing most of the basic public services. The authors employ data from different national sources and apply multiple regression between e-indices and satisfaction, adjusting for covariates and find that the citizen satisfaction was related to degree of digitalization. In the final paper Jesper Holgersson and three colleagues identify a set of dimensions for “critically exploring how, why and in whose interest user participation is conducted”, based on a literature review. In the Scandinavian IS literature, user participation has been considered a democratic right, but the review also shows potential drawbacks related to user participation. In three cases from local, regional and national level in Sweden they find triggers for user participation and incentives addressing external users but find that the initiatives to include external users can be “considered as unstructured without any clear goals regarding what to achieve”. There is still a long way to go …. Carl Erik Moe October 2018