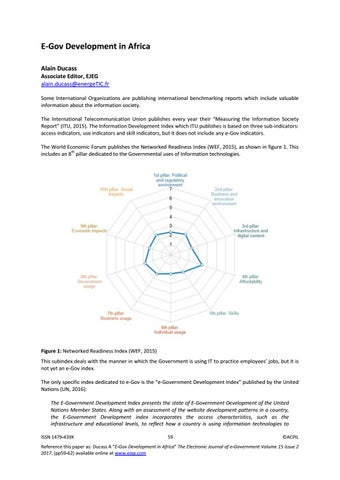 E-Gov Development in Africa Alain Ducass Associate Editor, EJEG alain.ducass@energeTIC.fr Some International Organizations are publishing international benchmarking reports which include valuable information about the information society. The International Telecommunication Union publishes every year their “Measuring the Information Society Report” (ITU, 2015). The Information Development Index which ITU publishes is based on three sub-indicators: access indicators, use indicators and skill indicators, but it does not include any e-Gov indicators. The World Economic Forum publishes the Networked Readiness Index (WEF, 2015), as shown in figure 1. This includes an 8th pillar dedicated to the Governmental uses of Information technologies.

Reference this paper as: Ducass A “E-Gov Development in Africa” The Electronic Journal of e-Government Volume 15 Issue 2 2017, (pp59-62) available online at www.ejeg.com

promote access and inclusion of its people. The EGDI is a composite measure of three important dimensions of e-government, namely: provision of online services, telecommunication connectivity and human capacity. According to this index, as can be seen in figure 2, Europe seems to be the leader and Africa the last region in the world.

Figure 2: 2016 E-Government Development Index Within Africa, as can be seen in figure 3, all regions are not equal:

Figure 3: 2016 E-Governent Development Index within Africa According to the chart, western Africa and middle Africa are the last regions in the world for e-Government. The question now is whether or not they are going to leap-frog development in that field. To answer this question let us first of all set out some basic information: • The African countries used to have an administration with very few services provided to the citizens and companies. Now they all are moving towards e-Gov. While developing e-Government, African countries are developing it together with administrative services. • E-Gov is only one of the three pillars of a digital strategy, including connectivity (to bring broadband to anyone, anywhere, whatever the receiving device), business (to develop national IT skills and

companies as well as B2B, B2C and C2C e-transactions), and e-Gov (to develop e-services between the Government and the civil society, and within the Government itself). A prerequisite for a country to develop e-Gov is that the administrative services and the citizens could be connected to the web with fixed or mobile devices. Generally, this condition is reached in the main towns of the countries but not in the villages, so that e-Gov is still a late arrival in African countries. A main goal of e-strategies is sovereignty, meaning that a country should be able to keep a part of the IT turnover and data inside the country. This goal means that the country has developed and is acting to develop national IT companies. This is definitely a key factor: to customize, maintain and adapt e-Gov applications as well as other IT applications. It is very difficult to compare the e-Gov programs of two different countries because each e-service can have a very different level of interactivity, so that two e-services with the same name, such as a Governmental portal, can mean very different realities and incur very different costs. Culture and corruption are not at all the same in Europe and in Africa. One factor to take into account in Africa is the very low salary that civil servants receive for their jobs. This is the reason why many African civil servants must have a second job to feed their families, or a second revenue stream from the people they help with their administrative activity. Hence it is necessary to investigate the social impact of e-Gov before implementing it. E-Gov is not a project like building a house, but features a program that includes some key projects and a large number of smaller ones.

To go further, figure 4 shows a global chart of an e-Gov Strategy and action plan.

Figure 4: e-Gov strategy and action plan It includes, first of all, a strong management layer, in charge of the goals, the legal frames, the semantic standards, the action plans and also of the ministerial projects coordination. It also includes some major blocs of e-Gov such as an intranet network to connect the public bodies, a data centre to host the e-services, and also of an interoperability and e-Gov services platform, allowing the individual ministries easily to develop e-Services. Then an e-Gov action plan includes one or many portals for the various public services (e-education, e-health, e-agriculture, e-taxes, e-social …). Some of them are top-down designed, allowing the ministries to publish information to the citizens, or companies. Some other ones are said to be “open data”, allowing the public sector to re-use the public information, which is shared with the private sector. Some of them are collaborative, with information provided by the users and the administration together to build up e-Services.

Many other topics about e-Gov could be told, but for now, let us stop on one last one; that is the need for collaborative tools between the civil servants and other persons in charge of e-Gov, to reduce the cost and enhance efficiency. Some words have to be given about the cost-effectiveness of e-Governement. The World bank and some other donors are sometimes ready to invest 50 to 100 million dollars to help a country developing e-Gov, but they have in mind finance, real estate and “brick and mortar” projects rather more than e-projects. This is not completely false logic, because there is a risk of financing useless projects if they are not well coordinated within a national strategy and real action plan. One key success factor is indeed the good circulation of information between the many persons in charge of eGov in a country and in a region. This point will give an occasion for a further article, together with the main publications related to real e-Gov in Africa.