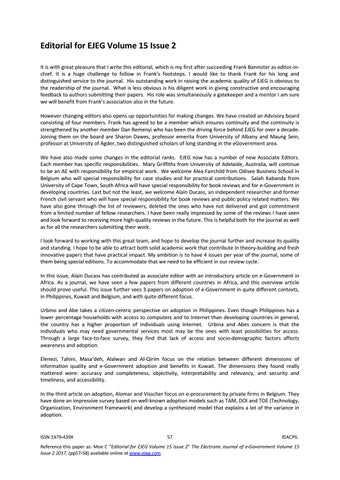 Editorial for EJEG Volume 15 Issue 2 It is with great pleasure that I write this editorial, which is my first after succeeding Frank Bannister as editor-inchief. It is a huge challenge to follow in Frank’s footsteps. I would like to thank Frank for his long and distinguished service to the journal. His outstanding work in raising the academic quality of EJEG is obvious to the readership of the journal. What is less obvious is his diligent work in giving constructive and encouraging feedback to authors submitting their papers. His role was simultaneously a gatekeeper and a mentor I am sure we will benefit from Frank’s association also in the future. However changing editors also opens up opportunities for making changes. We have created an Advisory board consisting of four members. Frank has agreed to be a member which ensures continuity and the continuity is strengthened by another member Dan Remenyi who has been the driving force behind EJEG for over a decade. Joining them on the board are Sharon Dawes, professor emerita from University of Albany and Maung Sein, professor at University of Agder, two distinguished scholars of long standing in the eGovernment area. We have also made some changes in the editorial ranks. EJEG now has a number of new Associate Editors. Each member has specific responsibilities. Mary Griffiths from University of Adelaide, Australia, will continue to be an AE with responsibility for empirical work. We welcome Alea Fairchild from Odisee Business School in Belgium who will special responsibility for case studies and for practical contributions. Salah Kabanda from University of Cape Town, South Africa will have special responsibility for book reviews and for e-Government in developing countries. Last but not the least, we welcome Alain Ducass, an independent researcher and former French civil servant who will have special responsibility for book reviews and public policy related matters. We have also gone through the list of reviewers, deleted the ones who have not delivered and got commitment from a limited number of fellow researchers. I have been really impressed by some of the reviews I have seen and look forward to receiving more high-quality reviews in the future. This is helpful both for the journal as well as for all the researchers submitting their work. I look forward to working with this great team, and hope to develop the journal further and increase its quality and standing. I hope to be able to attract both solid academic work that contribute in theory-building and fresh innovative papers that have practical impact. My ambition is to have 4 issues per year of the journal, some of them being special editions. To accommodate that we need to be efficient in our review cycle. In this issue, Alain Ducass has contributed as associate editor with an introductory article on e-Government in Africa. As a journal, we have seen a few papers from different countries in Africa, and this overview article should prove useful. This issue further sees 3 papers on adoption of e-Government in quite different contexts, in Philippines, Kuwait and Belgium, and with quite different focus. Urbino and Abe takes a citizen-centric perspective on adoption in Philippines. Even though Philippines has a lower percentage households with access to computers and to Internet than developing countries in general, the country has a higher proportion of individuals using Internet. Urbina and Abes concern is that the individuals who may need governmental services most may be the ones with least possibilities for access. Through a large face-to-face survey, they find that lack of access and socio-demographic factors affects awareness and adoption. Elenezi, Tahini, Masa’deh, Alalwan and Al-Qirim focus on the relation between different dimensions of information quality and e-Government adoption and benefits in Kuwait. The dimensions they found really mattered were: accuracy and completeness, objectivity, interpretability and relevancy, and security and timeliness, and accessibility. In the third article on adoption, Alomar and Visscher focus on e-procurement by private firms in Belgium. They have done an impressive survey based on well-known adoption models such as TAM, DOI and TOE (Technology, Organization, Environment framework) and develop a synthesized model that explains a lot of the variance in adoption.

Joshi and Wehn examines the belief that new tools for e-participation can generate dramatic transformations. They do this based on a conceptualization of what e-participation means within the context of multi-level governance. In two European case studies they found a marked shift from the tokenistic forms of eparticipation to more hands-on. However; irrespective of the possibilities new tools offer for co-creation of policies, the paradigm was still mainly “design – defend – implement”. Finally, in a systematic literature review on Enterprise Architecture in Public Sector, Dang and Pekkola find that the overwhelmingly part of publications are from Europe and Asia, where more than half focus on development. What is surprising is that popular, established frameworks such as TOGAF does not seem to be used by governments. Dang and Pekkola call for more research on implementation and challenges such as governance structures, EA management, interoperability and integration, from different contexts and settings. Carl Erik Moe March 2017