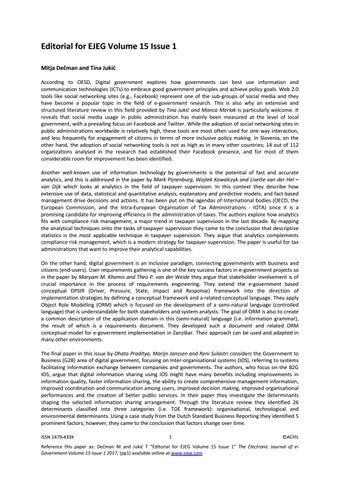 Editorial for EJEG Volume 15 Issue 1 Mitja Dečman and Tina Jukić According to OESD, Digital government explores how governments can best use information and communication technologies (ICTs) to embrace good government principles and achieve policy goals. Web 2.0 tools like social networking sites (e.g., Facebook) represent one of the sub-groups of social media and they have become a popular topic in the field of e-government research. This is also why an extensive and structured literature review in this field provided by Tina Jukić and Manca Merlak is particularly welcome. It reveals that social media usage in public administration has mainly been measured at the level of local government, with a prevailing focus on Facebook and Twitter. While the adoption of social networking sites in public administrations worldwide is relatively high, these tools are most often used for one way interaction, and less frequently for engagement of citizens in terms of more inclusive policy making. In Slovenia, on the other hand, the adoption of social networking tools is not as high as in many other countries; 14 out of 112 organizations analysed in the research had established their Facebook presence, and for most of them considerable room for improvement has been identified. Another well-known use of information technology by governments is the potential of fast and accurate analytics, and this is addressed in the paper by Mark Pijnenburg, Wojtek Kowalczyk and Lisette van der Hel – van Dijk which looks at analytics in the field of taxpayer supervision. In this context they describe how extensive use of data, statistical and quantitative analysis, explanatory and predictive models, and fact-based management drive decisions and actions. It has been put on the agendas of International bodies (OECD, the European Commission, and the Intra-European Organisation of Tax Administrations - IOTA) since it is a promising candidate for improving efficiency in the administration of taxes. The authors explore how analytics fits with compliance risk management, a major trend in taxpayer supervision in the last decade. By mapping the analytical techniques onto the tasks of taxpayer supervision they came to the conclusion that descriptive statistics is the most applicable technique in taxpayer supervision. They argue that analytics complements compliance risk management, which is a modern strategy for taxpayer supervision. The paper is useful for tax administrations that want to improve their analytical capabilities. On the other hand, digital government is an inclusive paradigm, connecting governments with business and citizens (end-users). User requirements gathering is one of the key success factors in e-government projects so in the paper by Maryam M. Khamis and Theo P. van der Weide they argue that stakeholder involvement is of crucial importance in the process of requirements engineering. They extend the e-government based conceptual DPSIR (Driver, Pressure, State, Impact and Response) framework into the direction of implementation strategies by defining a conceptual framework and a related conceptual language. They apply Object Role Modelling (ORM) which is focused on the development of a semi-natural language (controlled language) that is understandable for both stakeholders and system analysts. The goal of ORM is also to create a common description of the application domain in this (semi-natural) language (i.e. information grammar), the result of which is a requirements document. They developed such a document and related ORM conceptual model for e-government implementation in Zanzibar. Their approach can be used and adapted in many other environments. The final paper in this issue by Dhata Praditya, Marijn Janssen and Reni Sulastri considers the Government to Business (G2B) area of digital government, focusing on Inter-organisational systems (IOS), referring to systems facilitating information exchange between companies and governments. The authors, who focus on the B2G IOS, argue that digital information sharing using IOS might have many benefits including improvements in information quality, faster information sharing, the ability to create comprehensive management information, improved coordination and communication among users, improved decision making, improved organisational performances and the creation of better public services. In their paper they investigate the determinants shaping the selected information sharing arrangement. Through the literature review they identified 26 determinants classified into three categories (i.e. TOE framework): organisational, technological and environmental determinants. Using a case study from the Dutch Standard Business Reporting they identified 5 prominent factors; however, they came to the conclusion that factors change over time. ISSN 1479-439X