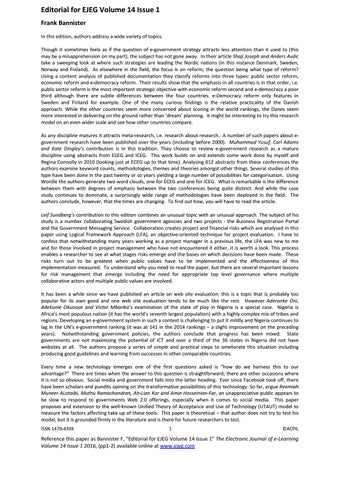 Editorial for EJEG Volume 14 Issue 1 Frank Bannister In this edition, authors address a wide variety of topics. Though it sometimes feels as if the question of e-government strategy attracts less attention than it used to (this may be a misapprehension on my part), the subject has not gone away. In their article Shaji Joseph and Anders Avdic take a sweeping look at where such strategies are leading the Nordic nations (in this instance Denmark, Sweden, Norway and Finland). As elsewhere in the field, the focus is on reform; the question being what type of reform? Using a content analysis of published documentation they classify reforms into three types: public sector reform, economic reform and e-democracy reform. Their results show that the emphasis in all countries is in that order, i.e. public sector reform is the most important strategic objective with economic reform second and e-democracy a poor third although there are subtle differences between the four countries. e-Democracy reform only features in Sweden and Finland for example. One of the many curious findings is the relative practicality of the Danish approach. While the other countries seem more concerned about scoring in the world rankings, the Danes seem more interested in delivering on the ground rather than ‘dream’ planning. It might be interesting to try this research model on an even wider scale and see how other countries compare. As any discipline matures it attracts meta-research, i.e. research about research. A number of such papers about egovernment research have been published over the years (including before 2000). Muhammad Yusuf, Carl Adams and Kate Dingley’s contribution is in this tradition. They choose to review e-government research as a mature discipline using abstracts from ECEG and ICEG. This work builds on and extends some work done by myself and Regina Connolly in 2010 (looking just at ECEG up to that time). Analysing 612 abstracts from these conferences the authors examine keyword counts, methodologies, themes and theories amongst other things. Several studies of this type have been done in the past twenty or so years yielding a large number of possibilities for categorisation. Using Wordle the authors generate two word clouds, one for ECEG and one for ICEG. What is remarkable is the difference between them with degrees of emphasis between the two conferences being quite distinct. And while the case study continues to dominate, a surprisingly wide range of methodologies have been deployed in the field. The authors conclude, however, that the times are changing. To find out how, you will have to read the article. Leif Sundberg’s contribution to this edition combines an unusual topic with an unusual approach. The subject of his study is a number collaborating Swedish government agencies and two projects - the Business Registration Portal and the Government Messaging Service. Collaboration creates project and financial risks which are analysed in this paper using Logical Framework Approach (LFA), an objective-oriented technique for project evaluation. I have to confess that notwithstanding many years working as a project manager in a previous life, the LFA was new to me and for those involved in project management who have not encountered it either, it is worth a look. This process enables a researcher to see at what stages risks emerge and the bases on which decisions have been made. These risks turn out to be greatest when public values have to be implemented and the effectiveness of this implementation measured. To understand why you need to read the paper, but there are several important lessons for risk management that emerge including the need for appropriate top level governance where multiple collaborative actors and multiple public values are involved. It has been a while since we have published an article on web site evaluation; this is a topic that is probably too popular for its own good and one web site evaluation tends to be much like the rest. However Aderonke Oni, Adekunle Okunoye and Victor Mbarika’s examination of the state of play in Nigeria is a special case. Nigeria is Africa’s most populous nation (it has the world’s seventh largest population) with a highly complex mix of tribes and regions. Developing an e-government system in such a context is challenging to put it mildly and Nigeria continues to lag in the UN’s e-government ranking (it was at 141 in the 2014 rankings – a slight improvement on the preceding years). Notwithstanding government policies, the authors conclude that progress has been mixed. State governments are not maximising the potential of ICT and over a third of the 36 states in Nigeria did not have websites at all. The authors propose a series of simple and practical steps to ameliorate this situation including producing good guidelines and learning from successes in other comparable countries. Every time a new technology emerges one of the first questions asked is “how do we harness this to our advantage?” There are times when the answer to this question is straightforward; there are other occasions where it is not so obvious. Social media and government falls into the latter heading. Ever since Facebook took off, there have been scholars and pundits opining on the transformative possibilities of this technology. So far, argue Reemiah Muneer ALotaibi, Muthu Ramachandran, Ah-Lian Kor and Amin Hosseinian-Far, an unappreciative public appears to be slow to respond to governments Web 2.0 offerings, especially when it comes to social media. This paper proposes and extension to the well-known Unified Theory of Acceptance and Use of Technology (UTAUT) model to measure the factors affecting take up of these tools. This paper is theoretical – that author does not try to test his model, but it is grounded firmly in the literature and is there for future researchers to test. ISSN 1479-439X

The Electronic Journal of e-Learning Volume 14 Issue 1 2016 David Baker and Roger Chin’s article examines questions of availability and accessibility. This work extends an earlier piece of research into county government in the USA. Amongst the many interesting things in this paper is the changing nature of the recommendations for ease of availability and access over the years and the fact that, counter to what one might expect, the closeness of financial documents to the front of the web page does not seem to improve over time notwithstanding recommendations that they should be easier to find. In general the authors find that US local government could do better. The authors make a number of recommendations for improvement to practice and for further research. Another Nordic paper in this edition is from Christian Madsen and Pernille Kræmmergaard whose topic is the interaction between single parents regarding on-line benefits. This reminded me of some work done by Stephen Colman and others in London back in the early days of e-government. This is, to use the authors’ phrase, an effort to turn citizens into their own caseworkers. Using domestication theory and a “warm expert” (an intriguing concept) the authors look at how users behave, share practices and even try to circumvent mandatory requirements. The paper is livened up by verbatim extracts from conversations between single parents and it is interesting to see how citizens arrive at their choice of channel with which to do business with the state. This is a rich and engaging piece of research which suggests that channel choice is as much a result of social interaction and process as it is of cognitive rationality. Moving to Denmark, Keld Pedersen’s article addresses that old chestnut of how to get value from IT investments – this time in a local government context. One of many puzzles in information systems generally is why problems which are supposedly easy to fix persist over time. Pedersen’s approach is based on an extensive research project using interviews, documents, the literature and workshops in two local authorities and a covering a number of different services from firefighting to day-care. The author looks closely at one particular service, firefighting, and the use of a shared information system (ODIN). The author shows that there is a pattern of misalignments from process to task context between IT and the tasks that they are supposed to support. There are some interesting parallels here with the work of Elisabeth Frisk on the Swedish Fire Services. Frisk identifies poor decision making and lack of clarity about evaluation – a problem she addresses using a design approach to IT investment decisions. The pathologies identified in this paper show that there is perhaps scope for trying this in Denmark. Two things made the study of e-voting in Australia particularly interesting. One is the fact that voting is compulsory and the other is the very sparseness of the country which makes the economics of mobile voting enormously attractive. In their paper Philip Zada, Grez Falzon and Paul Kwan note that Australia first introduced the secret ballot in 1855 (in Victoria) and since that time not much has changed it seems. The case for Internet or i-Voting is clear, but in order to use this system voters must satisfy certain criteria (such as being 20 km or more from a polling station). Using a survey, the authors examine the possibilities and limitations of using ICT for voting as well as the knowledgeability of the Australian voter when it comes to doing things online. Being Australia the paper is full of quirky facts (my favourite being that one of the main things Australians like about voting is “sausage sizzle”. I’ll let you find out what sausage sizzle is). This paper is rich with all sorts of information about voter perceptions. At the end the authors come up with five hypotheses which will be the subject of the next stage of their research. One of many findings is that voters are surprisingly strongly in favour of mobile voting despite the risks. Finally (really finally!) this is my last editorial for EJEG. On June 30th 2016 I stood down as Editor after 15 years in the job and handed over the reins to capable hands of Carl Erik Moe. Editing a journal like this is a labour of love, but it is also a job in which one perforce learns a great deal from reading each submission (the great, the good and the, let’s say, not quite so good) as it arrives. When the journal was first established, e-journals, whilst not unknown, were still something of a novelty and how such a business model might work in the long term was something yet to be worked out. I think that all concerned can be proud that EJEG has survived and thrived and is the third longest standing egovernment journal still being published today (the oldest being Government Information Quarterly and Information Polity). A journal like EJEG has a mission not just to publish good research and interesting ideas, but to help its contributors improve their work and to help those whose papers are rejected to understand why so that they can do better next time. I hope we have and continue to meet these criteria. There is, as always, a large number of people to whom to say I would like to say thank you. First there are my three AEs, Carl Erik, Mary Griffith and Les Worrall. Then the three administrators with whom I have worked over the years, Anna, Richard and Meryl as well as the ACI/ACPIL team Sue, Dan and Louise Remenyi , Mandy, Carol and several others over the years. Good luck to all with the future of the journal. Frank Bannister July 2016