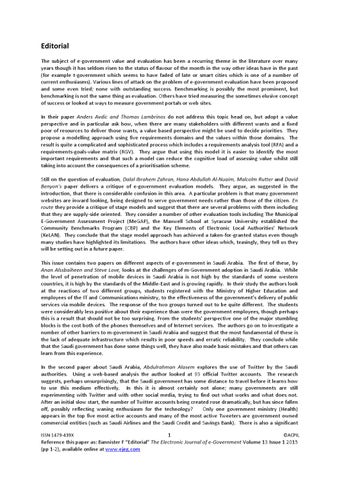 Editorial The subject of e-government value and evaluation has been a recurring theme in the literature over many years though it has seldom risen to the status of flavour of the month in the way other ideas have in the past (for example t-government which seems to have faded of late or smart cities which is one of a number of current enthusiasms). Various lines of attack on the problem of e-government evaluation have been proposed and some even tried; none with outstanding success. Benchmarking is possibly the most prominent, but benchmarking is not the same thing as evaluation. Others have tried measuring the sometimes elusive concept of success or looked at ways to measure government portals or web sites. In their paper Anders Avdic and Thomas Lambrinos do not address this topic head on, but adopt a value perspective and in particular ask how, when there are many stakeholders with different wants and a fixed poor of resources to deliver those wants, a value based perspective might be used to decide priorities. They propose a modelling approach using five requirements domains and the values within those domains. The result is quite a complicated and sophisticated process which includes a requirements analysis tool (RFA) and a requirements-goals-value matrix (RGV). They argue that using this model it is easier to identify the most important requirements and that such a model can reduce the cognitive load of assessing value whilst still taking into account the consequences of a prioritisation scheme. Still on the question of evaluation, Dalal Ibrahem Zahran, Hana Abdullah Al-Nuaim, Malcolm Rutter and David Benyon’s paper delivers a critique of e-government evaluation models. They argue, as suggested in the introduction, that there is considerable confusion in this area. A particular problem is that many government websites are inward looking, being designed to serve government needs rather than those of the citizen. En route they provide a critique of stage models and suggest that there are several problems with them including that they are supply-side oriented. They consider a number of other evaluation tools including The Municipal E-Government Assessment Project (MeGAP), the Maxwell School at Syracuse University established the Community Benchmarks Program (CBP) and the Key Elements of Electronic Local Authorities’ Network (KeLAN). They conclude that the stage model approach has achieved a taken-for-granted status even though many studies have highlighted its limitations. The authors have other ideas which, teasingly, they tell us they will be setting out in a future paper. This issue contains two papers on different aspects of e-government in Saudi Arabia. The first of these, by Anan Alssbaiheen and Steve Love, looks at the challenges of m-Government adoption in Saudi Arabia. While the level of penetration of mobile devices in Saudi Arabia is not high by the standards of some western countries, it is high by the standards of the Middle-East and is growing rapidly. In their study the authors look at the reactions of two different groups, students registered with the Ministry of Higher Education and employees of the IT and Communications ministry, to the effectiveness of the government’s delivery of public services via mobile devices. The response of the two groups turned out to be quite different. The students were considerably less positive about their experience than were the government employees, though perhaps this is a result that should not be too surprising. From the students’ perspective one of the major stumbling blocks is the cost both of the phones themselves and of Internet services. The authors go on to investigate a number of other barriers to m-government in Saudi Arabia and suggest that the most fundamental of these is the lack of adequate infrastructure which results in poor speeds and erratic reliability. They conclude while that the Saudi government has done some things well, they have also made basic mistakes and that others can learn from this experience. In the second paper about Saudi Arabia, Abdulrahman Alasem explores the use of Twitter by the Saudi authorities. Using a web-based analysis the author looked at 93 official Twitter accounts. The research suggests, perhaps unsurprisingly, that the Saudi government has some distance to travel before it learns how to use this medium effectively. In this it is almost certainly not alone; many governments are still experimenting with Twitter and with other social media, trying to find out what works and what does not. After an initial slow start, the number of Twitter accounts being created rose dramatically, but has since fallen off, possibly reflecting waning enthusiasm for the technology? Only one government ministry (Health) appears in the top five most active accounts and many of the most active Tweeters are government owned commercial entities (such as Saudi Airlines and the Saudi Credit and Savings Bank). There is also a significant 1 ©ACPIL Reference this paper as: Bannister F “Editorial” The Electronic Journal of e-Government Volume 13 Issue 1 2015 (pp 1-2), available online at www.ejeg.com ISSN 1479-439X

Electronic Journal of e-Government Volume 13 Issue 1 2015 Pareto effect with a small number of agencies accounting for over half of the traffic. The government of Saudi Arabia, the author concludes, like other governments, needs to move beyond ad hoc actions and develop a coherent strategy for social media On a very different topic, Ann Marie Johnson and Alexandru Roman delve into e-participation and whether, in their own words, e-rulemaking has led to more meaningful participation. The concept of rule-making goes back a long way; it was formally defined in the USA in a 1946 Act. The construction of rules in a modern society is usually a complex process often involving numerous agents and agencies and is often the subject of bruising battles between partisan interests. In the US the number of rules created each year is considerable and it is an expensive process though the benefits of good rules are also high. This paper asks whether and to what extent ICT can help reduce costs and increase effectiveness by enabling more people to engage in the design of rules. This is a rich and complex contribution to this discussion which cannot be readily summarised in a single paragraph. The authors present a complex and carefully argued case that using technology is more complicated that it may first seem and that here, as elsewhere in discussed of e-democracy, we need to be wary of hyperbolic claims about transformative impact of technology. e-Justice is a niche literature within the wider field of e-government, but it is such a large aspect of modern public administration that the impact of technology in this area are important to understand and to get right. How can ICT deliver better, faster and fairer justice? Iina Aaltonen, Jari Laarni and Karo Tammela consider one aspect of this rather large question from a Finnish perspective. In a detailed study of an advanced information system (AIPA or Aineistopankki, databank in English), they talked and worked with key actors in the justice system from judges to administrative staff to assess their visions and their hopes. Actors had a grounded approach; their priorities were to get basic systems working efficiently and to move on to more visionary technologies later. One important feature of the research approach is that it considers the entire chain of events and activities in the system from an initial police investigation through to an appeal. The research looks at which might be achieved over a reasonably long period starting from 2011 and asking actors for their vision of the potential contribution and role of ICT in their work in 2015. Noting that ambitious projects like AIPA have failed in other countries they discuss the numerous obstacles in the way of implementation and how such obstacles can be overcome. Frank Bannister November 2015