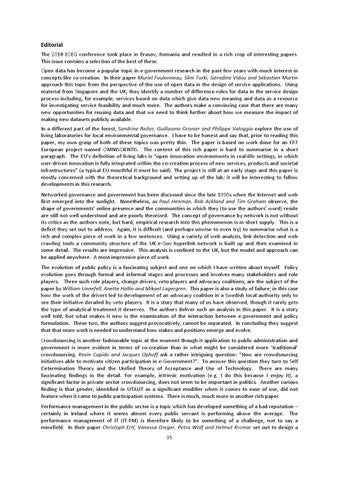 Editorial The 2014 ECEG conference took place in Brasov, Romania and resulted in a rich crop of interesting papers. This issue contains a selection of the best of these. Open data has become a popular topic in e-government research in the past few years with much interest in concepts like co-creation. In their paper Muriel Foulonneau, Slim Turki, Géradine Vidou and Sébastien Martin approach this topic from the perspective of the use of open data in the design of service applications. Using material from Singapore and the UK, they identify a number of difference roles for data in the service design process including, for example, services based on data which give data new meaning and data as a resource for investigating service feasibility and much more. The authors make a convincing case that there are many new opportunities for reusing data and that we need to think further about how we measure the impact of making new datasets publicly available. In a different part of the forest, Sandrine Reiter, Guillaume Gronier and Philippe Valoggia explore the use of living laboratories for local environmental governance. I have to be honest and say that, prior to reading this paper, my own grasp of both of these topics was pretty thin. The paper is based on work done for an FP7 European project named OMNISCIENTIS. The content of this rich paper is hard to summarise in a short paragraph. The EU’s definition of living labs is “open innovation environments in real-life settings, in which user-driven innovation is fully integrated within the co-creation process of new services, products and societal infrastructures” (a typical EU mouthful it must be said). The project is still at an early stage and this paper is mostly concerned with the theoretical background and setting up of the lab; it will be interesting to follow developments in this research. Networked governance and government has been discussed since the late 1990s when the Internet and web first emerged into the sunlight. Nonetheless, as Paul Henman, Rob Ackland and Tim Graham observe, the shape of governments’ online presence and the communities in which they (to use the authors’ word) reside are still not well understood and are poorly theorized. The concept of governance by network is not without its critics as the authors note, but hard, empirical research into this phenomenon is in short supply. This is a deficit they set out to address. Again, it is difficult (and perhaps unwise to even try) to summarise what is a rich and complex piece of work in a few sentences. Using a variety of web analysis, link detection and web crawling tools a community structure of the UK e-Gov hyperlink network is built up and then examined in some detail. The results are impressive. This analysis is confined to the UK, but the model and approach can be applied anywhere. A most impressive piece of work. The evolution of public policy is a fascinating subject and one on which I have written about myself. Policy evolution goes through formal and informal stages and processes and involves many stakeholders and role players. Three such role players, change drivers, veto players and advocacy coalitions, are the subject of the paper by William Linnefell, Anette Hallin and Mikael Lagergren. This paper is also a study of failure; in this case how the work of the drivers led to development of an advocacy coalition in a Swedish local authority only to see their initiative derailed by veto players. It is a story that many of us have observed, though it rarely gets the type of analytical treatment it deserves. The authors deliver such an analysis in this paper. It is a story well told, but what makes it new is the examination of the interaction between e-government and policy formulation. These two, the authors suggest provocatively, cannot be separated. In concluding they suggest that that more work is needed to understand how stakes and positions emerge and evolve. Crowdsourcing is another fashionable topic at the moment though it application to public administration and government is more evident in terms of co-creation than in what might be considered more ‘traditional’ crowdsourcing. Kevin Cupido and Jacques Ophoff ask a rather intriguing question: “How are crowdsourcing initiatives able to motivate citizen participation in e-Government?”. To answer this question they turn to Self Determination Theory and the Unified Theory of Acceptance and Use of Technology. There are many fascinating findings in the detail. For example, intrinsic motivation (e.g. I do this because I enjoy it), a significant factor in private sector crowdsourcing, does not seem to be important in politics. Another curious finding is that gender, identified in UTAUT as a significant modifier when it comes to ease of use, did not feature when it came to public participation systems. There is much, much more in another rich paper. Performance management in the public sector is a topic which has developed something of a bad reputation – certainly in Ireland where it seems almost every public servant is performing above the average. The performance management of IT (IT-PM) is therefore likely to be something of a challenge, not to say a minefield. In their paper Christoph Ertl, Vanessa Greger, Petra Wolf and Helmut Krcmar set out to design a 95

framework which indentifies the factor affecting or influencing IT-PM in public organizations which they distinguish from public administration on the one hand and private organizations on the other. They make this distinction under a number of headings (structure, goals, values, etc.) and using this propose their own framework for organizational attributes in the public sector which affect IT-PM. Drawing from the literature, they present a list of factors influencing objectives, stability and time horizon, complexity and managerial values in public organizations. The resulting adapted framework is presented by the authors as a tool which managers can use for IT-PM. Like performance management, and in some ways related to it, benchmarking remains a favourite sport of bodies like the EU and the UN. Michaelene Cox goes under the hood of the EU benchmarking and the Digital 2020 Initiative comparing states in the eastern and western sides of the EU. The EU, like many other democratic institutions, promotes accountability, transparency and e-participation which are all taken to be inherently good things, though some scholars have questioned various aspects of each. Using data from various benchmarks, the author shows that the western end of the union is in considerably healthier shape than the easier side, something which probably does not come as too much of a surprise. What is interesting however is the evident correlation between the quality of e-government as measure by benchmarks, corruption as measure by Transparency International and e-government development as measured by the UN. While it is important to recall that correlation and causation are not the same thing, the results are suggestive. Notwithstanding the title of the paper, the author suggests that while there may not be any real conundrums in benchmarking, the ability of ICT to, for example, sustain transparency and accountability is not yet proven. Another component of the EU’s digital agenda is a common electronic identity or e-ID. This is another fraught topic with different legal systems, different technical standards as well as different cultural attitudes to privacy, security and citizen freedom being just part of the mix. How might the EU gain broad citizen acceptance for such a concept? This is the topic of the paper by Jérôme Brugger, Marianne Fraefel and Reinhard Riedl. The authors tackle the problem head on by analyzing acceptance factors for such technology. Using a variety of theories (including diffusion of innovation, various variations on the technology acceptance model and institutional actor theory) and a study of the current state of play they propose a stakeholder and systems acceptance framework. They provide support for the framework using preliminary findings from the STORK 2.0 project looking at the issues from the perspectives of government stakeholders, service providers and end users. They offer their framework as a basis for further empirical research. Most conferences include a few meta papers and ECEG is no exception. One such paper in 2014 was an analysis by Muhammad Yusuf, Carl Adams and Kate Dingley of methodologies and research philosophies found in paper at ECEG and ICEG. This has been done before for other conferences by various authors and for ECEG by Regina Connolly and myself in 2010. This paper builds on this earlier work. The conclusions are not, perhaps, that surprising, but are valuable to have confirmed. The case study dominates in both conferences (one of the curious details in the paper is that the most common approaches used do not differ much between the two conferences, though the batting order is not identical). What is striking is the dominance of the case study. In ECEG, under methodologies, 325 of the papers examined used this approach. The next highest was the survey which clocked in at a lowly 39 appearances. Usage of most of the methodologies was measurable in single digits. The pattern in ICEG has not been much different. Not only that, but the dominance of the case study has increased over the years (though it has decreased slightly in ICEG, the overall total is up). The author suggest that now might be a good time for some more positivist research in e-government. A rather different paper from all of the preceding is that by Choompol Boonmee and Jirasuk Sugandhajati. This paper is the story of a simple, but highly effective idea: an electronic smart box that significantly shortens the amount of time that Thai citizens have to spend filling out government forms. This is done by enabling the citizen to put his or her e-ID card into a reader and using the data on the card to populate and print out the forms, thus saving about 20 minutes every time a form has to be filled. The economic impact of simple technologies like this is, when you add up all the time saved and the errors eliminated, can be dramatic. The box has a card reader, a webcam and a keypad and costs only $50 a year to maintain. Some years ago I was looking for examples of great e-government applications. Ideas which did not cost much, but which helped both the citizen and the state. This is a good example of such a system. Given all the discussion of egovernment failures, this goes to show that simple ideas are often best. Frank Bannister 96