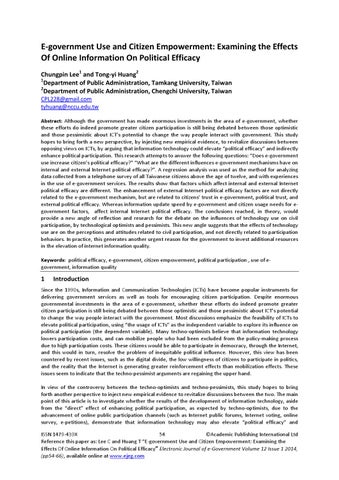 Since the 1990s, Information and Communication Technologies (ICTs) have become popular instruments for delivering government services as well as tools for encouraging citizen participation. Despite enormous governmental investments in the area of e-government, whether these efforts do indeed promote greater citizen participation is still being debated between those optimistic and those pessimistic about ICT’s potential to change the way people interact with the government. Most discussions emphasize the feasibility of ICTs to elevate political participation, using “the usage of ICTs” as the independent variable to explore its influence on political participation (the dependent variable). Many techno-optimists believe that information technology lowers participation costs, and can mobilize people who had been excluded from the policy-making process due to high participation costs. These citizens would be able to participate in democracy, through the Internet, and this would in turn, resolve the problem of inequitable political influence. However, this view has been countered by recent issues, such as the digital divide, the low willingness of citizens to participate in politics, and the reality that the Internet is generating greater reinforcement effects than mobilization effects. These issues seem to indicate that the techno-pessimist arguments are regaining the upper hand. In view of the controversy between the techno-optimists and techno-pessimists, this study hopes to bring forth another perspective to inject new empirical evidence to revitalize discussions between the two. The main point of this article is to investigate whether the results of the development of information technology, aside from the “direct” effect of enhancing political participation, as expected by techno-optimists, due to the advancement of online public participation channels (such as Internet public forums, Internet voting, online survey, e-petitions), demonstrate that information technology may also elevate “political efficacy” and ISSN 1479-439X 54 ©Academic Publishing International Ltd Reference this paper as: Lee C and Huang T “E-government Use and Citizen Empowerment: Examining the Effects Of Online Information On Political Efficacy” Electronic Journal of e-Government Volume 12 Issue 1 2014, (pp54-66), available online at www.ejeg.com

The development of government affairs in the digital direction has been proceeding for more than 20 years since 1990. The scope of e-government is extensive: from the emphasis on customer service functions, such as online services and the provision of information, to the emphasis on political participation and enhancement of the quality of democracy via e-democracy. All of these resulted from the digitalization of government affairs (Mahrer and Krimmer, 2005; Bishop and Anderson, 2004; Backus, 2001; Chadwick, 2003; Lenihan, 2005). According to the categorization by Sakowicz (2004), digitization of government affairs includes electronic services, electronic management, electronic business, and electronic democracy. Of which, electronic management primarily focus on the internal aspect of organizations (G2G), electronic business focus on the relationship with the business sector (G2B), and e-service and e-democracy focus on the people (G2C). Early discussions on e-government generally focus on how to use information and communication technology to elevate administrative efficiency, effectiveness and government responsiveness, or to increase satisfaction of the people. In recent years, a lot of literature has started to focus on the influence of e-government on the www.ejeg.com

Chungpin Lee and Tong-yi Huang quality of democracy. Discussing how to use information technology to promote, improve, and even expand the realization of democracy, or the concept of e-democracy. E-democracy has two major meanings: the first meaning is to design and use information and communication technologies to elevate the practice of democratic politics. The second and deeper meaning is to use the dissemination of information and communication technologies to elevate the vitality and legitimacy of democracy (Shane, 2004). Caldow (2004) argued that types of e-democracy can be divided into unidirectional provision of information, bidirectional channels with feedback mechanisms, and partnerships that allow citizens to participate in policy creation. The policy objectives of e-democracy include (OECD, 2003): 

Provide more accurate and suitable policy-related information to the people.

Use electronic means to conduct democratic participation, in the hopes of quickly organizing the opinions of the people.

Monitor procedures and make evaluations at any time.

Operationalized question 1. On the whole, do you think information provided by government websites are correct?

citizens’ trust in the information update speed of e-government websites

2. On the whole, do you think government websites update information quickly?

3. On the whole, do you think information provided by government websites is easy to understand?

Citizens’ trust in egovernment’s ability to send online service application information only to secure servers and not lose them in the process.

4. Do you think that the government, through its provision of services using the internet, provides adequate protection for citizens’ private information?

citizens’ trust in the government’s responsiveness to citizen needs

Ratio scale (an integer larger or equal to one)

Data from this article was taken from a research sponsored by the Executive Yuan’s Research, Development and Evaluation Commission, “E-Governance Impact Framework: G2C and G2B”. The study surveyed residents of Taiwan who live in the 25 counties and cities, those who are over 12 years old are designated as research targets. Computer Assisted Telephone Interviews were used to conduct phone interviews. The duration of investigation was between August 17, 2009 and August 20, 2009; 2,154 valid samples were completed. Since this study seeks to explore the influence of e-government on citizen Internet political efficacy, only citizens who have visited government agency websites are used as research subjects, of which there are 781. Of the 781 research subjects, 343 (43.8%) are male and 440 (56.2%) are female. In terms of age, it was found that 36.7% are under the age of 29, 28.5% are between the ages 30-39, and the remaining samples are over the age of 40 (34.8%). Finally, in terms of education level, the smallest group is comprised of those with an education level of under/with junior high, numbering 43 (5.5%). Those with at least a high school (vocation) level of education numbered 537 (25.7%), while the largest group is comprised of those with an education level of over/with college (68.8%). The sample structure is shown in Table 2. In the following sections, this study will use questionnaire data from this database to establish a multiple regression model to understand whether the usage of e-government affects the Internet political efficacy of citizens.

External Internet Political Efficacy “Because of the Internet, government officials would be more concerned about what members of the general public are thinking.” Do you agree with this statement? number

Internal Internet Political Efficacy “By using the Internet, the general public can better understand politics.” Do you agree with this statement? number

Since the variables used in this research were mostly ordinal scale data, Kendall’s tau-b is used to analyze the relationships between variables. Table 4 reveals that as age decreases, internal internet political efficacy rises.（tau-b=-.089） This clearly shows that the younger generations place more confidence in the elevation www.ejeg.com

In addition to the variable analyses mentioned above, the difference in internet political efficacy in relation to gender was found to be insignificant after a chi-square test was performed. In the following section, a linear regression analysis was performed to analyze the relationship of each individual independent variable in relation to internet political efficacy, when considering all other variables.

Chungpin Lee and Tong-yi Huang Svennevig (2008), and Lee (2006). Although e-government could increase interaction between citizens and the government, if the government does not have sufficient responsiveness toward citizens, it would accumulate negative interaction experiences between the citizens and the government. This would create a serious and negative influence on external Internet political efficacy. Therefore, aside from enhancing the quality of egovernment websites, it should also be examined whether the government can deal with citizen needs that stem from rapid growth due to the Internet channels. When citizens can more easily express their opinions on the Internet, the government should also strengthen its ability to respond to a broad range of needs. Only then would the positive effects of e-government outweigh its negative impacts. In terms of research, this study hopes to supplement the insufficient attention paid to Internet political efficacy in the past, but there are still improvements to be made in terms of sample selection and the establishment of the research framework. Future studies could consider using more representative samples in a more comprehensive research framework, extending the model from political efficacy to later democratic participation activities would make the research results more valuable.

E-government Use and Citizen Empowerment: Examining the Effects Of Online Information On...

Abstract: Although the government has made enormous investments in the area of e-government, whether these efforts do indeed promote greater...

E-government Use and Citizen Empowerment: Examining the Effects Of Online Information On...

Abstract: Although the government has made enormous investments in the area of e-government, whether these efforts do indeed promote greater...