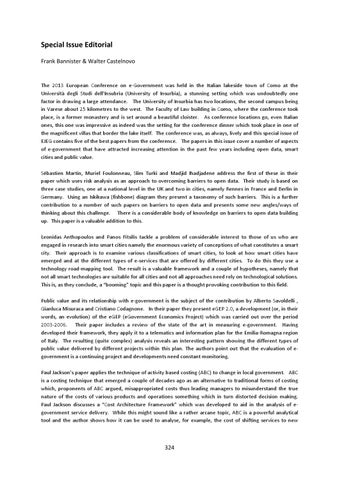 The 2013 European Conference on e-Government was held in the Italian lakeside town of Como at the Università degli Studi dell'Insubria (University of Insurbia), a stunning setting which was undoubtedly one factor in drawing a large attendance. The University of Insurbia has two locations, the second campus being in Varese about 25 kilometres to the west. The Faculty of Law building in Como, where the conference took place, is a former monastery and is set around a beautiful cloister. As conference locations go, even Italian ones, this one was impressive as indeed was the setting for the conference dinner which took place in one of the magnificent villas that border the lake itself. The conference was, as always, lively and this special issue of EJEG contains five of the best papers from the conference. The papers in this issue cover a number of aspects of e-government that have attracted increasing attention in the past few years including open data, smart cities and public value. Sébastien Martin, Muriel Foulonneau, Slim Turki and Madjid Ihadjadene address the first of these in their paper which uses risk analysis as an approach to overcoming barriers to open data. Their study is based on three case studies, one at a national level in the UK and two in cities, namely Rennes in France and Berlin in Germany. Using an Iskikawa (fishbone) diagram they present a taxonomy of such barriers. This is a further contribution to a number of such papers on barriers to open data and presents some new angles/ways of thinking about this challenge. There is a considerable body of knowledge on barriers to open data building up. This paper is a valuable addition to this. Leonidas Anthopoulos and Panos Fitsilis tackle a problem of considerable interest to those of us who are engaged in research into smart cities namely the enormous variety of conceptions of what constitutes a smart city. Their approach is to examine various classifications of smart cities, to look at how smart cities have emerged and at the different types of e-services that are offered by different cities. To do this they use a technology road-mapping tool. The result is a valuable framework and a couple of hypotheses, namely that not all smart technologies are suitable for all cities and not all approaches need rely on technological solutions. This is, as they conclude, a “booming” topic and this paper is a thought provoking contribution to this field. Public value and its relationship with e-government is the subject of the contribution by Alberto Savoldelli , Gianluca Misuraca and Cristiano Codagnone. In their paper they present eGEP 2.0, a development (or, in their words, an evolution) of the eGEP (eGovernment Economics Project) which was carried out over the period 2003-2006. Their paper includes a review of the state of the art in measuring e-government. Having developed their framework, they apply it to a telematics and information plan for the Emilia-Romagna region of Italy. The resulting (quite complex) analysis reveals an interesting pattern showing the different types of public value delivered by different projects within this plan. The authors point out that the evaluation of egovernment is a continuing project and developments need constant monitoring. Paul Jackson’s paper applies the technique of activity based costing (ABC) to change in local government. ABC is a costing technique that emerged a couple of decades ago as an alternative to traditional forms of costing which, proponents of ABC argued, misappropriated costs thus leading managers to misunderstand the true nature of the costs of various products and operations something which in turn distorted decision making. Paul Jackson discusses a “Cost Architecture Framework” which was developed to aid in the analysis of egovernment service delivery. While this might sound like a rather arcane topic, ABC is a powerful analytical tool and the author shows how it can be used to analyse, for example, the cost of shifting services to new

channels. This is an article well worth the attention of anybody interesting in informed decision making about e-government delivery. The final paper in this issue is on a more specialised topic, namely the evaluation of trusted and reliable esignatures in the public sector. In their paper Klaus Stranacher, Vesna Krnjic, Bernd Zwattendorfer and Thomas Zefferer first present an overview of the concept of electronic signing and the basic principles of redactable signatures as well as the (rather curious) concept of â&#x20AC;&#x2DC;blankâ&#x20AC;&#x2122; electronic sgnatues (read the paper to find out more!). There has been much research into electronic signature. The paper then focuses on some specific implications of this for the public sector. This is a rich paper which it is not possible to summarise in a few sentences; for anybody who would like a good introduction to this field and an excellent overview of the challenges of implementing such systems, this paper is highly recommended.