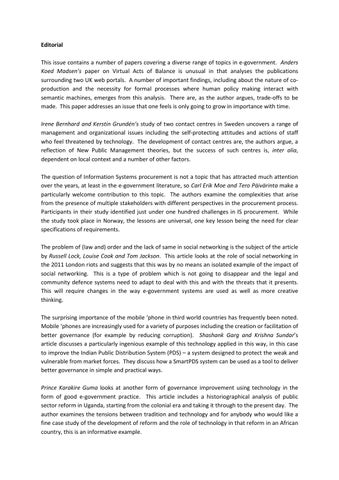 Editorial This issue contains a number of papers covering a diverse range of topics in e-government. Anders Koed Madsen’s paper on Virtual Acts of Balance is unusual in that analyses the publications surrounding two UK web portals. A number of important findings, including about the nature of coproduction and the necessity for formal processes where human policy making interact with semantic machines, emerges from this analysis. There are, as the author argues, trade-offs to be made. This paper addresses an issue that one feels is only going to grow in importance with time. Irene Bernhard and Kerstin Grundén’s study of two contact centres in Sweden uncovers a range of management and organizational issues including the self-protecting attitudes and actions of staff who feel threatened by technology. The development of contact centres are, the authors argue, a reflection of New Public Management theories, but the success of such centres is, inter alia, dependent on local context and a number of other factors. The question of Information Systems procurement is not a topic that has attracted much attention over the years, at least in the e-government literature, so Carl Erik Moe and Tero Päivärinta make a particularly welcome contribution to this topic. The authors examine the complexities that arise from the presence of multiple stakeholders with different perspectives in the procurement process. Participants in their study identified just under one hundred challenges in IS procurement. While the study took place in Norway, the lessons are universal, one key lesson being the need for clear specifications of requirements. The problem of (law and) order and the lack of same in social networking is the subject of the article by Russell Lock, Louise Cook and Tom Jackson. This article looks at the role of social networking in the 2011 London riots and suggests that this was by no means an isolated example of the impact of social networking. This is a type of problem which is not going to disappear and the legal and community defence systems need to adapt to deal with this and with the threats that it presents. This will require changes in the way e-government systems are used as well as more creative thinking. The surprising importance of the mobile ‘phone in third world countries has frequently been noted. Mobile ‘phones are increasingly used for a variety of purposes including the creation or facilitation of better governance (for example by reducing corruption). Shashank Garg and Krishna Sundar’s article discusses a particularly ingenious example of this technology applied in this way, in this case to improve the Indian Public Distribution System (PDS) – a system designed to protect the weak and vulnerable from market forces. They discuss how a SmartPDS system can be used as a tool to deliver better governance in simple and practical ways. Prince Karakire Guma looks at another form of governance improvement using technology in the form of good e-government practice. This article includes a historiographical analysis of public sector reform in Uganda, starting from the colonial era and taking it through to the present day. The author examines the tensions between tradition and technology and for anybody who would like a fine case study of the development of reform and the role of technology in that reform in an African country, this is an informative example.

Another paper from sub Saharan Africa on a similar theme is provided by Quinta Nven-akeng Nkohkwo and Sirajul Islam who undertake an extensive literature review of academic contributions on this subject. This article not only provides a valuable point of reference for scholars in this field, but the authors also suggest a taxonomy of contributions from which they distil a number of challenges facing governments who are trying to implement e-government in this region. A third paper from sub Saharan Africa is contributed by Kituyi Mayoka. It is interesting to compare this with the case Uganda a little over a thousand kilometres or so to the north. The author provides a context/background for Malawi including a comparison with neighbouring states. In terms of the four stage Layne and Lee model, only one of the websites examined in the study has advanced beyond stage two suggesting that Malawi has a distance to travel. Based on his research the author makes a number of suggestions for governments seeking to make e-government more effective. Rui Pedro Lourenço, Patrícia Moura e Sá, Susana Jorge and Anna Francesca Pattaro throws a new light on the much discussed question of transparency, looking a model and applications of this model to two subsets of local municipalities, one in Portugal and one in Italy. One output of the model is a Transparency Index which the authors use to measure how “open” different municipalities are in practice. Their results suggest that the municipalities are not taking advantage of Internet technology to become as transparent as they could be; if more openness is to be achieved, then more than high level policy directives and legislation will be needed. Finally Dalibor Stanimirovic and Mirko Vintar examine the thorny question of evaluation of egovernment and specifically the development of an ‘integrated indicator’ model. The authors identify 51 existing models. They analyse the characteristics of these models and, drawing from this, propose a conceptualisation of an integrated model. They suggest a number of evaluation levels and aspects which could be applied to analyse different policies. This is a thought provoking article which makes a novel contribution to this discourse. As always, I hope that you find these articles interesting and informative. Frank Bannister Editor. November 2013.