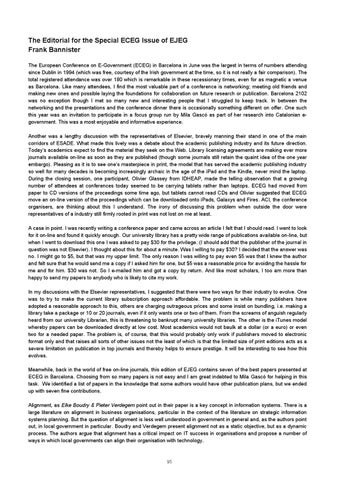 The Editorial for the Special ECEG Issue of EJEG Frank Bannister The European Conference on E-Government (ECEG) in Barcelona in June was the largest in terms of numbers attending since Dublin in 1994 (which was free, courtesy of the Irish government at the time, so it is not really a fair comparison). The total registered attendance was over 180 which is remarkable in these recessionary times, even for as magnetic a venue as Barcelona. Like many attendees, I find the most valuable part of a conference is networking; meeting old friends and making new ones and possible laying the foundations for collaboration on future research or publication. Barcelona 2102 was no exception though I met so many new and interesting people that I struggled to keep track. In between the networking and the presentations and the conference dinner there is occasionally something different on offer. One such this year was an invitation to participate in a focus group run by Mila Gascó as part of her research into Catalonian egovernment. This was a most enjoyable and informative experience. Another was a lengthy discussion with the representatives of Elsevier, bravely manning their stand in one of the main corridors of ESADE. What made this lively was a debate about the academic publishing industry and its future direction. Today’s academics expect to find the material they seek on the Web. Library licensing agreements are making ever more journals available on-line as soon as they are published (though some journals still retain the quaint idea of the one year embargo). Pleasing as it is to see one’s masterpiece in print, the model that has served the academic publishing industry so well for many decades is becoming increasingly archaic in the age of the iPad and the Kindle, never mind the laptop. During the closing session, one participant, Olivier Glassey from IDHEAP, made the telling observation that a growing number of attendees at conferences today seemed to be carrying tablets rather than laptops. ECEG had moved from paper to CD versions of the proceedings some time ago, but tablets cannot read CDs and Olivier suggested that ECEG move an on-line version of the proceedings which can be downloaded onto iPads, Galaxys and Fires. ACI, the conference organisers, are thinking about this I understand. The irony of discussing this problem when outside the door were representatives of a industry still firmly rooted in print was not lost on me at least. A case in point. I was recently writing a conference paper and came across an article I felt that I should read. I went to look for it on-line and found it quickly enough. Our university library has a pretty wide range of publications available on-line, but when I went to download this one I was asked to pay $30 for the privilege. (I should add that the publisher of the journal in question was not Elsevier). I thought about this for about a minute. Was I willing to pay $30? I decided that the answer was no. I might go to $5, but that was my upper limit. The only reason I was willing to pay even $5 was that I knew the author and felt sure that he would send me a copy if I asked him for one, but $5 was a reasonable price for avoiding the hassle for me and for him. $30 was not. So I e-mailed him and got a copy by return. And like most scholars, I too am more than happy to send my papers to anybody who is likely to cite my work. In my discussions with the Elsevier representatives, I suggested that there were two ways for their industry to evolve. One was to try to make the current library subscription approach affordable. The problem is while many publishers have adopted a reasonable approach to this, others are charging outrageous prices and some insist on bundling, i.e. making a library take a package or 10 or 20 journals, even if it only wants one or two of them. From the screams of anguish regularly heard from our university Librarian, this is threatening to bankrupt many university libraries. The other is the iTunes model whereby papers can be downloaded directly at low cost. Most academics would not baulk at a dollar (or a euro) or even two for a needed paper. The problem is, of course, that this would probably only work if publishers moved to electronic format only and that raises all sorts of other issues not the least of which is that the limited size of print editions acts as a severe limitation on publication in top journals and thereby helps to ensure prestige. It will be interesting to see how this evolves. Meanwhile, back in the world of free on-line journals, this edition of EJEG contains seven of the best papers presented at ECEG in Barcelona. Choosing from so many papers is not easy and I am great indebted to Mila Gascó for helping in this task. We identified a list of papers in the knowledge that some authors would have other publication plans, but we ended up with seven fine contributions. Alignment, as Elke Boudry & Pieter Verdegem point out in their paper is a key concept in information systems. There is a large literature on alignment in business organisations, particular in the context of the literature on strategic information systems planning. But the question of alignment is less well understood in government in general and, as the authors point out, in local government in particular. Boudry and Verdegem present alignment not as a static objective, but as a dynamic process. The authors argue that alignment has a critical impact on IT success in organisations and propose a number of ways in which local governments can align their organisation with technology.

Juan Carlos Barahona’s presentation on disruptive innovation and national e-procurement was one of the papers that I heard presented in Barcelona. The author suggests that globally e-procurement has not yet lived up to its promise with relatively little achievement to show for all the hyperbole so far. He suggests that one way of addressing this problem would be to consider e-procurement as disruptive and to consider the wider implications of this disruption. Starting from this idea, he asks what should be the design criteria for such a system, i.e. criteria that are likely to lead to a successful public e-procurement strategy? Not the least of the interesting features of this paper is a wide ranging review of the literature on this topic. Ashtarout Nu’man considers the contentious topic of e-voting and proposes a framework for its adoption in Jordan. The model he proposes is a rich one which takes into account a wide range of factors from the digital divide to auditability. From this he develops what he calls a trust in e-voting (TEV) construct assessing the impact of various factor on citizen trust of e-voting systems. His finding are also rich, the first being that meeting users’ expectations is the most important factor in trust in electronic voting, a finding that echoes that of the influence of perceived usefulness in the Technology Acceptance Model. Although, as Nu’man points out, this research was done for the specific circumstances in Jordan, the model and ideas would be easily adapted to other countries and voting systems. Data mining has become a weapon of choice in business in the last decade or so. Data mining is also used by government, for example many revenue authorities are now using mining for detecting tax fraud, but perhaps not as extensively as it now is in business. Gözde Bakırlı, Derya Birant, Erol Mutlu, Alp Kut, Levent Denktaş and Dilşah Çetin examine it potential use in Turkish local authorities. The authors propose an almost intimidating list of possible applications from the analysis of electricity consumption to the analysis of water notices. The authors propose a services orientated architecture to support this activity, but not the least of the points of interest in this paper is range of possibly applications of data mining in local government that they indentify. There are so many creative ideas in this paper that a short description cannot convey them. You have to read paper for yourself. A quite different, and equally engaging, paper is that by Brian Cleland, Maurice Mulvenna, Brendan Galbraith, Jonathan Wallace and Suzanne Martin. In their paper, the authors consider the thorny problem of e-participation using Living Labs, a concept first developed in MIT. In addition to a discussion of the literature on this topic and on Open Innovation and in particular the ideas of Chesbrough who proposed the concept of an open innovation intermediary, the authors describe the PARTERRE project which includes a number of e-participation pilots carried out in Northern Ireland. The papers contains many useful insights taken from a society which has had its problems over the past 40 years. e-Participation is, as the authors note, still maturing as a research field. This paper is a valuable contribution to this field. At the other end of Europe, Polyxeni Vassilakopoulou, Vassilis Tsagkas and Nicolas Marmaras explore the use of technology in the state healthcare system in Greece in the form of the Greek ePrescription initiative. This initiative was introduced in early 2011 with the objectives of, inter alia, controlling ever increasing medication costs and improving public safety. This study focuses on a key stakeholder group in this system, namely the pharmacists and at the way ‘workarounds’ are used to circumvent restrictions imposed (appropriately or inappropriately) by the system. The authors argues that in many cases workarounds emerge as a result of technology/task incongruence’s and proceed to explore three of these and the impact of such workarounds on re-design of the system. This paper provides a new and different way of thinking about this phenomenon which has potential applications well beyond healthcare. Open data has become a hot topic in e-government, driven in part by some governments, notably the government of the USA. The theory is simple. Governments hold vast amounts of data that could be harnassed by citizens and corporates to do useful things. In their paper, Anneke Zuiderwijk, Marijn Janssen, Sunil Choenni, Ronald Meijer, Roexsana and Sheikh Alibaks look at some of the social impediments to open data and found no less than 188 of them which they categorize into ten types. One of the strong features of this paper is the extensive literature review (which alone would make this worth publishing). The latter will provide a useful reference point for many future authors on this subject one feels. Again, there is so much in this paper that a meaningful summary is not practical. As the authors comment in their conclusion, the potential value of open data is enormous, but the day when all government/public data will be open, easily accessible, understandable and free is still distant. A more general conclusion might be that from concept to practice is often a longer journey than is first thought. Talking of which, there is great food for thought in all of these papers. I hope you enjoy reading them as much as I have.