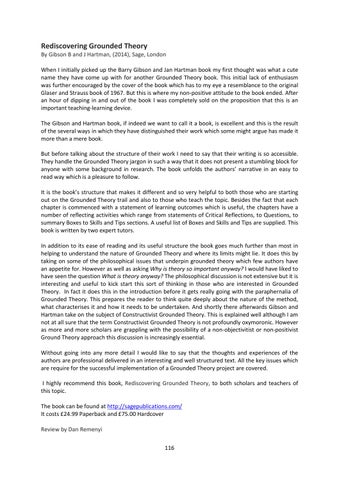 By Gibson B and J Hartman, (2014), Sage, London When I initially picked up the Barry Gibson and Jan Hartman book my first thought was what a cute name they have come up with for another Grounded Theory book. This initial lack of enthusiasm was further encouraged by the cover of the book which has to my eye a resemblance to the original Glaser and Strauss book of 1967. But this is where my non-positive attitude to the book ended. After an hour of dipping in and out of the book I was completely sold on the proposition that this is an important teaching-learning device. The Gibson and Hartman book, if indeed we want to call it a book, is excellent and this is the result of the several ways in which they have distinguished their work which some might argue has made it more than a mere book. But before talking about the structure of their work I need to say that their writing is so accessible. They handle the Grounded Theory jargon in such a way that it does not present a stumbling block for anyone with some background in research. The book unfolds the authors’ narrative in an easy to read way which is a pleasure to follow. It is the book’s structure that makes it different and so very helpful to both those who are starting out on the Grounded Theory trail and also to those who teach the topic. Besides the fact that each chapter is commenced with a statement of learning outcomes which is useful, the chapters have a number of reflecting activities which range from statements of Critical Reflections, to Questions, to summary Boxes to Skills and Tips sections. A useful list of Boxes and Skills and Tips are supplied. This book is written by two expert tutors. In addition to its ease of reading and its useful structure the book goes much further than most in helping to understand the nature of Grounded Theory and where its limits might lie. It does this by taking on some of the philosophical issues that underpin grounded theory which few authors have an appetite for. However as well as asking Why is theory so important anyway? I would have liked to have seen the question What is theory anyway? The philosophical discussion is not extensive but it is interesting and useful to kick start this sort of thinking in those who are interested in Grounded Theory. In fact it does this in the introduction before it gets really going with the paraphernalia of Grounded Theory. This prepares the reader to think quite deeply about the nature of the method, what characterises it and how it needs to be undertaken. And shortly there afterwards Gibson and Hartman take on the subject of Constructivist Grounded Theory. This is explained well although I am not at all sure that the term Constructivist Grounded Theory is not profoundly oxymoronic. However as more and more scholars are grappling with the possibility of a non-objectivitist or non-positivist Ground Theory approach this discussion is increasingly essential. Without going into any more detail I would like to say that the thoughts and experiences of the authors are professional delivered in an interesting and well structured text. All the key issues which are require for the successful implementation of a Grounded Theory project are covered. I highly recommend this book, Rediscovering Grounded Theory, to both scholars and teachers of this topic. The book can be found at http://sagepublications.com/ It costs £24.99 Paperback and £75.00 Hardcover Review by Dan Remenyi 116