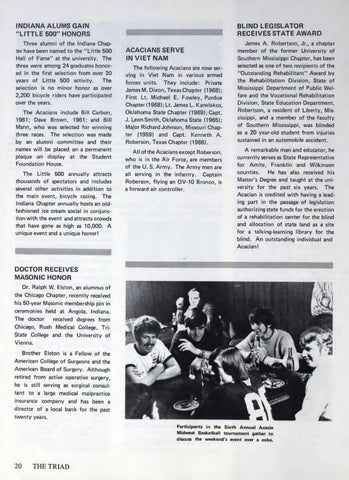 INDIANA ALUMS GAIN &quot;LITTLE 500&quot; HONORS Th ree alumni of the Indiana Chapter have been named to the &quot; Little 500 Hall of Fame&quot; at the university . The three were among 24 graduates honored in the first selection from over 20 years of Little 500 activity. The selection is no minor honor as over 2,200 bicycle riders have participated over the years. The Acacians include Bill Carbon, 1961; Dave Brown, 1961; and Bill Mann, who was selected for winning three races. The selection was made by an alumni committee and their names will be placed on a permanent plaque on display at the Student Foundation House. The Little 500 annually attracts thousands of spectators and includes several other activities in addition to the main event, bicycle racing. The Indiana Chapter annually hosts an oldfashioned ice cream social in conjunction with the event and attracts crowds that have gone as high as 10,000. A unique event and a unique honor!

James A. Robertson, Jr., a chapter member of the former University of Southern Mississippi Chapter, has been selected as one of two recipients of the &quot;Outstanding Rehabilitant&quot; Award by the Rehabilitation Division, State of Mississippi Depa rtment of Public Wel fare and the Vocational Rehabilitation Division, State Education Department. Robertson, a resident of Liberty, Mississippi, and a member of the faculty of Southern Mississippi, was blinded as a 20 year-old student from injuries sustained in an automobile accident. A remarkable man and educator, he currently serves as State Representative for Amite, Franklin and Wilkinson counties. He has also received his Master&#39;s Degree and taught at the uni versity for the past six years. The Acacian is credited with having a leading part in the passage of legislation authorizing state funds for the erection of a rehabilitation center for the blind and allocation of state land as a site for a talking-learning library for the blind. An outstanding individual and Acacian!

DOCTOR RECEIVES MASONIC HONOR Dr. Ralph W. Elston, an alumnus of the Chicago Chapter, recently received his 50-year Masonic membership pin in ceremonies held at Angola, Indiana. The doctor received degrees from Chicago, Rush Medical College, TriState College and the University of Vienna. Brother Elston is a Fellow of the American College of Surgeons and the American Board of Surgery. Although retired from active operative surgery, he is still serving as surgical consultant to a large medical malpractice insurance company and has been a director of a local bank for the past twenty years. Participants in the Sixth Annual Acacia Midwest Basketball tournament gather to discuss the weekend&#39;s event over a coke. 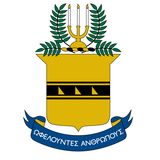