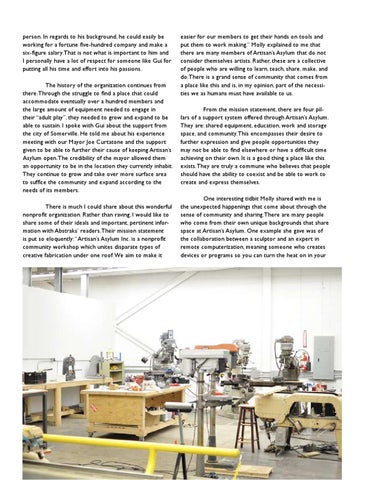 person. In regards to his background, he could easily be working for a fortune five-hundred company and make a six-figure salary. That is not what is important to him and I personally have a lot of respect for someone like Gui for putting all his time and effort into his passions. The history of the organization continues from there. Through the struggle to find a place that could accommodate eventually over a hundred members and the large amount of equipment needed to engage in their “adult play”, they needed to grow and expand to be able to sustain. I spoke with Gui about the support from the city of Somerville. He told me about his experience meeting with our Mayor Joe Curtatone and the support given to be able to further their cause of keeping Artisan’s Asylum open. The credibility of the mayor allowed them an opportunity to be in the location they currently inhabit. They continue to grow and take over more surface area to suffice the community and expand according to the needs of its members. There is much I could share about this wonderful nonprofit organization. Rather than raving, I would like to share some of their ideals and important, pertinent information with Abstraks’ readers. Their mission statement is put so eloquently: “Artisan’s Asylum Inc. is a nonprofit community workshop which unites disparate types of creative fabrication under one roof. We aim to make it

easier for our members to get their hands on tools and put them to work making.” Molly explained to me that there are many members of Artisan’s Asylum that do not consider themselves artists. Rather, these are a collective of people who are willing to learn, teach, share, make, and do. There is a grand sense of community that comes from a place like this and is, in my opinion, part of the necessities we as humans must have available to us. From the mission statement, there are four pillars of a support system offered through Artisan’s Asylum. They are: shared equipment, education, work and storage space, and community. This encompasses their desire to further expression and give people opportunities they may not be able to find elsewhere or have a difficult time achieving on their own. It is a good thing a place like this exists. They are truly a commune who believes that people should have the ability to coexist and be able to work to create and express themselves. One interesting tidbit Molly shared with me is the unexpected happenings that come about through the sense of community and sharing. There are many people who come from their own unique backgrounds that share space at Artisan’s Asylum. One example she gave was of the collaboration between a sculptor and an expert in remote computerization, meaning someone who creates devices or programs so you can turn the heat on in your 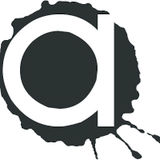