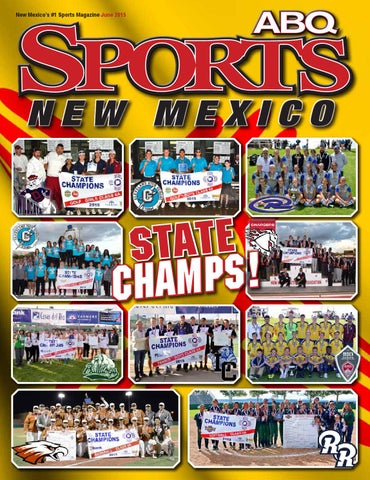 Baseball & softball state championships, as well as a look at State Cup winners - we have coverage of it all.

Alfredo Saenz brings a professional futsal team to our state. They are the New Mexico Roadrunners and games are set to get underway this month - learn how you can view the action.

Boxing and MMA champ Holly Holm will soon be on the big screen. She’s been cast in the Rob Hawk movie “Fight Valley”. The subject? Female fighting, of course. Read more about it, inside. This year’s women’s Boston Marathon winner hails from Santa Fe! We have details on that plus the latest on Rio Rancho phenom Blake Swihart and one of the most decorated soccer coaches in the New Mexico history makes a move to RUSH. Those stories, plus much more, in this edition of ABQ Sports!

The lovely Dominique Galloway, who graced our cover in the past, returns as this year’s 6A individual golf champion, details inside.

This Issue we are celebrating the State Championships in a variety of sports. Photo credits : Moji Sports Photography, Carlos Montoya and Bill Flor.

Volcano Vista has risen to the top of the podium in boys track with impressive performance across the board. They are coached by former club team coach & former USATF NM president Shane Cleveland. Over the past 5 years Cleveland has helped develop the finest track & field athletes in the metro area. They all attend different schools now, but their experience with Cleveland at the club level has built a solid basis for success at their respective schools.

a new beginning at

We thank you for investing your time into our magazine. Got any feedback? We appreciate any ideas, suggestions or anything we missed. Please feel to contact us anytime by phone, email, or mail.

ABQ Sports is a monthly magazine dedicated to covering all aspects of the Albuquerque and surrounding communities scene. We accept stories and photos for consideration. Email: carlos@abqsportsmag.com

All contents of this magazine are copyrighted by ABQ Sports Magazine, all rights reserved. Reproduction of any articles, advertisement or material from this issue is forbidden without permission of the publisher.

HOURLY GOLF CLINICS EVERY SATURDAY Juniors 10AM Adults 11AM

includes Equipment if Needed, Range Balls and Professional Instruction of All Aspects of the Golf Game.

LOOKING TO BECOME A MEMBER?

The “Vela’s,” says Haasis, “have more than 50 years of combined coaching experience at the collegiate and club levels, playing experience at top 10 collegiate, professional, and regional or national teams, Jorge was the goalkeeper for the U20 and U23 Guatemala National Teams. Jorge played Futsal when he was 10 years young. Kit and Jorge coach 3 players who were chosen for the US Youth Futsal Futsal I.D. Mountain Region team.”

utsal is widely known as the foot sport youth soccer players play OFF season. Now, thanks to the efforts of Albuquerque Futsal president and Roadrunner owner Alfredo Saenz, this state has its first and only professional futsal team, and tryouts held recently have attracted some of the best local talent. “Sergio Rivas, Presciliano Ruiz and Jaime Hernandez,” says John Haasis, Roadrunners Assistant General Manager.  “I know Sergio Rivas was a standout on Cibola HS Soccer Team. He graduated (in) 2015.” The team is part of Major League Futsal (MLF). The Roadrunners will represent New Mexico in the 2015 MLF Super-Liga. Futsal is the only indoor soccer sanctioned by FIFA (Fédération

new opportunity,” says Saenz. “They (the Vela’s) are the perfect fit, as they have a long standing relationship with both high level soccer and futsal, and the knowledge, background and experience to coach a professional futsal team.”

Saenz has received special regional sanctions from MLFUSA that will allow him to foster the growth and development of professional futsal in the entire northern region of New Mexico unrestricted by franchise boundaries.

“It’s a fast paced, fun, skilled-oriented game that will test the team’s abilities while showcasing the individual player’s and team’s techniques,” says Haasis. “More touches on the ball for each player forces quick decisions and you will see a very nice technical speed of play.”

Haasis says the team is rostering 12-20 players with most within ages 17-25. The season runs June-September with competitions once a month. The first includes six games played June 20 at Saenz’s futsal facility at 3601 Princeton Dr NE in Albuquerque. The Roadrunners will face teams from Arizona and Kansas, including some players from Brazil.

Saenz has brought in some familiar names as coaches. “We are extremely excited to be able to keep the amazing coaching team of Jorge and Kit Vela here in New Mexico with this exciting

Futsal is currently played in more than 100 countries with over 12 million players worldwide. The national championship is in October. For more information visit www.NMRoadrunnersfc.com.

The Life-Giving gift of J.B. Gallegos STAFF REPORT J.B. Gallegos, a long-time high school and UNM sports photographer in the metro area, downplays his recent act of “giving life” to a niece. “I didn’t see this as giving a gift,” Gallegos said. “I had an opportunity to help her.” “Her” is Stephanie Sniff, a 2000 graduate of Rio Rancho High School, active as a flag-twirler for the RRHS marching band “back in the day.” But at age 32, the Seattle resident’s kidneys were failing – working at about 10 percent of their function, Gallegos said. It had been quite a while since he’d seen her, but recalled “she was pale, didn’t have good color—she didn’t look right” when he saw her in Pueblo, Colo., two years ago. “(But) then I didn’t know how serious she was and how she was deteriorating.” Gallegos made the decision to donate one of his kidneys – if he could. By late February of last year, Gallegos qualified to donate a kidney and was accepted as a donor. On January 19 at Swedish Medical Center in Seattle, the transplant was successful. “I saw it as a way to help my family. Family is family,” Gallegos said, hoping others will be inspired to donate organs. Yeah, he came out all right -- and he’s been back on the job, snapping top-notch photos since his life-saving donation.

MIGUEL BARRERAS 2015 RIO RANCHO ATHLETE OF THE YEAR Photo: Marlene Vance This three-sport star is one of the brightest talents to come out of Rio Rancho in recent years. That city’s Sports Advisory Council selected Barreras based on his wealth of achievements: 3-time individual state wrestling champion (weight classes 152, 160 and 182), 3-time team state wrestling champ and member of the history-making inaugural 6A state football champion team. Career wrestling record 41-1, his sole loss being to the #2 ranked senior in the country. Three-time high school national All-American, 2014 National Runner-Up. Those achievements, his 3.4 GPA and charitable works with Special Olympics have earned him a 4-year wrestling scholarship to the University of Central Oklahoma, where he plans to study business.

The man who built the soccer dynasty at the Albuquerque Academy and was instrumental in the founding of the Rio Rapids FC (formerly Rio Vista) has just committed to coaching two teams with the RUSH league. Clinch takes the helm of girls teams U15 RUSH ‘01 and U17 RUSH ‘99. During his 26 years with the Academy he led teams to a career 313 wins and 6 state championships. His Rio teams won 18 State Cups. His players have earned in excess of 2 million in college scholarships. Career highlights: ranked 7th nationwide of best coaches by MaxPreps, 12 district titles, district Coach of the Year, NM State Coach of the Year 8 times, NSCAA (National Soccer Coaches Association of America) State coach of the Year 5 times, Rocky Mountain Coach of the Year 3 times, National Federation of High Schools top 8 finalist for National Coach of the Year. Clinch currently coaches specialized summer clinics at several venues, including Stanford University.

It’s was a sprint to the finish line, and at the end, this Kenyan, who lives and trains in Santa Fe, was first to cross, beating her nearest competitor by just four seconds. The 30-year old Rotich sprinted to victory, winning her first Boston Marathon in 2:24:55.

because no one plays to be last

What a way to end his college career. This Corrales resident and Cibola grad brought home gold for the University of Illinois with a score of 15.125 on the high bar, edging out a talented field of gymnasts from across the nation. His college diploma is also a matter of pride - Maestas says he is proud to be the first college graduate in his family. His collegiate career also includes a national team championship in 2012. Now it’s time to pursue another dream, as he heads to the Olympic training center this summer in hopes of earning a spot on the national team, and eventually, Olympic gold.

VISIT US AT OUR PREMIER LOCATION!

With the purchase of 16oz or more w/ toppings. One per transaction. Can not be shared Expires 07/13/15

This former Rio Rancho star was called to the Big League from his prized prospect position with Pawtucket after Boston Red Sox starters suffered several injuries. The move comes at least a season, and perhaps as much as a year, ahead of Swihart’s anticipated move to the Big League. As press time this 23-year old had played 17 games with 4 runs, had driven in 7 runs and averaged .193. His former Rio Rancho coaches, friends and family have travelled to see Swihart play for the Sox in person.

Holly Holm has long been known for her looks, and well as her athleticism. Now, it’s likely she’ll have a whole new set of fans around the world with the announcement that she has been cast in a new film called “Fight Valley”, what Director of Photography Michael Lucas calls the female version of the Brad Pitt movie, and cult favorite, “Fight Club”. Holm and UFC fighter Miesha Tate will star. “Holly Holm, she’s incredible,” says Lucas in his YouTube announcement, “she could punch a hole through a cinderblock wall. To be able to have a girl like that on set and just know these girls are puttin’ their all for us is going to be really exciting. You know, to me, they are what the new definition of a woman (is).” “Fight Valley” is written and directed by Rob Hawk and tells the story of the sister (Tate) of a dead fighter. In order to find out how and why she died, Tate must build a fighting reputation in order to be invited into the circle. Lucas calls it a place where “women go to settle their differences.” The official website shows a release date of December 7, 2015.

The Gold Rush Rally, an exotic super car tour of the southwest will be coming through Albuquerque on Monday June 8th and will make a stop at Albuquerque Dragway for some drag racing. They have asked everyone to come out to the track for FREE and watch as they take their exotics down the track. Lets pack the track and show that Albuquerque loves fast cars.

Check out coupons at: asph.com

SPECIALISTS No Recovery No Fee!

SOME THINGS WE ALL HAVE IN COMMON. 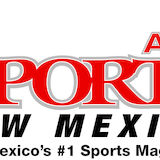