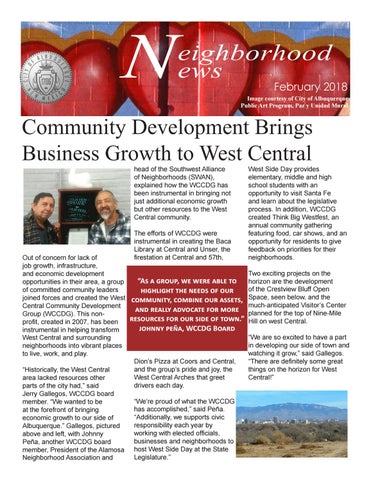 Community Development Brings Business Growth to West Central head of the Southwest Alliance of Neighborhoods (SWAN), explained how the WCCDG has been instrumental in bringing not just additional economic growth but other resources to the West Central community.

Out of concern for lack of job growth, infrastructure, and economic development “As a group, we were able to opportunities in their area, a group of committed community leaders highlight the needs of our joined forces and created the West community, combine our assets, Central Community Development and really advocate for more Group (WCCDG). This nonresources for our side of town.” profit, created in 2007, has been johnny peña, WCCDG Board instrumental in helping transform West Central and surrounding neighborhoods into vibrant places to live, work, and play. Dion’s Pizza at Coors and Central, and the group’s pride and joy, the “Historically, the West Central West Central Arches that greet area lacked resources other drivers each day. parts of the city had,” said Jerry Gallegos, WCCDG board “We’re proud of what the WCCDG member. “We wanted to be has accomplished,” said Peña. at the forefront of bringing “Additionally, we supports civic economic growth to our side of responsibility each year by Albuquerque.” Gallegos, pictured working with elected officials, above and left, with Johnny businesses and neighborhoods to Peña, another WCCDG board member, President of the Alamosa host West Side Day at the State Legislature.” Neighborhood Association and

West Side Day provides elementary, middle and high school students with an opportunity to visit Santa Fe and learn about the legislative process. In addition, WCCDG created Think Big Westfest, an annual community gathering featuring food, car shows, and an opportunity for residents to give feedback on priorities for their neighborhoods. Two exciting projects on the horizon are the development of the Crestview Bluff Open Space, seen below, and the much-anticipated Visitor’s Center planned for the top of Nine-Mile Hill on west Central. “We are so excited to have a part in developing our side of town and watching it grow,” said Gallegos. “There are definitely some great things on the horizon for West Central!”

neighborhood’s Dulcinea Park being a key example. The annual picnic is held at the park, and the neighbors create a sense of community with annual picnics, Halloween and Christmas displays of breathtaking beauty, and simply looking out for one another.

Thomas Village is a small community tucked away in the North Valley, off Rio Grande Boulevard and nestled beside the bosque. It’s a beautiful gem of a neighborhood, and one of the things that makes it unique is the number of homeowner associations (HOA) contained within its neighborhood association (NA).

Another unique characteristic of Thomas Village is that it is the only neighborhood in Albuquerque with direct access to the bosque via a bridge and trail that were built in 1982. The construction was a joint effort of various residents, including board members at that time, plus a concrete span donated by a local construction company, and installation costs partially paid by PNM. This bridge and trail are both very popular with bicyclists and walkers.

“We have three separate HOAs contained within our own association,” said board director Debbie Ridley, pictured above left with TVNA members Dennis Lorenz, Diana Garcia, Richard Meyners, Judith Meyners, Ron Jones (President), and Joan Wierzba. “While working with HOAs presents challenges at times, it also provides opportunities to work with a wider group of neighborhood residents,” Ridley continued. “All of these residents have had a role in making our beautiful neighborhood what it is today.” Thomas Village was formed in the 1970s when Thomas Krupiak Construction & Development Company built three tracts of homes, with a fourth constructed by John Leslie. These home tracts are: Thomas Village, Abbey Jean, The Meadows and Thomas Village Patio homes. One of the most charming aspects of this neighborhood are the many streets whimsically named after characters from Cervantes’ masterpiece Don Quixote, with the Neighborhood News | 2

Thomas Village NA has 110 dues-paying members within a neighborhood of 360 homes. “We’re proud of what our NA does, and we work very hard to keep our neighborhood both beautiful and safe,” said board director Diana Garcia. “It’s due to the efforts of our elected NA board that we have such great resources as our annual picnic, monthly lunches, and our neighborhood contact directory, which is updated constantly and is considered the neighborhood’s top community resource.”

Books To Big Screen Features Daphne DuMaurier and Alfred Hitchcock The Public Library and the Friends for the Public Library are hosting Books to the Big Screen throughout February, featuring book-to-film adaptations at the Kimo Theater, the Juan Tabo Library, and the Special Collections Library. This free monthlong mini film festival will feature the works of legendary author Daphne DuMaurier, whose novels The Birds and Rebecca were notably turned into films by legendary director Alfred Hitchcock. Other DuMaurier books-to-films that will be shown during February include: My Cousin Rachel, Jamaica Inn, and The Scapegoat. All film screenings are free and open to the public. For a complete schedule of film showings, visit: https://abqlibrary.org/bookstobigscreen Book image courtesy of Goodreads

IDO Training Sessions in February The City of Albuquerque wants to help you learn more about the new land use, zoning, and planning regulations that are part of the Integrated Development Ordinance (IDO) before it becomes effective on May 17. There are several opportunities to participate in the IDO training sessions in February. Friday IDO Training Sessions at Plaza del Sol, visit: https://abc-zone.com/event/ido-training-session-friday-0 Community Planning Area (CPA) Training Sessions throughout the city, visit: https://abc-zone.com/events/upcoming For more detailed questions or to dive deeper into the IDO, join staff for a â&#x20AC;&#x153;Study Hallâ&#x20AC;? from 2:30pm - 3:30pm every Friday, Basement Hearing Room of Plaza del Sol. More detailed training sessions on different aspects of the IDO will be scheduled in March and April, and posted on the project event page (see link above).

Question of the Month Question:

What is the difference between using Chief’s Overtime to patrol a neighborhood; using a private security firm; or utilizing a Neighborhood Watch?

The Chief’s Overtime Program, through the Albuquerque Police Department (APD), provides police presence and patrolling in specific neighborhoods and businesses. Police officers volunteer to work additional hours above their regular shifts. They can be employed by individual neighborhoods or by businesses to provide police presence and patrolling. The benefit to this program is that law enforcement officers have the authority to detain or arrest someone in the process of committing a crime; and increased police presence in a neighborhood is a deterrent to crime. The downside to this program is that, since the overtime is paid by the individual neighborhoods or businesses, it is extremely expensive. It also further stretches the staffing resources of APD. To request Chief’s Overtime, call: (505) 768-2380. A private security firm has several benefits, including near-immediate response and the ability to specify an area or street for monitoring and patrolling. The presence of private security can also be a deterrent to possible crime in a neighborhood. The downside of using private security is that private security officers do not have legal authority to make arrests if they catch someone in a criminal act. Private security companies can also be extremely expensive. A Neighborhood Watch (NW) Program is a group of citizens who work together to keep an eye on their neighbors, report suspicious or criminal behavior, and generally work to maintain a safe environment for each other. The benefit to this program is that it is free, provides a good community building resource within neighborhoods, and creates a sense of connection. Residents who keep an eye on their neighbors’ houses and report suspicious behavior can be a deterrent to crime. To set up a Neighborhood Watch, call: (505) 244-6644.

The unique needs and resources of each neighborhood will determine which of these options may be right for any particular association.

Citizen Participation Sought for Possible Crime Prevention Meetings The quarterly meetings will allow residents to share what is happening in their areas with APD, to see if there are any trends or similarities in crime patterns across neighborhoods, and help APD pinpoint specific streets and neighborhoods where similar types of activity is happening. It will also allow neighborhoods to share information and communication resources to help combat the criminal activity, and play an active role in community policing alongside law enforcement. The Northwest Area Command of the Albuquerque Police Department (APD) is seeking participation from residents and neighborhood associations regarding potential quarterly meetings to address crime within the Area Command. Criminals often act in specific neighborhoods and perpetrate similar crimes in adjoining neighborhoods; yet these neighborhoods may not always know about this similar activity happening nearby.

Please send your suggestions and input, including neighborhood association affiliation, to: snorris@cabq.gov and pgelabert@cabq.gov To find out if you live within the NW Area Command, visit: www.cabq.gov/police/documents/NW%20Area%20 Command.pdf

ONC Initiatives in 2018 Neighborhood Toolbox We’ve started a neighborhood toolbox on our website featuring short articles on common neighborhood questions. Check this page regularly for articles on topics like: applying for grant funding, working with fellow neighborhood leaders, and effective use of Robert’s Rules of Order for meetings. http://www.cabq.gov/office-of-neighborhoodcoordination/neighborhood-toolbox

or 242-COPS.” These videos can be shared at neighborhood association meetings, and on individual neighborhood websites and social media sites. Future Trainings We plan to offer other trainings in 2018, including a public safety training in the late spring, and a leadership academy in the fall, so check our website regularly, at: cabq.gov/neighborhoods

Video Resources We are putting together videos that will be promoted on our Facebook page and our YouTube channel titled Albuquerque Neighborhoods. Some topics are: “Alternative Disputes Resolution Office: The What, Why, and How of Mediation” and “When to call 911

What Makes Albuquerque Great? No matter where in Albuquerque you live, there are always treasures to be found. Sarah Jones, a resident of Academy Hills Park, shared her favorite things about our city. “Albuquerque is an urban oasis bookended by foothills and volcanoes,” she said. “I love the fact that you can be five minutes from downtown and lost in the bosque. I also love all the great places that connect our diverse community, from the Downtown Grower’s Market to the Railyards Market to Globalquerque. In fact, Globalquerque is my absolute favorite event in town!” Globalquerque is an annual music festival that features world music by unique and avant-garde musicians and artists from across the globe. Often referred to as a “global party,” this world-class event brings together music from such diverse

countries and cultures as Mongolia, Zimbabwe, Israel, Tanzania, the Canary Islands, and of course, many renowned local musical acts. To learn more about this unique event, visit: www.globalquerque.org

Let us know what makes Albuquerque great by e-mailing: onc@cabq.gov and we’ll feature your answer in an upcoming newsletter!