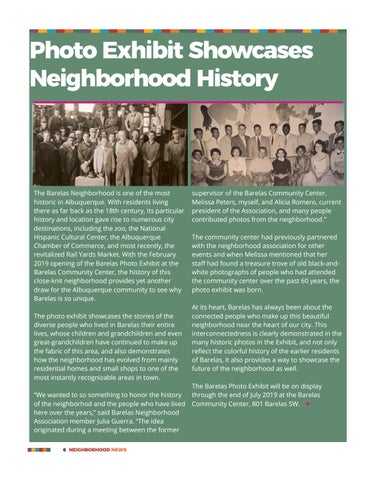 The Barelas Neighborhood is one of the most historic in Albuquerque. With residents living there as far back as the 18th century, its particular history and location gave rise to numerous city destinations, including the zoo, the National Hispanic Cultural Center, the Albuquerque Chamber of Commerce, and most recently, the revitalized Rail Yards Market. With the February 2019 opening of the Barelas Photo Exhibit at the Barelas Community Center, the history of this close-knit neighborhood provides yet another draw for the Albuquerque community to see why Barelas is so unique. The photo exhibit showcases the stories of the diverse people who lived in Barelas their entire lives, whose children and grandchildren and even great-grandchildren have continued to make up the fabric of this area, and also demonstrates how the neighborhood has evolved from mainly residential homes and small shops to one of the most instantly recognizable areas in town. “We wanted to so something to honor the history of the neighborhod and the people who have lived here over the years,” said Barelas Neighborhood Association member Julia Guerra. “The idea originated during a meeting between the former 6 NEIGHBORHOOD NEWS

supervisor of the Barelas Community Center, Melissa Peters, myself, and Alicia Romero, current president of the Association, and many people contributed photos from the neighborhood.” The community center had previously partnered with the neighborhood association for other events and when Melissa mentioned that her staff had found a treasure trove of old black-andwhite photographs of people who had attended the community center over the past 60 years, the photo exhibit was born. At its heart, Barelas has always been about the connected people who make up this beautiful neighborhood near the heart of our city. This interconnectedness is clearly demonstrated in the many historic photos in the Exhibit, and not only reflect the colorful history of the earlier residents of Barelas, it also provides a way to showcase the future of the neighborhood as well. The Barelas Photo Exhibit will be on display through the end of July 2019 at the Barelas Community Center, 801 Barelas SW. •