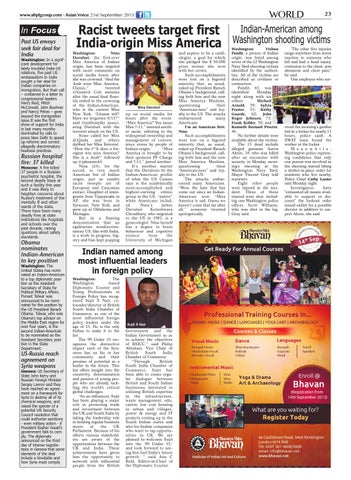 Past US envoys seek fair deal for India

Washington: In a significant development for lately troubled India-US relations, five past US ambassadors to India sought a fair deal for Indian companies on immigration. But their call – contained in a letter to congressional leaders Harry Reid, Mitch McConnell, John Boehner and Nancy Pelosi – goes beyond the immigration issue.It was the first show of support for India in last many months dominated by calls to press New Delhi to speed up reforms and correct allegedly discriminatory business practices.

Moscow: A fire killed 37 people in a Russian psychiatric hospital, the second deadly blaze at such a facility this year and it was likely to heighten concerns about Russia’s treatment of the mentally ill and other wards of the state. There have been many deadly fires at state institutions like hospitals and schools over the past decade, raising questions about safety standards.

Washington: The United States has nominated an Indian-American to a top diplomatic position as the Assistant Secretary of State for Political Military Affairs. Puneet Talwar was announced to be nominated for the position by the US President Barack Obama. Talwar, who was Obama's top advisor on the Middle East region for over four years, is the second Indian-American to be nominated as the Assistant Secretary position in the State Department.

Geneva: US Secretary of State John Kerry and Russian Foreign Minister Sergey Lavrov said they have reached an agreement on a framework for Syria to destroy all of its chemical weapons, and raised the specter of a potential UN Security Council resolution that could authorize sanctions - even military action - if President Bashar Assad's government fails to comply. The diplomats announced on the third day of intense negotiations in Geneva that some elements of the deal include a timetable and how Syria must comply.

Washington: Nina Davuluri, the first-ever Miss America of Indian origin, has been targeted with racist comments on social media hours after she was crowned. “And the Arab wins Miss America. Classic,” tweeted @Granvil Colt minutes after the usual final flourish ended in the crowning of the Indian-American, who is the current Miss New York. “Ummm wtf? Have we forgotten 9/11?” said @anthonytkr, associating Davuluri with the terrorist attack on the US. Some called her Miss al-Qaida and others dubbed her Miss Terrorist. “How the f**k does a foreigner win miss America? She is a Arab!” followed up @jakeamick5. Nina (24), for the record, is very much American but of Indian origin, just as sundry racist tweeple are of European and Caucasian extract. Daughter of immigrants from Vijayawada in AP, she was born in Syracuse, New York, and grew up in Oklahoma and Michigan. But in a flaming demonstration that an egalitarian, nondiscriminatory US, like with India, is a work in progress, bigotry and bias kept popping

up on social media for hours after the event. “Miss America? You mean Miss 7-11,” sneered another racist, referring to the widespread ownership and management of convenience stores by people of Indian-origin. “Miss America is brought to by their sponsors PF Changs and 7-11,” jeered another. It’s another matter that the Davuluris fit the Indian-American profile of what the US Census says is the academically most-accomplished and highest-earning ethnic group in the US, “native” white Americans included. Nina’s father Davuluri Koteshwara Choudhary, who migrated to the US in 1981, is a gynecologist; Nina herself has a degree in brain behaviour and cognitive science from the University of Michigan

Indian named among most influential leaders in foreign policy

Washington: The Washington -based Diplomatic Courier and Young Professionals in Foreign Policy has recognized Sujit S Nair, cofounder/director of British South India Chamber of Commerce, as one of the most influential foreign policy leaders under the age of 33. He is the only Indian to make it to the list. The 99 Under 33 recognizes the distinctive impact each of the honorees has on his or her community and their promise of potential as a leader in the future. This list offers insight into the creativity, determination and passion of young people who are already tackling the world's critical global challenges. “As an influencer, Sujit has been playing a major role in promoting trade and investment between the UK and South India by taking the leadership role in holding regular business meets at the UK Parliament. Because of his efforts various stakeholders are aware of the opportunities between the UK and India. These achievements have given him the opportunity to network with influential people from the British

Government and the Indian Government so as to achieve the objectives of BSICC,” said Philip Abraham, Vice Chair of British South India Chamber of Commerce. “Through British South India Chamber of Commerce, Sujit has been able to create regular dialogue between British and South Indian businesses interested in utilising British expertise in the infrastructure, waste management, education, low cost housing in urban and villages, power & energy and IT projects coming up in the South Indian states and also for Indian companies who want to tap opportunities in UK. We are pleased to welcome Sujit into the ‘99 Under 33,’ and look forward to seeing him fuel India's future growth. ” said Ana C Rold, Editor-in-Chief of the Diplomatic Courier.

Washington: Vishnu Pandit, a person of Indian origin, was listed among seven of the 12 Washington Navy Yard shooting victims identified by the authorities. All of the victims are described as civilians or contractors. Pandit, 61, was identified Monday night along with six others: Michael Arnold, 59; Sylvia Frasier, 53; Kathy Gaarde, 62; John Roger Johnson, 73; Frank Kohler, 50; and Kenneth Bernard Proctor, 46. No further details were available about the victims. The 13 dead include alleged gunman Aaron Alexis, 34, who was killed after an encounter with security in Monday morning's shooting at the Washington Navy Yard, Mayor Vincent Gray told reporters. Eight other people were injured in the incident. Three of those injured were shot, including one Washington police officer, Scott Williams, who was shot in the leg, Gray said.

"The other five injuries range anywhere from stress reaction to someone who fell and had a head injury, contusion to the chest, arm abrasions and chest pain," he said. One employee who sur-

vived the morning's gunfire hid in a locker for nearly 11 hours, police saidt. A SWAT team found the worker in the locker. M e a n w h i l e , Washington police expressing confidence that only one person was involved in the shooting started lifting a shelter-in-place order for residents who live nearby, Police Chief Cathy Lanier said Monday night. Investigators have "exhausted all means available to support or discount" the lookout order issued earlier for a possible shooter in addition to suspect Alexis, she said.