College. How do we measure success? 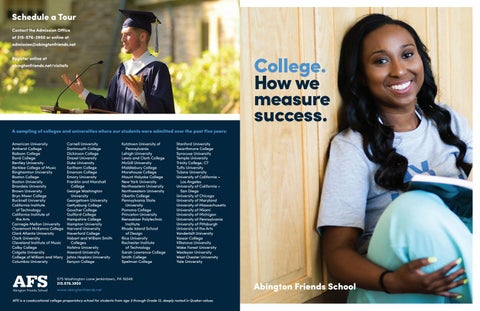 Schedule a Tour Contact the Admission Office at 215-576-3950 or online at admission@abingtonfriends.net

College. How we measure success.

We advocate for students. Personal attention is a hallmark of college guidance at AFS. Because we know our students so well, and we know the path they have taken through high school, we can effectively advocate for each student with college admissions officers.

“ Our ultimate goal is an individual fit that suits the academic profile, financial needs and social goals that the students and their families have identified. We

don’t feel that we’ve found a good fit until all three of those are satisfied. Director of College Guidance

of AFS graduates maintain a B average or higher in college, compared to 42% of their peers.

When Loghan Thain visited Stanford University, he borrowed a bicycle after dinner and set off on his own to explore the campus. His curiosity led him from one building to another, pedaling down whatever path opened up in front of him. “I really got lost on the campus. There were so many things I just couldn’t miss,” he said. Despite losing his bearings, Loghan had found what he wanted in a college. “After my visit, I said, ‘This is a place I can see myself’.” The Director of College Guidance helped open Loghan’s eyes to consider an education on the West Coast. “I talked to the Director of College Guidance about how conflicted I was and she mentioned something I hadn’t considered. I’m an East Coast guy. But Stanford offered a chance to see a whole different part of the country.”

Loghan is studying economics and mechanical engineering at Stanford.

Relationships matter. At AFS, college guidance counselors spend a great deal of time with college admissions representatives, developing relationships that allow us to speak on behalf of our students, reiterating the strengths of our applicants and how we envision their fit with the college’s mission, community and applicant pool.

“ People ask what distinguishes the AFS College Guidance office. I tell them we develop relationships with the colleges and our students. We are able to

Large or Small School? Anne Silbaugh applied via the regular-decision process to seven colleges, eschewing the early decision or early action path that some fellow seniors had chosen. “I totally didn’t know what I wanted,” she said. Large school or small? A city campus or some place quieter? She wasn’t sure. Anne said that the Associate Director of College Guidance at AFS was especially helpful in drawing up a list of colleges to consider. Three front runners finally emerged — Bowdoin College, Connecticut College and Carnegie Mellon University. “I was on the fence about CMU,” before visiting the campus, Anne said. “I was talking to my mom and I told her CMU would have to ‘wow’ me to get me to go there. They did. It really felt right.”

Anne is studying physics and math at Carnegie Mellon University.

of AFS graduates receive an academic or athletic scholarship.

of AFS graduates will remain at their original college through graduation, compared to 40% of their peers.

The small school advantage. At Abington Friends School, our personal, thoughtful and laborintensive approach to college guidance is made possible by our size and the importance we place on knowing our students well.

“ There is no school that will prepare you better for what

is to come. I definitely had a leg up on other students. Abington Friends School Alumnus

of AFS graduates have been recognized for academic or extracurricular activities while at college.

Say yes to Harvard? For Eli Russell, who earned a perfect score on his SATs and founded the award-winning National History Day team at AFS, the list of possible colleges included many of the nation’s top-tier universities. Eli applied via the early-action process to Yale, but his application was deferred to the regular admission round. After applying to 12 other colleges he was admitted to nine colleges, but not to Yale. He narrowed his choice to five, and then finally to just Harvard and Brown. “I knew it would be hard to say no to Harvard,” Eli said, but he worried about a culture of exclusivity and the selectivity of certain organizations on campus. He found himself weighing questions that went way beyond academics. “If I’m on a quest to be a compassionate person,” he asked himself, “will it be helped or hindered at this school?” A visit to Harvard helped seal the deal. “I sat in on an improv class and by the end of it I felt comfortable enough to jump into a scene!” Eli said.

Eli is pursuing his twin passions — history and theatre ­— at Harvard.

First choice, an HBCU! Chelsea Alexander was at school when she learned from her brother that she had been admitted to Hampton University and she could barely contain her excitement. “I ran in the hallway, a couple of laps. I was excited!” she said, breaking into a big smile. Chelsea said she hadn’t considered Hampton until the College Guidance Office suggested that she put it on her list. Now, Chelsea, who is planning a double major in sociology and political science, is thrilled to be going there. “I knew from the very beginning I wanted to go to an HBCU” — Historically Black Colleges and Universities — she said, “because I wanted to be surrounded by black excellence and to attend a university where I know my voice would continue to matter.” On her second visit to Hampton, she noticed that people were gravitating toward her. “I felt instantly like I belonged,” she said. “It made me feel welcomed.”

Chelsea is pursuing a double major in sociology and political science at Hampton University.

College. How do we measure success?

At AFS, college guidance counselors spend a great deal of time with college admissions representatives, developing relationships that allow us to speak on behalf of our students, reiterating the strengths of our applicants and how we envision their fit with the college’s mission, community and applicant pool. 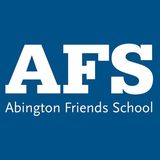