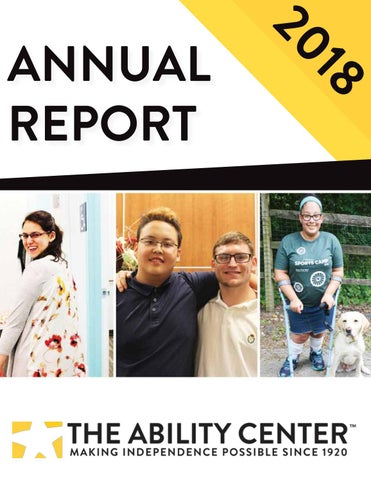 What would it take for the Toledo area to be named the most disability-friendly community in the country? The Ability Center posed this question to the community in the hopes of engaging local conversation around disability and fostering change. The Disability Dialog campaign has sparked powerful discussions between many sectors: religious affiliations, civic groups, businesses, and public officials. Information collected on the campaign’s website, disabilitydialog.com, will shape our strategic plan. These initiatives will impact generations of people with and without disabilities for years to come. Planning is underway for our Centennial celebration in 2020. We are looking ahead to the future while honoring our agency’s roots. Events will be hosted throughout the year to highlight our rich history of service, evolution as an agency, and our role in creating a disability-friendly community in the region. 2018 brought new collaborative partnerships including a relationship with Agility Angels, a local dog training program for individuals living with autism. Program participants benefit from socialization and camaraderie from working with dogs as they maneuver agility courses. Fundraising efforts are underway for a new state-of-theart training facility to be shared by Agility Angels and our Assistance Dogs for Achieving Independence (ADAI) program. Program data continues to showcase effectiveness and meaningful outcomes. Our supporters can feel confident knowing our programming is effective, non-duplicative, and consumer-centered. Countless notes and voicemails of gratitude from consumers are proof that our mission is being fulfilled. Our staff’s care and attention to detail is being noticed by those we serve. Thank you for following along on our journey; we can’t wait to share what’s next. Tim Harrington, Exective Director

PREVENTION IS POWER “I appreciate all that you have done for me to get home.” ROBERT MOODY, 82 At first glance, our services in transitioning people from facilities to community-based living may seem like just a physical relocation of residence. But the bigger picture of The Ability Center’s Community Living Program is felt by people who can continue to live in the home they have worked their whole life to pay off. It is found in the moments spent cooking in the kitchen with grandchildren. It is experienced through feelings of safety and security in the home. Our comprehensive approach to transition begins with the person’s greatest needs in mind. Equipped with connections to home care agencies, access to durable medical equipment, and capability to construct home modifications, our dedicated staff members take time to do more than check boxes, we build relationships.

TRANSITION Staff members act as transition coordinators working along with rehabilitation facilities to ensure a safe discharge. We assist in securing accessible and affordable housing, purchasing needed household items, and creating a safe environment to live.

PREVENTION The structure of our programs actively prevents people from living in institutions. Home modifications and medical equipment enhance access and increase maneuverability for people at home. Our work doesn’t end when the keys are handed over. Staff continue to engage with individuals to be safe, active, and involved members of their community.

Because of The Ability Center...

10,682 Calls taken by Ability Center staff regarding disability topics. Through our referral network, we connect people to resources to ensure needs are addressed.

"Meyer gives me unconditional love and he never judges me. He gives me confidence to go out in the community."

Dog partnerships successful and active in the community

All financial contributions directly benefit designated programs of The Ability Center. Administrative costs are fully covered by our endowment.

THE ABILITY CENTER BOARD OF DIRECTORS 2018 Tom McArdle Retired, Cubbon and Associates