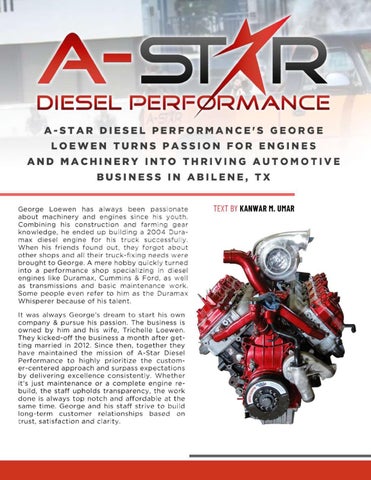 A-STAR DIESEL PERFORMANCE'S GEORGE LOEWEN TURNS PASSION FOR ENGINES AND MACHINERY INTO THRIVING AUTOMOTIVE BUSINESS IN ABILENE, TX George Loewen has always been passionate about machinery and engines since his youth. Combining his construction and farming gear knowledge, he ended up building a 2004 Duramax diesel engine for his truck successfully. When his friends found out, they forgot about other shops and all their truck-ﬁxing needs were brought to George. A mere hobby quickly turned into a performance shop specializing in diesel engines like Duramax, Cummins & Ford, as well as transmissions and basic maintenance work. Some people even refer to him as the Duramax Whisperer because of his talent. It was always George’s dream to start his own company & pursue his passion. The business is owned by him and his wife, Trichelle Loewen. They kicked-oﬀ the business a month after getting married in 2012. Since then, together they have maintained the mission of A-Star Diesel Performance to highly prioritize the customer-centered approach and surpass expectations by delivering excellence consistently. Whether it’s just maintenance or a complete engine rebuild, the staﬀ upholds transparency, the work done is always top notch and aﬀordable at the same time. George and his staﬀ strive to build long-term customer relationships based on trust, satisfaction and clarity. 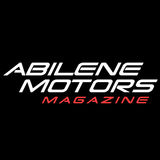 Abilene Motors Magazine is the automotive magazine of Abilene, Texas. With a focus on local people at local places, showcasing the vehicles...

Abilene Motors Magazine is the automotive magazine of Abilene, Texas. With a focus on local people at local places, showcasing the vehicles...