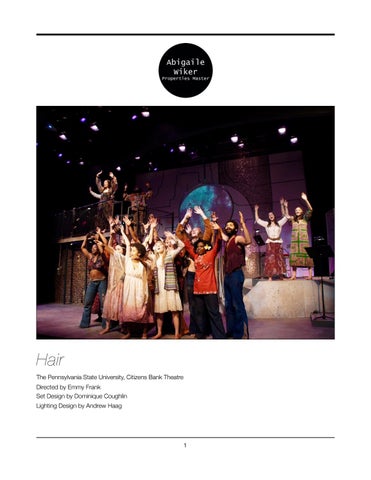 &quot;Hair&quot; was my first production as a properties master and was a valuable learning experience that I was able to expand my knowledge and grow from. Working with a props list with of over 55 props, 150 paper props, and 240 consumable props, I was given a budget of $180. I was able to pull and build the majority of the props from Penn State&#39;s prop shop. I did come in on budget by researching and testing the best ways to make the consumable props and paper props. The big purchases were buying supplies for the joints which consisted of sage and mint. 240 joints were used throughout the whole run of the shows. Also providing lighter fluid and flints for the 6 lighters on stage was a reoccurring purchase. Most of the props were paper props and small hand props. Because this show is a period show, all paper props had to be accurate. The draft notices, draft cards, and newspapers were all researched in order to ensure they were correct to the time. The largest prop was the Lady Liberty hand. This prop was nearly 5 feet tall and 3 feet wide. It was on wheels and had fake flames attached to the front to hide the character Jeanie during the song &quot;Air&quot;. During the 8 weeks of production I had 4 running lists. A detailed prop list, a narrowed down prop list for the props artist to refer to, a prop list for the assistant stage manager with detailed notes of changes and how the prop was able to be used, and a calendar to make sure the prop shop was staying on track. Additionally, I had two research binders, one that remained in the shop with the updated lists for the props artists to see each day and one that remained with me at all times. During this time I was spending a minimum of 20 hours a week in the shop and about 5-10 hours outside that time for research, planning, and meetings each week. This production gave me more insight on the logistics behind being a props master. I thoroughly enjoyed all aspects of the process.

The protesting posters were a huge part of this production as they were onstage the most out of any other prop. After doing historical research from this time period, I was able to gather 19 different messages to write on the posters. Each message was made for that particular character. The goal was to create a variety of handwriting, sizes of posters, and colors. Research images of the posters showed they were simple designs, but for this production the director, designer, and I discussed making them more theatrical and colorful to better fit with the costumes and the set.

LADY LIBERTY &amp; GAS MASK For our production, Jeanie’s entrance onstage in the song “Air”, used the largest prop in this show. In our props storage we had the Lady Liberty hand, as shown to the right. With the help of the director and designer, we were able to come up with the idea that Jeanie would enter inside of the Lady Liberty hand, hiding behind theatrical fake flames, she would pop up, and take off a bong gas mask. She was wheeled around on stage for the entire song and at the end stood up to reveal her pregnant belly. The flames were craved from foam and sewn and glued to foam padding which was placed inside. The bong gas mask was created from a military gas mask as the base with a glass bottle that was found in the shop. The actress held a vape in her hand, inhaled it, placed the mask over her face, sat up, took off the mask, and released a breathe of smoke.

BURNING OF THE DRAFT CARDS For the burning of the draft cards, we decided to use a large beat up trash can, which was covered in paint and dirt. The original plan was to use a smaller coffee can as that was what was mainly used to burn draft cards in the late 1960â&amp;#x20AC;&amp;#x2122;s, but because the actors had difficulty fitting the cards in the can, the large trash can was switched in. Inside of the trash can were LED lights covered with red and orange lighting gels that flickered to give off a fire effect. The draft cards were thoroughly researched and because draft cards changed many times over the years, the proper draft card during this time is as show below. They were folded in half making them about the size of an index card. Each draft card had the actors names on it.

The dreamcatcher had hand dyed ribbons ranging from blues and oranges hanging from it. Each ribbon was tied to the chain link fencing on the main part of the dreamcatcher. Static spray had to be used on these ribbons every two days in order to keep the ribbons hanging properly and to keep them from clinging to actorsâ&amp;#x20AC;&amp;#x2122; costumes.

The designerâ&amp;#x20AC;&amp;#x2122;s model of the dreamcatcher was used(as seen above), but after seeing the colors of ribbon, more orange was used then navy blue. To give them more texture, fishing bobbins were spray painted blue and added hooked onto ribbons in various areas. .

SET DRESSING   At the opening of the show the actors came out and place flowers in the mesh material and the chain link fencing to make the set “their home”. Mason jars wrapped with hemp were placed in two locations on the set. Three ash trays were located in various areas onstage to allow actors to put out their joints safely.

ARMED FORCES BANNER This banner was brought out for the last scene, it was made from canvas material. A stencil was cut out and painted, and grommets were added with rope and an s-hook at the ends.

CAMERA &amp; PURSE   The camera used by the character Hubert, was a vintage 1960’s camera. Although it no longer worked, a battery operated flash was added to allow for the flash to go off.

CHAIR, NEWSPAPER, IRON, IRONING BOARD, SHIRT A 1960’s iron was used and the ironing board was covered in a pale 1960’s pattern.

JOINTS &amp; BONG After getting the fire permits passed to use lighters onstage, 240 total joints were rolled for the two week run and for tech week. Sage and mint was the cheapest and best option to be smoked as it was the best for the actors’ throats.

A water bong was used in the production. Having not enough money to buy a new one, we had one in the prop storage. It was painted to have a 1960’s pattern. Sage and mint were smoked and the actors were able to successful light it and smoke from the bong.

35 “Be-IN” Flyers were made for the actors to hand out to the audiences for each show. They were printed on four different colors and were 4&quot; x 5.5”.

LIBRARY CARDS &amp; FLOWER SEEDS 35 library tickets were printed for the whole run of the production because the character destroyed it each show.

1960’s flower seed labels were created made into small envelopes and buttons were placed inside each to look like flower seeds.

The American Flag was a purchased nylon flag and yellow fringe was sewn around the edges.

PROPS LIST This was the props list I updated and kept for the props artists to see what needed to be completed.

Matches (match boxes) (as many as we have)

Box of joints/box of acid stamps

ARTIST STATEMENT ABIGAILE WIKER (www.abigailewiker.com) plans to complete her BFA in Theatre Set Design with a minor in Architectural Studies at The Pennsylvania State University in May 2018. Originally from Medford Lakes, NJ but she currently resides in State College, PA. Having worked on 22 Penn State Centre Stage productions over the past three years, including scenic designing American Idiot, props master on Hair, props master assistant on Titanic the Musical and Spring Awakening, and paint charge assistant on Be More Chill, she has gained a background in design, props, and paints as well as leadership, organization, budgeting, and communication skills. She will be the scenic designer for Argonautika in the fall of 2017. Abigaile also has completed several design studio assignments with complete research, drafting plans, and a finished model. Some of these shows include Venus, Sylvia, and The Piano Lesson. For her senior year she will be working in the graduate studio on further design, painting, and drawing classes. Other works include the Moorestown Theatre Companyâ&amp;#x20AC;&amp;#x2122;s productions of Lion King Jr., The Little Mermaid, Peter Pan, The Sound of Music Jr., and Mary Poppins. On these productions she was the Costume Assistant and Props Assistant, mainly working as the milliner, dyer, and a costume finisher. In 2016, she was awarded the Oliver Smith Award for Arts and Crafts from Penn State University and became a member of the National Honor Society at the Penn State Chapter. Abigaile has had the privilege of traveling to over 20 countries; many trips were through organizations such as People to People International and Habitat for Humanity. Through these travels, she has volunteered, gained historical and cultural knowledge, and experienced international architecture and arts. Abigaile has grown up surrounded by a family of artists. From fine painters and sculptors to architects, she has been able to learn and inherit some of her familyâ&amp;#x20AC;&amp;#x2122;s design aesthetics.