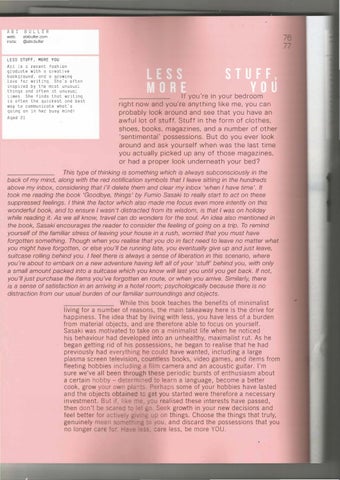 LESS STUFF, MORE YOU Abi is a recent fashion graduate with a creative background, and a growing love for writing. She's often inspired by the most unusual things and often at unusual times. She finds that writing is often the quickest and best way to communicate what's going on in her busy mindl Aged 21

If you're in your bedroom right now and you're anything like me, you can probably look around and see that you have an awful lot of stuff. Stuff in the form of clothes, shoes, books, magazines, and a number of other 'sentimental· possessions. But do you ever look around and ask yourself when was the last time you actually picked up any of those magazines, or had a proper look underneath your bed?

This type of thinking is something which is always subconsciously in the back of my mind, along with the red notification symbols that I leave sitting in the hundreds above my inbox, considering that i'/1 delete them and clear my inbox 'when I have time'. It took me reading the book 'Goodbye, things' by Fumio Sasaki to really start to act on these suppressed feelings. I think the factor which also made me focus even more intently on this wonderful book, and to ensure I wasn't distracted from its wisdom, is that I was on holiday while reading it. As we all know, travel can do wonders for the soul. An idea also mentioned in the book, Sasaki encourages the reader to consider the feeling of going on a trip. To remind yourself of the familiar stress of leaving your house in a rush, worried that you must have forgotten something. T hough when you realise that you do in fact need to leave no matter what you might have forgotten, or else you'll be running late, you eventually give up and just leave, suitcase rolling behind you. I feel there is always a sense of liberation in this scenario, where you're about to embark on a new adventure having left all of your 'stuff' behind you, with only a small amount packed into a suitcase which you know will last you until you get back. If not, you'll just purchase the items you've forgotten en route, or when you arrive. Similarly, there is a sense of satisfaction in an arriving in a hotel room; psychologically because there is no distraction from our usual burden of our familiar surroundings and objects. While this book teaches the benefits of minimalist living for a number of reasons, the main takeaway here is the drive for happiness. The idea that by living with less, you have less of a burden from material objects, and are therefore able to focus on yourself. Sasaki was motivated to take on a minimalist life when he noticed his behaviour had developed into an unhealthy, maximalist rut. As he began getting rid of his possessions, he began to realise that he had previously had everything he could have wanted, including a large plasma screen television, countless books, video games, and items from fleeting hobbies including a f m camera and an acoustic guitar. I'm sure we've all been throJgr trese periodic bursts of enthusiasm about a certain hobby - deterrn·ned to learn a language, become a better cook, grow your own plan•s. Perhaps some of your hobbies have lasted and the objects obtaine� :: get you started were therefore a necessary investment. But f. Ii e ...,,.s _ :ci realised these interests have passed, then don't be scare : s: g ___ Seek growth in your new decisions and feel better for ac: -g � on things. Choose the things that truly, genuinely mean s 6 • __ ou, and discard the possessions that you s:: :are less, be more YOU. no longer care ;�r 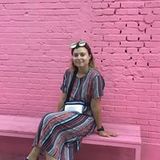