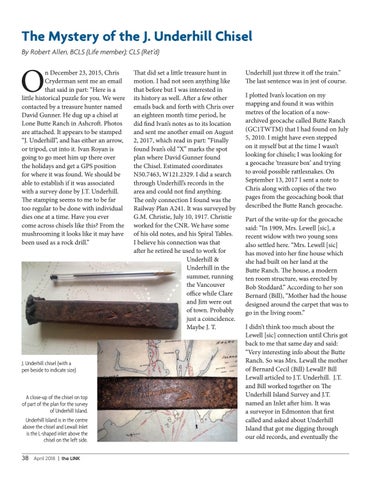 n December 23, 2015, Chris Cryderman sent me an email that said in part: “Here is a little historical puzzle for you. We were contacted by a treasure hunter named David Gunner. He dug up a chisel at Lone Butte Ranch in Ashcroft. Photos are attached. It appears to be stamped “J. Underhill”, and has either an arrow, or tripod, cut into it. Ivan Royan is going to go meet him up there over the holidays and get a GPS position for where it was found. We should be able to establish if it was associated with a survey done by J.T. Underhill. The stamping seems to me to be far too regular to be done with individual dies one at a time. Have you ever come across chisels like this? From the mushrooming it looks like it may have been used as a rock drill.”

J. Underhill chisel (with a pen beside to indicate size)

That did set a little treasure hunt in motion. I had not seen anything like that before but I was interested in its history as well. After a few other emails back and forth with Chris over an eighteen month time period, he did find Ivan’s notes as to its location and sent me another email on August 2, 2017, which read in part: “Finally found Ivan’s old “X” marks the spot plan where David Gunner found the Chisel. Estimated coordinates N50.7463, W121.2329. I did a search through Underhill’s records in the area and could not find anything. The only connection I found was the Railway Plan A241. It was surveyed by G.M. Christie, July 10, 1917. Christie worked for the CNR. We have some of his old notes, and his Spiral Tables. I believe his connection was that after he retired he used to work for Underhill &amp; Underhill in the summer, running the Vancouver office while Clare and Jim were out of town. Probably just a coincidence. Maybe J. T.

Underhill just threw it off the train.” The last sentence was in jest of course. I plotted Ivan’s location on my mapping and found it was within metres of the location of a nowarchived geocache called Butte Ranch (GC1TWTM) that I had found on July 5, 2010. I might have even stepped on it myself but at the time I wasn’t looking for chisels; I was looking for a geocache ‘treasure box’ and trying to avoid possible rattlesnakes. On September 13, 2017 I sent a note to Chris along with copies of the two pages from the geocaching book that described the Butte Ranch geocache. Part of the write-up for the geocache said: “In 1909, Mrs. Lewell [sic], a recent widow with two young sons also settled here. “Mrs. Lewell [sic] has moved into her fine house which she had built on her land at the Butte Ranch. The house, a modern ten room structure, was erected by Bob Stoddard.” According to her son Bernard (Bill), “Mother had the house designed around the carpet that was to go in the living room.” I didn’t think too much about the Lewell [sic] connection until Chris got back to me that same day and said: “Very interesting info about the Butte Ranch. So was Mrs. Lewall the mother of Bernard Cecil (Bill) Lewall? Bill Lewall articled to J.T. Underhill. J.T. and Bill worked together on The Underhill Island Survey and J.T. named an Inlet after him. It was a surveyor in Edmonton that first called and asked about Underhill Island that got me digging through our old records, and eventually the 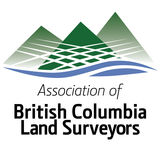