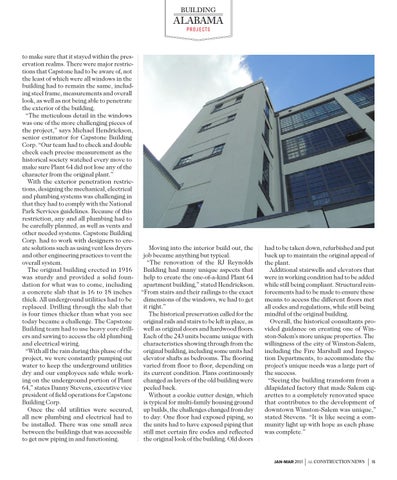 to make sure that it stayed within the preservation realms. There were major restrictions that Capstone had to be aware of, not the least of which were all windows in the building had to remain the same, including steel frame, measurements and overall look, as well as not being able to penetrate the exterior of the building. “The meticulous detail in the windows was one of the more challenging pieces of the project,” says Michael Hendrickson, senior estimator for Capstone Building Corp. “Our team had to check and double check each precise measurement as the historical society watched every move to make sure Plant 64 did not lose any of the character from the original plant.” With the exterior penetration restrictions, designing the mechanical, electrical and plumbing systems was challenging in that they had to comply with the National Park Services guidelines. Because of this restriction, any and all plumbing had to be carefully planned, as well as vents and other needed systems. Capstone Building Corp. had to work with designers to create solutions such as using vent less dryers and other engineering practices to vent the overall system. The original building erected in 1916 was sturdy and provided a solid foundation for what was to come, including a concrete slab that is 16 to 18 inches thick. All underground utilities had to be replaced. Drilling through the slab that is four times thicker than what you see today became a challenge. The Capstone Building team had to use heavy core drillers and sawing to access the old plumbing and electrical wiring. “With all the rain during this phase of the project, we were constantly pumping out water to keep the underground utilities dry and our employees safe while working on the underground portion of Plant 64,” states Danny Stevens, executive vice president of field operations for Capstone Building Corp. Once the old utilities were secured, all new plumbing and electrical had to be installed. There was one small area between the buildings that was accessible to get new piping in and functioning.

Moving into the interior build out, the job became anything but typical. “The renovation of the RJ Reynolds Building had many unique aspects that help to create the one-of-a-kind Plant 64 apartment building,” stated Hendrickson. “From stairs and their railings to the exact dimensions of the windows, we had to get it right.” The historical preservation called for the original rails and stairs to be left in place, as well as original doors and hardwood floors. Each of the 243 units became unique with characteristics showing through from the original building, including some units had elevator shafts as bedrooms. The flooring varied from floor to floor, depending on its current condition. Plans continuously changed as layers of the old building were peeled back. Without a cookie cutter design, which is typical for multi-family housing ground up builds, the challenges changed from day to day. One floor had exposed piping, so the units had to have exposed piping that still met certain fire codes and reflected the original look of the building. Old doors

had to be taken down, refurbished and put back up to maintain the original appeal of the plant. Additional stairwells and elevators that were in working condition had to be added while still being compliant. Structural reinforcements had to be made to ensure these means to access the different floors met all codes and regulations, while still being mindful of the original building. Overall, the historical consultants provided guidance on creating one of Winston-Salem’s more unique properties. The willingness of the city of Winston-Salem, including the Fire Marshall and Inspection Departments, to accommodate the project’s unique needs was a large part of the success. “Seeing the building transform from a dilapidated factory that made Salem cigarettes to a completely renovated space that contributes to the development of downtown Winston-Salem was unique,” stated Stevens. “It is like seeing a community light up with hope as each phase was complete.” 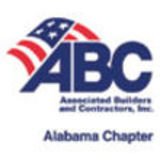