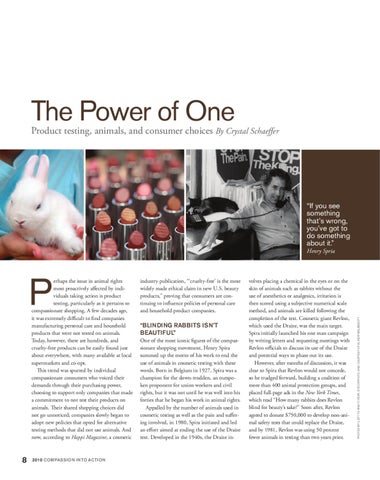 The Power of One

“If you see something that’s wrong, you’ve got to do something about it.”

erhaps the issue in animal rights most proactively affected by individuals taking action is product testing, particularly as it pertains to compassionate shopping. A few decades ago, it was extremely difficult to find companies manufacturing personal care and household products that were not tested on animals. Today, however, there are hundreds, and cruelty-free products can be easily found just about everywhere, with many available at local supermarkets and co-ops. This trend was spurred by individual compassionate consumers who voiced their demands through their purchasing power, choosing to support only companies that made a commitment to not test their products on animals. Their shared shopping choices did not go unnoticed; companies slowly began to adopt new policies that opted for alternative testing methods that did not use animals. And now, according to Happi Magazine, a cosmetic

industry publication, “‘cruelty-free’ is the most widely made ethical claim in new U.S. beauty products,” proving that consumers are continuing to influence policies of personal care and household product companies.

“Blinding rabbits isn’t beautiful” One of the most iconic figures of the compassionate shopping movement, Henry Spira summed up the motto of his work to end the use of animals in cosmetic testing with these words. Born in Belgium in 1927, Spira was a champion for the down-trodden, an outspoken proponent for union workers and civil rights, but it was not until he was well into his forties that he began his work in animal rights. Appalled by the number of animals used in cosmetic testing as well as the pain and suffering involved, in 1980, Spira initiated and led an effort aimed at ending the use of the Draize test. Developed in the 1940s, the Draize in-

volves placing a chemical in the eyes or on the skin of animals such as rabbits without the use of anesthetics or analgesics, irritation is then scored using a subjective numerical scale method, and animals are killed following the completion of the test. Cosmetic giant Revlon, which used the Draize, was the main target. Spira initially launched his one man campaign by writing letters and requesting meetings with Revlon officials to discuss its use of the Draize and potential ways to phase out its use. However, after months of discussion, it was clear to Spira that Revlon would not concede, so he trudged forward, building a coalition of more than 400 animal protection groups, and placed full-page ads in the New York Times, which read “How many rabbits does Revlon blind for beauty’s sake?” Soon after, Revlon agreed to donate $750,000 to develop non-animal safety tests that could replace the Draize, and by 1981, Revlon was using 50 percent fewer animals in testing than two years prior.

photos by (left to right) veer, istockphoto, and courtesy of elinor molbegott