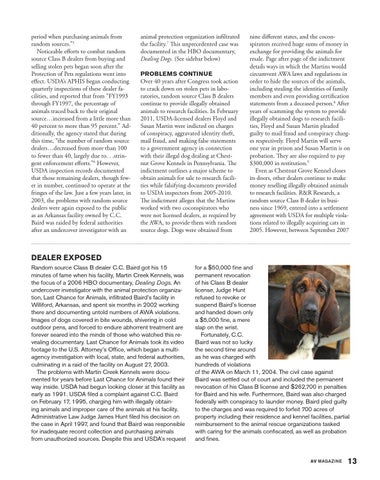 period when purchasing animals from random sources.”5 Noticeable efforts to combat random source Class B dealers from buying and selling stolen pets began soon after the Protection of Pets regulations went into effect. USDA’s APHIS began conducting quarterly inspections of these dealer facilities, and reported that from “FY1993 through FY1997, the percentage of animals traced back to their original source…increased from a little more than 40 percent to more than 95 percent.” Additionally, the agency stated that during this time, “the number of random source dealers…decreased from more than 100 to fewer than 40, largely due to. . .stringent enforcement efforts.”6 However, USDA inspection records documented that those remaining dealers, though fewer in number, continued to operate at the fringes of the law. Just a few years later, in 2003, the problems with random source dealers were again exposed to the public as an Arkansas facility owned by C.C. Baird was raided by federal authorities after an undercover investigator with an

animal protection organization infiltrated the facility.7 This unprecedented case was documented in the HBO documentary, Dealing Dogs. (See sidebar below) PROBLEMS CONTINUE Over 40 years after Congress took action to crack down on stolen pets in laboratories, random source Class B dealers continue to provide illegally obtained animals to research facilities. In February 2011, USDA-licensed dealers Floyd and Susan Martin were indicted on charges of conspiracy, aggravated identity theft, mail fraud, and making false statements to a government agency in connection with their illegal dog dealing at Chestnut Grove Kennels in Pennsylvania. The indictment outlines a major scheme to obtain animals for sale to research facilities while falsifying documents provided to USDA inspectors from 2005-2010. The indictment alleges that the Martins worked with two coconspirators who were not licensed dealers, as required by the AWA, to provide them with random source dogs. Dogs were obtained from

nine different states, and the coconspirators received huge sums of money in exchange for providing the animals for resale. Page after page of the indictment details ways in which the Martins would circumvent AWA laws and regulations in order to hide the sources of the animals, including stealing the identities of family members and even providing certification statements from a deceased person.8 After years of scamming the system to provide illegally obtained dogs to research facilities, Floyd and Susan Martin pleaded guilty to mail fraud and conspiracy charges respectively. Floyd Martin will serve one year in prison and Susan Martin is on probation. They are also required to pay $300,000 in restitution.9 Even as Chestnut Grove Kennel closes its doors, other dealers continue to make money reselling illegally obtained animals to research facilities. R&R Research, a random source Class B dealer in business since 1969, entered into a settlement agreement with USDA for multiple violations related to illegally acquiring cats in 2005. However, between September 2007

DEALER EXPOSED Random source Class B dealer C.C. Baird got his 15 minutes of fame when his facility, Martin Creek Kennels, was the focus of a 2006 HBO documentary, Dealing Dogs. An undercover investigator with the animal protection organization, Last Chance for Animals, infiltrated Baird’s facility in Williford, Arkansas, and spent six months in 2002 working there and documenting untold numbers of AWA violations. Images of dogs covered in bite wounds, shivering in cold outdoor pens, and forced to endure abhorrent treatment are forever seared into the minds of those who watched this revealing documentary. Last Chance for Animals took its video footage to the U.S. Attorney’s Office, which began a multiagency investigation with local, state, and federal authorities, culminating in a raid of the facility on August 27, 2003. The problems with Martin Creek Kennels were documented for years before Last Chance for Animals found their way inside. USDA had begun looking closer at this facility as early as 1991. USDA filed a complaint against C.C. Baird on February 17, 1995, charging him with illegally obtaining animals and improper care of the animals at his facility. Administrative Law Judge James Hunt filed his decision on the case in April 1997, and found that Baird was responsible for inadequate record collection and purchasing animals from unauthorized sources. Despite this and USDA’s request

for a $50,000 fine and permanent revocation of his Class B dealer license, Judge Hunt refused to revoke or suspend Baird’s license and handed down only a $5,000 fine, a mere slap on the wrist. Fortunately, C.C. Baird was not so lucky the second time around as he was charged with hundreds of violations of the AWA on March 11, 2004. The civil case against Baird was settled out of court and included the permanent revocation of his Class B license and $262,700 in penalties for Baird and his wife. Furthermore, Baird was also charged federally with conspiracy to launder money. Baird pled guilty to the charges and was required to forfeit 700 acres of property including their residence and kennel facilities, partial reimbursement to the animal rescue organizations tasked with caring for the animals confiscated, as well as probation and fines.

Lost, Stolen, Surrendered and Sold: How Pets Land in Labs

Lost, Stolen, Surrendered and Sold: How Pets Land in Labs