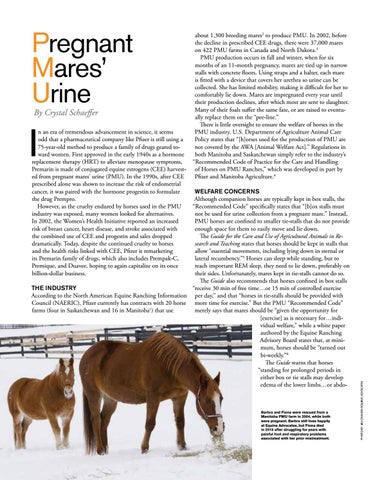 n an era of tremendous advancement in science, it seems odd that a pharmaceutical company like Pfizer is still using a 75-year-old method to produce a family of drugs geared toward women. First approved in the early 1940s as a hormone replacement therapy (HRT) to alleviate menopause symptoms, Premarin is made of conjugated equine estrogens (CEE) harvested from pregnant mares’ urine (PMU). In the 1990s, after CEE prescribed alone was shown to increase the risk of endometrial cancer, it was paired with the hormone progestin to formulate the drug Prempro. However, as the cruelty endured by horses used in the PMU industry was exposed, many women looked for alternatives. In 2002, the Women’s Health Initiative reported an increased risk of breast cancer, heart disease, and stroke associated with the combined use of CEE and progestin and sales dropped dramatically. Today, despite the continued cruelty to horses and the health risks linked with CEE, Pfizer is remarketing its Premarin family of drugs, which also includes Prempak-C, Premique, and Duavee, hoping to again capitalize on its once billion-dollar business.

WELFARE CONCERNS Although companion horses are typically kept in box stalls, the “Recommended Code” specifically states that “[b]ox stalls must not be used for urine collection from a pregnant mare.” Instead, PMU horses are confined to smaller tie-stalls that do not provide enough space for them to easily move and lie down. The Guide for the Care and Use of Agricultural Animals in Research and Teaching states that horses should be kept in stalls that allow “essential movements, including lying down in sternal or lateral recumbency.”5 Horses can sleep while standing, but to reach important REM sleep, they need to lie down, preferably on their sides. Unfortunately, mares kept in tie-stalls cannot do so. The Guide also recommends that horses confined in box stalls “receive 30 min of free time…or 15 min of controlled exercise THE INDUSTRY According to the North American Equine Ranching Information per day,” and that “horses in tie-stalls should be provided with Council (NAERIC), Pfizer currently has contracts with 20 horse more time for exercise.” But the PMU “Recommended Code” merely says that mares should be “given the opportunity for farms (four in Saskatchewan and 16 in Manitoba1) that use [exercise] as is necessary for…individual welfare,” while a white paper authored by the Equine Ranching Advisory Board states that, at minimum, horses should be “turned out bi-weekly.”6  The Guide warns that horses “standing for prolonged periods in either box or tie stalls may develop edema of the lower limbs…or abdo-

Barbra and Fiona were rescued from a Manitoba PMU farm in 2004, while both were pregnant. Barbra still lives happily at Equine Advocates, but Fiona died in 2015 after struggling for years with painful foot and respiratory problems associated with her prior mistreatment.

about 1,300 breeding mares2 to produce PMU. In 2002, before the decline in prescribed CEE drugs, there were 37,000 mares on 422 PMU farms in Canada and North Dakota.3 PMU production occurs in fall and winter, when for six months of an 11-month pregnancy, mares are tied up in narrow stalls with concrete floors. Using straps and a halter, each mare is fitted with a device that covers her urethra so urine can be collected. She has limited mobility, making it difficult for her to comfortably lie down. Mares are impregnated every year until their production declines, after which most are sent to slaughter. Many of their foals suffer the same fate, or are raised to eventually replace them on the “pee-line.” There is little oversight to ensure the welfare of horses in the PMU industry. U.S. Department of Agriculture Animal Care Policy states that “[h]orses used for the production of PMU are not covered by the AWA [Animal Welfare Act].” Regulations in both Manitoba and Saskatchewan simply refer to the industry’s “Recommended Code of Practice for the Care and Handling of Horses on PMU Ranches,” which was developed in part by Pfizer and Manitoba Agriculture.4